When did mathematicians transition from peg and rope to straightedege and compass?

In the 19th and 20th centuries, the student of classical Greek geometry used "straight edge and compass". A. Seidenberg uses the terminology "peg and cord" in proposing that altar construction motivated the development of classical Greek and Indian geometry. So one supposes that a transition occurred in which "peg and cord" were replaced by "straight edge and compass". Is this correct, and if so do we have evidence as to when this transition occurred?

The transition that occurred took place outside of mathematics, although it eventually affected mathematical practice and teaching. Seidenberg documents early construction practices that used pegs and ropes, and the traditional story is that Pythagoras learned geometry from Egyptian rope-stretchers. The story is not very credible, but it testifies to the Egyptian practices at the time, and the fact that they were known in Greece. Not much is known about drawing in construction practices during the classical and Hellenistic period, see Geometry in Greece The Use of Geometry by Ancient Greek Architects by Leonardis:

"The tools required for the actual drawing were simple. Drawings could be made using charcoal sticks made from grapevines, used widely in the Mediterranean even today as they provide a sharp, hard point. A pair of dividers could be used as a compass. Whitened boards were the likely surface for drawings that needed to be retained for a while... There is no doubt that ancient Greek architects used drawings in planning their work, though the nature of their drawings has sometimes been called into question (Coulton 1977: 51–73; Senseney 2011: 32–34). The discovery (noted earlier in the chapter) of incised drawings on the inner walls of the Temple of Apollo at Didyma finally confirmed what had been mostly speculative. The diagrams there are just that: diagrams that are representative of a long, confident tradition of both accurate drawing and geometry (Haselberger 1983, 1985, 1999). Vitruvius frequently refers to drawings with Greek titles that he and others could use for solving architectural problems."

What we do know is that classical geometers, from Eulid to Pappus, stayed away from either pegs and ropes or rods and dividers, and we know why. "Workman tools" were considered alien to "pure science" of geometry. Plato in the Republic disdained even the more abstract language of construction that we find in Euclid, who only talks about producing lines and describing circles without mentioning any tools:

"They speak, I suppose, very laughably and perforce, for they mention squaring, applying, and adding, and state all their claims as if they are engaged in action and fashioning all their proofs for the sake of action; but the fact is, I presume, that the whole science is pursued for the sake of knowledge".

This caused an early controversy between his heirs and Menaechmus, a prominent geometer of the time, see When were the concepts of pure and applied Mathematics introduced? Earliest copies of Euclid's Elements we have do not even have diagrams, and in practice geometers drew in the specially prepared sand.

Euclidean constructions spread into the architectural practice, as we can see already in Vitruvius, and during the middle ages this was continued in the largely oral tradition of stonemasons, see Medieval Architectural Geometry. The square and compasses symbol of freemasons was taken from the medieval stonemason guilds. The transition that eventually brought them "officially" into mathematics happened during the Renaissance. Architecture separated from masonry, and, together with perspective in painting, finally became worthy of science, the new science:

"As one has seen from Schmuttermayer’s and Roriczer’s booklets, (and other similar documents), by the late fifteenth century, in south Germany, the situation had changed. Non-qualified persons, unskilled in the traditions of masonry, were entering the field of the professional architect, and were introducing Classical Antique ideas from Italy. In reaction to this development the older architects were attempting to repress those ideas and maintain traditional skills by producing their instructional booklets on the importance and correct use of geometry in any design context... As the Renaissance gained strength and took control of European culture, bringing the printing industry, grammar schools, new drawing instruments, machinery, literacy, universities, and increased trade and travel, the architectural profession became separated from that of the mason. Books were published, such as Langley (1767) giving scholarly details of the classical Roman styles of architecture."

Early modern mathematicians did not have Platonic preconceptions about the nature of geometry, and were happy not only to take inspiration and tools from applications, but even to improve on them. The Sector: its History, Scales, and Uses gives a nice overview of the importation of "workman tools" into mathematics during the late Renaissance. Tartaglia proposed gunner's compass in 1537, the more familiar looking reduction compass was in use by mathematicians since before 1570, Galileo (and independently Thomas Hood), are known for inventing the more advanced sector compass in 1590s. From that time on the terminology of "straightedge and compass" gets attached to Euclid's dry language in geometry textbooks:

"Tartagula [sic!], in investigating the “new science” of artillery, describes a gunner’s quadrant used to set the elevation of cannon. This device (shown in use in Figure 2), which resembled a carpenter’s square with a quadrant attached, was often inscribed with various tables...

The reduction compass (Figure 3) was a pair of dividers with the addition of a number of sharp points that could be slid up and down the arms to provide a device capable of giving set measurements in proportion to how far the legs of the dividers were opened. As important was the fact that the sharp points entering a drawing at right angles provided repeatable, accurate, results. The reduction compass appears to have been invented sometime before 1570 as a precise drafting instrument and it soon became used for finding proportions between figures. The device is said to have fascinated Giordano Bruno because it was more accurate that other devices available at the time."

Figure 3 depicting Denorry's reduction compass from 1588 is reproduced below. 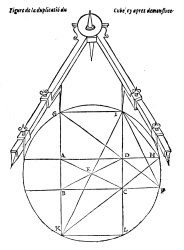 33
Why did the ancient Greeks originally become interested in conic sections?
6
When were the concepts of pure and applied Mathematics introduced?

11
When did architects learn how to calculate load on building members accurately?
12
Division of the circle and compass constructions
12
Why and when did some areas separate themselves from philosophy and some not?
3
When did mathematician start to draw figures from equation?
1
When were self-locking doors invented and when did they become commonplace?
7
When did architects first become aware of the usefulness of the catenary arch?
3
Straightedge and compass
6
Were epicycloids from astronomy acceptable curves in Greek geometry?
4
When and WHY did mathematicians start turning their attention to imaginary exponents?
1
Math-education comparsion between Japan and United States from perspectives of engineering contributions