Did Heisenberg defend that Germany should rule Europe?

The following has been attributed to the German physicist Werner Heisenberg:

History legitimizes Germany to rule Europe and later the world. Only a nation that rules ruthlessly can maintain itself. Democracy cannot develop sufficient energy to rule Europe. There are, therefore, only two possibilities: Germany and Russia, and perhaps a Europe under German leadership is the lesser evil.

Is this quote correctly attributed/better documented? Or is there any other evidence Heisenberg was this sort of nationalist?

The following is taken from

I added some paragraph breaks since the text is hard to read otherwise.

Heisenberg came to Holland in 1943. I believe he made use of the same arrangement for cultural exchange to visit his old friends. Although on principle we did not favor such exchanges, we were glad to see Heisenberg. I am convinced that he really cared how physicists in Holland were making out and might have tried to help in special cases (but he considered it was quite beyond his powers to do anything at all for Jewish physicists or their families). Kramers arranged a program for his visit.

I remember that I met Heisenberg and that we went for a brisk walk. I cannot retrace the itinerary, but in my mind it is associated with a curving road and a viaduct. I even have a feeling that I might recognize the spot today-if it were still there unchanged, which is improbable considering the extent of roadbuilding that has been going on in my country since the Second World War.

It was during that walk that Heisenberg began to lecture on history and world politics. He explained that it had always been the historic mission of Germany to defend the West and its culture against the onslaught of eastern hordes and that the present conflict was one more example. Neither France nor England would have been sufficiently determined and sufficiently strong to play a leading role in such a defense, and his conclusion was-and now I repeat in German the exact words he used-"da waere vielleicht doch ein Europa unter deutscher Fuehrung das kleinere Uebel" (and so, perhaps, a Europe under German leadership might be the lesser evil).

Of course, I objected that the many inequities of the Nazi regime, and especially their mad and cruel anti-Semitism, made this unacceptable. Heisenberg did not attempt to deny, still less to defend, these things; but he said one should expect a change for the better once the war was over. And one had to recognize that they were a consequence of the great power of the leader that was also part of the German tradition.

I cannot deny that I was somewhat impressed: I had always admired Heisenberg, not only as a physicist. For me he represented much of what was valuable in German culture. He was a good musician and a good sportsman, and his knowledge of classical languages was far superior to mine. But when later in the evening I thought over what he had said, I realized with a shock that his ideas came uncomfortably close to the usual German propaganda.

In later years I have often wondered why Heisenberg spoke the way he did. Did he still believe Germany was going to win the war? Then it would be understandable that he tried to console me by pointing out that this might not be altogether bad. And perhaps he might already have been thinking of the possibility of finding in me, in the long run, someone who could be of some help in rebuilding continental European research. After all, he had more or less offered me a position way back in 1934. The trouble with this explanation is that it no longer did look as if Germany were going to win and that Heisenberg had anyway been convinced from the beginning that Germany was going to lose. About this there can be little doubt: in this respect, his widow's recollections are in complete agreement with what I heard from former students of his, to whom he had said: "Once the United States gets into the war, as it is bound to do, it will be like a game of chess in which you start out with only one rook against your opponent's two." I was also told that one of the reasons he gave just prior to the war for not wanting to stay in the U.S.A. was that he felt that after the unavoidable defeat of Germany he would be able to do more for its cultural resurrection if he remained on the spot....

The third visitor was Hans Kopfermann. We knew each other fairly well. He was an experimental physicist, but he belonged to the Copenhagen clan: he had worked on spectra at Bohr's Institute, and was a specialist on hyperfine structures, a field in which I had done theoretical research. He came to Philips on some business connected with the purchase of scientific apparatus, and very discreetly, without showing that we knew each other, asked me whether he could see me in private. I went to see him at his hotel in the evening and proposed that we should go to my home for a quiet talk. While we were walking along the dark streets of Eindhoven, he said, "Won't you get into difficulties with your colleagues if they should find out that you are receiving a German at home?" I had a ready answer: "Now that you have said that, I don't care."

A genius is someone who can create things that are initially beyond his own understanding. In that sense Heisenberg was certainly a genius, and this goes but rarely together with a special gift for understanding the feelings and the ways of thinking of others. Heisenberg did not have that gift. Perhaps his greatest shortcoming was that he was unable to grasp the full measure of depravity of what was then the ruling group in Germany. A Europe under German leadership would have meant a Europe under Nazi leadership, and it would have been a horrible thing. That became increasingly clear thereafter. At the time of our meeting the persecution and annihilation of the Jews had not yet reached its climax.

Edit. I checked the book by Kurzman: There is no mentioning of any letters, he simply repeats what Heisenberg told Casimir. 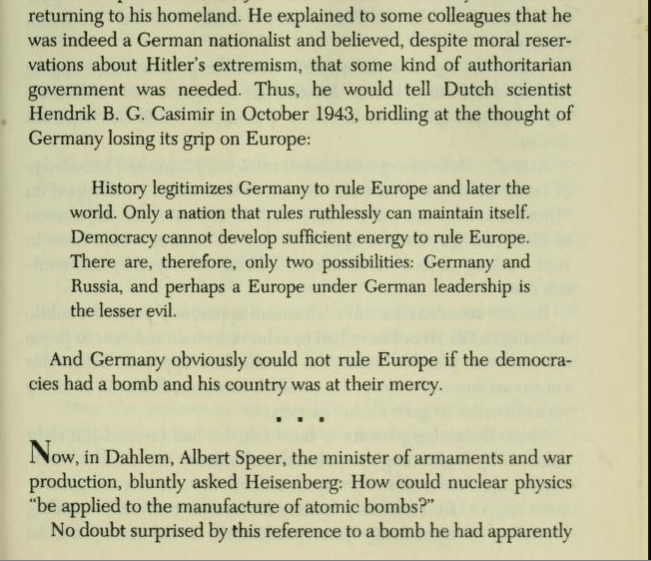 Not the answer you're looking for? Browse other questions tagged biographical-details physicists nazi-germany heisenberg or ask your own question.

9
How far did Nazi Germany get in researching the "sun gun?"
15
In what instances did Wolfgang Pauli say that something was 'not even wrong'?
6
Did Poincaré say that set theory is a disease?
2
When did Grace Murray Hopper say "The wonderful thing about standards is that there are so many of them to choose from?"
1
How did Francis Hauksbee know that mercury would glow in his electrostatic generator?
4
Did Heisenberg ever accept Schrödinger's formulation of quantum mechanics, or at least did he relax his negative views about it?
5
What actions and communications did Fibonacci undergo to introduce the Hindu-Arabic Number System to Europe?
2
How did J.J. Thomson learn that what he discovered was different than an atom or a molecule?