What were the applications of conic sections before Kepler?

When recently asked for a practical application of parabolas, I responded by talking about objects in free-fall. Afterwards as I was re-thinking this conversation it occurred to me that an object in orbit is also in a sort of free-fall, but its path is not parabolic but elliptical.

And a question began to form.

But during the very long interval between the first ancient Greek discussions of conic sections and the work of Kepler and Newton, what did everyone think that conic sections were good for? Were they interested in them purely as ideas, without thought of utility? That would be oddly beautiful and somewhat surprising.

I asked this question at another site, and (just before I was put on hold as off-topic) someone informed me of the Delian Problem, in which context a discussion of conic sections arose. I see a distinction which I cannot make perfectly clear, but here goes: that's a purely theoretical setting, of interest to mathematicians, while the applications in physics seem to answer more accessible questions, describing real things that exist outside of the heads of mathematicians. I'm wondering if such associations with conic sections existed before Kepler and his association of conic sections with (what would eventually be called) "inertial movement."

There is no doubt that ancient Greeks were primarily interested in conic sections for their intra-mathematical uses. Even aside from the Delic problem, the legendary motivation of the discoverer Menaechmus, Euclid and Apollonius explored their various properties for the sake of the art, and Pappus presents a classification of mathematical problems in the Mathematical Collection into plane (solvable with straightedge and compass), solid (solvable with conic sections) and the rest. But some extra-mathematical applications were known already in antiquity

"Besides the quite obvious presence of conic sections as the lines of the daily motion of the shadow of the tip of a gnomon on a plane surface that are usually represented on planar sundials for some special days in the year, such lines appear in a completely different context in one other type of ancient Greek sundials: For the largest group of sundials, the shadow receiving surface is part of the surface of a right cone whose axis directs towards the poles. Since all those sundials have a plane top surface that is parallel to the horizon, the intersection of those two surfaces is a non-circular conic section.

[...] Conical sundials make up the largest group (about 35%) among the preserved sun dials of the Greek type. The oldest sundials with a design as described above date to the beginning of the 2nd century BCE. Some conical sundials with different corpus forms are even slightly older... Due to the relative positions of cone and block, the edge between the conical surface and the planar top surface is a conic section. On the preserved objects we can observe three different types of curves: ellipses, parabolas, and hyperbolas" Rinner, Ancient Greek Sundials and the Theory of Conic Sections Reconsidered

This does not make sundials good candidates for motivating the discovery of conic sections, Menaechmus lived c. 350 BC, but they were in use by the time of Apollonius.

Despite the anecdotal story of Archimedes burning the Roman fleet with a parabolic mirror, our actual source is On Burning Mirrors by Diocles (contemporary of Apollonius), who attributes the discovery of the focal property of the parabola (without proof) to Archimedes's friend Dositheus. Although the study of mirrors was quite popular (Euclid wrote a treatise on the issue), the irony is that the focal property was likely discovered as a by-product of proving a property of parabola's tangents, a purely mathematical pursuit. The optical properties of ellipse and hyperbola also seem to have a similarly intra-mathematical origin, see How was the focus/directrix property of conic sections discovered? Ironically, it was Kepler who singled out the focal properties of conic sections as optical, and introduced the term focus (Latin for hearth), see Field, Two Mathematical Inventions in Kepler's 'Ad Vitellionem Paralipomena':

"Unlike Desargues, Kepler introduces the point at infinity in a context not of pure mathematics but of geometrical optics. Indeed, his reason for discussing conics in Ad Vitellionem Paralipomena is that they give possible shapes for burning mirrors, having the property that light emitted at one ‘focus’ (as Kepler was to call it) would be reflected to the other."

Ellipses did appear in astronomy before Kepler, albeit in a different capacity. According to Eudoxus's model, planets were attached to linked homocentric spheres that rotated at an angle to each other. This allowed to reproduce the retrograde motion of the planets without violating Plato's prescription of allowing uniform circular motions only for the celestial bodies. The projection onto the ecliptic of the latitudinal circle, along which the planet spins in the Eudoxian configuration, is an ellipse, see Yavetz, A New Role for the Hippopede of Eudoxus, although Eudoxus was not familiar with the concept. Yavetz remarks in passing that "a point on an epicycle that spins at twice the rate of its deferent in the opposite sense, traces the projection of an inclined circle. This gives another definition of the ellipse as a special kind of epicyclic motion"; and suggests that similar observations might have led Apollonius to simplifying Eudoxian spheres to deferents and epicycles. Menaechmus was a student of Eudoxus, and Riddell in Eudoxan Mathematics and the Eudoxan Spheres explains how homocentric configurations could lead to his construction of the solution to the Delic problem via conic sections. Of course, this is highly speculative.

Oblique view of shields and wheels appears already in ancient Greek pottery. Anaxagoras and Democritus apparently studied some basic geometry of perspective (skenographia), but their works are not extant. Euclid's Optics explicitly postulates that our field of vision is a cone, and in proofs of Propositions 18-21 he even uses a plane cutting this cone of vision. Nonetheless, conic sections are never explicitly mentioned, see Euclid's Optics and its Compatibility with Linear Perspective by Brownson. Ptolemy, when using the stereographic projection for his maps in Geographia, emphasizes that the tropics, the ecliptic, the equator, the arctic and the antarctic circles have an "egg-shaped" form on the map. Whether he was aware that the "eggs" are ellipses is unclear, but it was within his means to prove. Arabic commentators Ibn Sarjûn and al-Kindî discuss the perspective of a wheel and characterize it as an ellipse explicitly, see Why Did Geometrical Optics not Lead to Perspective in Medieval Islam? by Raynaud:

"Ibn Sarjûn and al-Kindî use the words mu‘awwaj 'distorted' and manhir 'deviated', instead of nuqsân 'ellipse, lack', to refer to the appearance of the circle. So they describe the ellipse by the angle formed by the visual ray falling on the centre of the circle and the line perpendicular to the circle's plane, what presupposes an affine transformation $K = fa / fb = gc / gd$ (Fig. 2). This geometrical property was known from Archimedes' Conoids and Spheroids, prop. 4 (1970: 166-170) and Ibrâhîm b. Sinân expounded on it in his Maqâla fîrasm al-qutû‘al-thalâtha (Epistle on the Drawing of the Three Sections) (Rashed and Bellosta, 2000: 263-89)."

Of course, Renaissance scholars and painters were much much more explicit and comprehensive about the circle perspective. Alberti's grid construction of an ellipse as circle's perspective from De Pictura (1435) is shown below. It is interesting that Kepler himself introduced the perspectival points at infinity in the aforementioned discussion of conic sections in Ad Vitellionem Paralipomena. 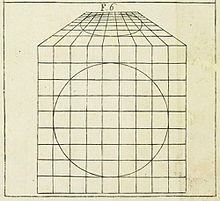 Apparently the conic sections were invented for solving the equation $x^3=2$ (Delian problem), which is pure mathematics, of course. (Menaechmus, 4th century bc).

Some other applications may include construction of sundials (the end of the gnomon shade moves approximately on a conic section in the plane), some authors claimed that this application could be the primary reason for considering them, but there is little evidence for this point of view.

Another is the property of an elliptic mirror to focus the light from a source at one focus at another focus, and the corresponding property of parabola that rays become parallel. There is a legend that Archimedes used this last property to burn Roman ships during the siege of Syracuse. Of course this is impossible in practice, but the existence of the legend shows that this "real world" application was at least known theoretically to the ancient writers (Diocles, 2-3d centuries bc). It could be used to focus the light of a lighthouse, but we do not know whether it was actually used in lighthouses in antiquity or medieval times. I suppose nothing of those antique lighthouses survives, and know no detailed ancient descriptions of their construction.

Not the answer you're looking for? Browse other questions tagged astronomy euclidean-geometry or ask your own question.

33
Why did the ancient Greeks originally become interested in conic sections?
6
How was the focus/directrix property of conic sections discovered?
4
What were the applications of ellipses before elliptical orbits were discovered?

19
What data did Kepler work out his laws from?
33
Why did the ancient Greeks originally become interested in conic sections?
4
What were the applications of ellipses before elliptical orbits were discovered?
6
Why didn't Euclid's Elements treat conic sections?
3
What are historical applications of geometry to measuring distances beyond human reach?
2
Were people aware of the "mistakes" in Euclid's Elements before the start of the formalization of Mathematics?
0
Were Kepler's Laws of Planetary Motion the first formal definition of an ellipse?