What was worldwide supply of disk storage in 1969?

I'd prefer a year-by-year graph, something like (not necessarily the "demand", just "supply")...
https://www.statista.com/statistics/751749/worldwide-data-storage-capacity-and-demand/
Google found me that, which goes back to 2009, but I couldn't get it to cough up anything going back as far as 1969 (or even earlier).

But a box of 2000 80-column cards, even if binary-punched, would store 160KB, whereby a GB requires 6250 boxes. And, wow, I don't recall ever seeing that many boxes of cards in one place (or maybe ever at all, for that matter).

I asked the question with respect to disk because of an off-the-cuff remark I made to a co-worker that my home-office disk capacity of ~75TB (mostly backups, six 10TB WD EasyStore's, a few 4TB 2.5" externals, plus about 10TB of internal disks) might well exceed the entire planet's disk capacity back in 1969, when I got my first computer job.

That conjecture was met with extreme skepticism. But I figured that at ~1GB/datacenter (which may well be an overestimate), and maybe ~35,000 datacenters worldwide in 1969, I might even have double the entire planet's disk capacity back then. (Note: I also couldn't google the number of datacenters in 1969, but seem to vaguely recall hearing something like ~35,000 back at that time).

The numbers seem roughly in line with my remark above about a "vague recollection" of 35,000 datacenters worldwide during the illustrated timeframe. And if we then also accept my perhaps-generous guesstimate of 1GBdisk/datacenter, then my home office disk capacity of 75TB pretty much equals the total planet's disk capacity circa 1968.

Of course, the predictable hockey-stick shape of this curve quickly overwhelmed my little boast. But it's still kind of interesting to contemplate, i.e., a mind-boggling way to illustrate how incredibly far and fast the technology has advanced. I could instead say that my desktop i7 is about a million times faster than the IBM 1620 I first programmed in the fall of 1966. And that's indeed impressive, but doesn't quite capture the imagination in the same way as saying my home office disk capacity equals the entire planet's disk capacity in that same year. 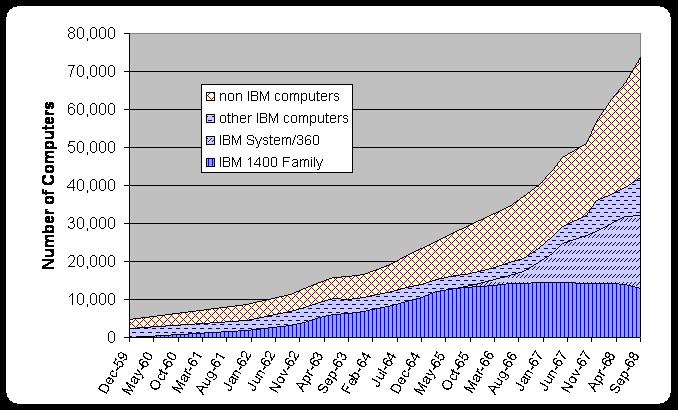 Browse other questions tagged computers or ask your own question.

21
What happened to analog computers?
4
What/When was the first radio nav system capable of triangulating your position?
1
What technologies were used before JavaScript?
4
What technology did researchers use to write scientific papers before the computer?
13
What was the first electronic computer?
2
Was a work of Ada Lovelace and Charles Babbage inspiration for pioneers of modern computing?