What is the history of staircase or 𝜋=4 paradox?

The staircase 'paradox' has been discussed here and elsewhere a few times (search for staircase + paradox).

My question is whether this puzzle has been discussed in the academic literature or historically in mathematics. I can't find any reference to it except in fora, but I want to reference it in a paper.

The "staircase paradox" (or "Pythagoras paradox") name appears to be recent, so it is hard to search for it. Wolfram calls it "diagonal paradox", but that may be conflating it with a different paradox due to Leibniz, which he used to argue against the actual existence of indivisibles, see The Philosophical Assumptions Underlying Leibniz's Use of the Diagonal Paradox in 1672. The horizontal zigzag/sawtooth variant appears to be older, Lebesgue reports it from as early as 1890-s. Mathpages calls it limit paradox and Lukowski (p.13) paradox of approximation. Koch's snowflake construction (1904) uses a related idea, as does Mandelbrot's "coastline paradox", which he attributes to Richardson (1961). In 1890 Schwarz gave a construction, which can be seen as a clever 2D generalization of the sawtooth paradox, of polyhedral surfaces inscribed into a cylinder and converging to it (Schwarz lanterns), with the surface areas growing to infinity, see Surface Area and the Cylinder Area Paradox.

Friend in Numbers: fun & facts (1954), p.72 gives the sawtooth paradox under the title "the field of barley". Lakoff and Núñez in Where mathematics comes from (2000) discuss a variation with semicircles as a "classic paradox of infinity". It "shows" that $π=2$. Their version, along with the sawtooth version "showing" that $2=1$, appears in Paradoxes and Sophisms in Calculus, pp. 30-31. In 1997 there was a lively pedagogical discussion involving it in MAA journals, see On Arc Length by Barry and references therein. Barbeau in the Fallacies, Flaws, and Flimflam section of CMJ mentions the Lebesgue story that Dave Renfro is probably recalling:

"A request to the newsgroup math-history-list@maa.org elicited responses from John Conway, Roger Cooke, Mark McKinzie, and Rick Otten, who provided the following references. L. C. Young [7, 8] quotes an anecdote from Lebesgue's book, In the Margin of the Calculus of Variations, in which the paradox was presented as a "joke" at the College de Beauvais."

The Young's book is Lectures on the Calculus of Variations and Optimal Control theory (1981), p.152, and he quotes Lebesgue directly (see image below):

"All my papers [on this subject] are connected with a schoolboy's 'joke.' At the College de Beauvais, we used to show that, in a triangle, one side is equal to the sum of the other two. Let $ABC$ be a triangle. If $A_1, B_1, C_1$ are the mid-points of its sides, we have $$ BA+AC = BC_1 + C_1A_1 + A_1B_1 + B_1C. $$ On each of the triangles $BC_1A_1, A_1B_1C$, proceed as on $ABC$. We obtain a broken line, formed of eight segments, and equal to $BA + AC$. By continuing in this way, we obtain a sequence of broken lines, which stray less and less from the side $BC$, and which still have as length the sum of the two other sides of our original triangle. The pupils at Beauvais concluded from this, that the segment BC, the geometrical limit of our broken lines, had as length the sum of the two other sides $BA + AC$. My schoolfellows saw there no more than a good joke. To me, the argument appeared most disturbing, since I could see no difference between it and proofs relating to the areas and surfaces of cylinders, cones, spheres, and to the length of a circumference."

Lebesgue's En marge du calcul des variations does not seem to be translated into English. It was only found after his death and published in 1963. Four of the six chapters were previously published as papers.

At the end, Lebesgue probably refers to the classical approximations of arc lengths and surface areas by the "method of exhaustion". In the calculus of variations there was active work at the time on the isoperimetric problem that raised related analytic issues. It turned out that the classical proofs, from Zenodorus to Steiner, had gaps concerning existence of limit figures. Weierstrass and Edler gave first rigorous proofs for curves in 1879 and 1882, and Schwarz for surfaces in 1890. 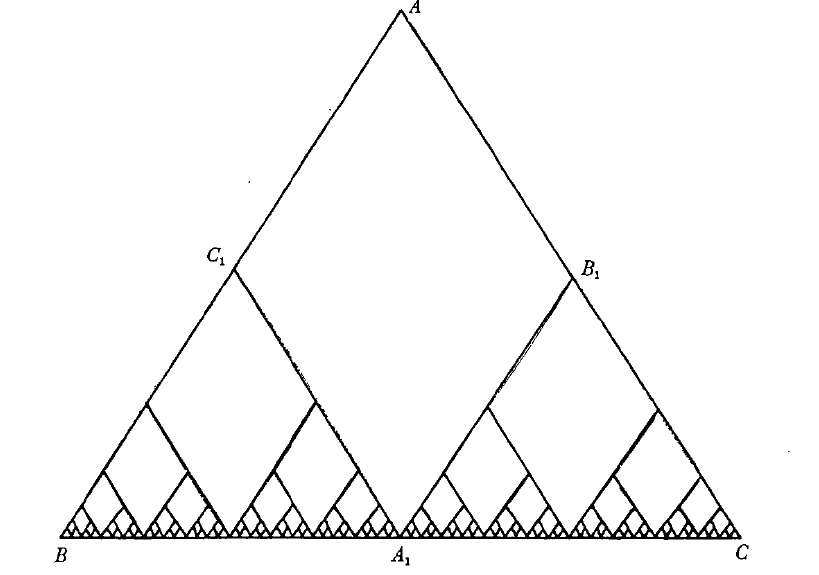 This is a follow-up to some of my comments to the OP and to the answer that @Conifold gave. A few days ago I purchased a copy of the book that I had mentioned, Measure and the Integral by Lebesgue (1966). I was correct that this book is where, many years ago (1980s, possibly even late 1970s), I had read about Lebesgue's fascination with this “paradox”. However, contrary to what I thought, Lebesgue's fascination is not discussed in Kenneth O. May's biographical essay, but instead it appears in Section 66 on pp. 97-98. Those wishing to read more about these issues involving arc length and surface area will find Chapter V: Lengths of Curves. Areas of Surfaces (Sections 62-83; pp. 92-124) especially instructive. Below is all of Section 66, followed by some bibliographic information about this 1966 book.

66 A similar paradox for lengths. $\;\;\;\;$ If mathematicians had not been hypnotized by the word “inscribed,” if they had not forgotten that inscribing had been chosen only as one way of approximating, they would have seen that the difficulty encountered for areas existed equally for curves. Now it was just this difference between curves and surfaces that was most shocking. Allow me to refer to my own recollections.

When I was a schoolboy, it was agreed in France, as I have said [previously], that one could evaluate lengths, areas, and volumes by passing to the limit. Soon doubts began to appear in the textbooks. The students who had heard Schwarz’ objections in Hermite’s analysis course had now in their turn become teachers. Besides, everything then predisposed us to a critical analysis of concepts: researches on functions of a real variable and on sets, which people were beginning to consider, Tannery’s teaching, which had aroused in many of his students the desire for complete comprehension or at least verbal precision. People began to doubt, sometimes without knowing what they doubted. For example, the determination of the area of a circle by means of the areas of the polygons that it contained or that contained it (see section 42) was confused with an argument about limits.

Formerly, when I was a schoolboy, the teachers and pupils had been satisfied with this reasoning by passage to the limit. However, it ceased to satisfy me when some of my schoolmates showed me, along about my fifteenth year, that one side of a triangle is equal to the sum of the other two and that $\pi = 2.$ Suppose that $ABC$ is an equilateral triangle and that $D,$ $E,$ and $F$ are the midpoints of $BA,$ $BC,$ and $CA.$ The length of the broken line [= polygonal path] $BDEFC$ is $AB + AC.$ If we repeat this procedure with the triangles $DBE$ and $FEC,$ we get a broken line of the same length made up of eight segments, etc. Now these broken lines have $BC$ as their limit, and hence the limit of their lengths, that is, their common length $AB + AC,$ is equal to $BC.$ The reasoning with regard to $\pi$ is analogous.

Nothing, absolutely nothing, distinguishes this reasoning from what we used to evaluate the circumference and area of a circle, the surface and volume of a cylinder, a cone, and a sphere. This result has been extremely instructive to me.

Besides, every paradox is highly instructive. In my opinion, the critical examination of paradoxes and the correction of erroneous reasoning should be standard exercises, frequently repeated at the secondary level.

The preceding example shows that passing to the limit for lengths, areas, or volumes requires justification, and, like Schwarz’ example, it is enough to arouse all one’s suspicions.

Not the answer you're looking for? Browse other questions tagged calculus geometry differential-geometry or ask your own question.

13
Why did Newton want lines to be generated by continued motion of points rather than by apposition of parts?
7
What are the modern connections of the Pentagramma Mirificum studied by Gauss?
2
English equivalent for a German idiom concerning integration
5
Did Michel Rolle say that the calculus is "a collection of ingenious fallacies"?
0
Reference request concerning an alleged Jewish contribution to the early theory of light refraction, and to the first geometry textbook in Europe
8
What does "organic" mean in old texts when describing plane curves and their construction?