In NCERT textbook for class X mathematics, it is given that Baudhayan gave the relation between the hypotenuse square and sum of squares of the other sides of a right angled triangle. Is it true? 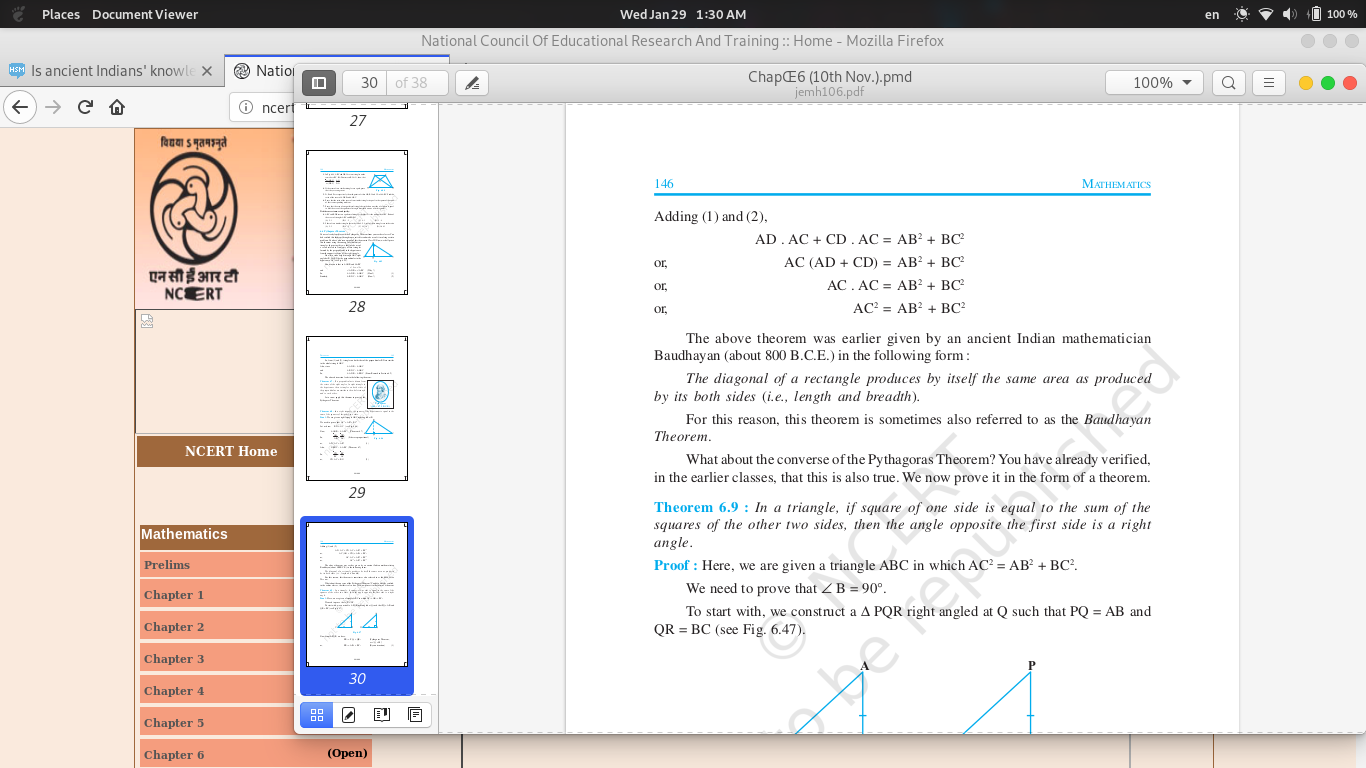 As you can see, a lot of websites which support Baudhayan as original discoverer are either Indian or Hinduism oriented, so they may not be valid sources. The Wikipedia articles are not in this category, but an answer has asserted that Wikipedia is a major source of biased information about Indian science and mathematics.

The textbook you quoted is that of high school and probably written by high school/college teachers. Most of these side notes are often traditional hearsay. As a good scientist of future, do not trust whatever appears in books and Wikipedia should be your last resort to verify historical facts.

Are they all true? If yes, did they have any effect on other scientists whom we know today? And why Indians are then given less or no credit in books and articles?

Sorry to say but most of those ancient "inventions" are bogus. Wikipedia has become a major source of this non-sense. When someone tries to challenge that discovery, it is reverted. The problem with very old historical stuff is that there is no proof. Suppose a nation A claims today that they invented sines and cosines thousands of years ago. What is the proof? Is there any surviving manuscript? You see the problem with very old historical stuff including the origins of a certain concepts and giving due credit where it is due is one of the most difficult questions in history. Human history is often dependent on the author. You have to be critical when you read a rosy picture of any civilization.

Recently, there are series of rather ridiculous claims in History of Science and Mathematics, and even Physics that everything originated in ancient India. Claims range from invention of alegbraic formulae, sine, cosine, numbers, astronomy, distance between Earth and Sun, ancient air crafts, stem cell research and above all close relationship of German and Sanskrit. Usually Wikipedia and other dubious sources are quoted. BBC even made a report on it, sadly this is being propagated by some obscure university professors.

However the easy question is what is the contribution of modern Indian scientists?

Some Indian scientists during the time of British made really major discoveries while working in India such as Sir Chandrashekhara Venkata Raman (Raman effect), Bose (physicist), Meghnad Saha (Ionization equation), Ramanujan and many others. Yes they faced difficulties in publishing in major journals and even faced inappropriate comments. However, later on they earned the respect from a majority of the scientists in the world.

An example is that of the interview of Arthur Compton's wife. She recalled her encounter with Raman as Ref: C. V. Raman and the Discovery of the Raman Effect, Phys. perspect. 4 (2002) 399–420,

" In an interview in 1968, although she could not at first remember Raman’s name, she stated: Anyway he [Raman] was very dark, just as black as could be, but he had a beautiful Scotch accent. He would be asking questions from the back of the hall, and it was so disconcerting to have this person, black as coal, with this beautiful Scotch accent. He was the one who said, ‘‘Compton, you answer questions well; you’re a good debater, but the truth isn’t in you.*’’

Today such labels would not be acceptable such as "black as coal" in any community.

Not the answer you're looking for? Browse other questions tagged ancient-india pythagorean-proposition or ask your own question.

23
Did ancient/medieval non-European cultures have a concept of energy? If so, what are the similarities and differences to the modern concept?
8
Why did India miss the Great Revolution in Maths and Science?
8
On Einstein's proof of the so-called Pythagorean theorem
7
Did Indian astronomers realize the sphericity of the earth independently of the Greeks?