How could the Roman Empire manage their accounting without a proper number system?

I wonder how the Romans were able to control so vast territories, peoples, armies, ammunition, taxes, etc., without the help of a number system that allowed easy computing (e.g. multiplication and division) of (relatively) large quantities.

Romans used tricks for arithmetic that worked well enough, see Roman Numerals and Arithmetic on ScienceBlogs. Addition and subtraction was quite simple, as for multiplication:

Division is the biggest problem in roman numerals. There is no good trick that works in general. It really comes down to repeated subtraction. The only thing you can do to simplify is variations on finding a common factor of both numbers that's easy to factor out. For example, if both numbers are even, you can divide each of them by two before starting the repeated subtraction. It's also fairly easy to recognize when both numbers are multiples of 5 or 10, and to do the division by 5 or 10 on both numbers. But beyond that, you take a guess, do the multiplication, subtract, repeat."

But for the more serious calculations they did have the Roman abacus and reckoning boards. They effectively implemented a base 10 system. Here is a reconstruction of a Roman hand abacus, made by the RGZ Museum in Mainz from the bronze original held by the Bibliothèque nationale de France in Paris. Many counter beads are missing. 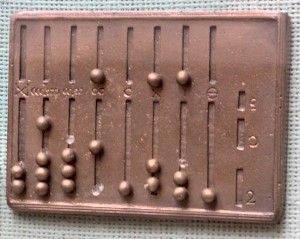 "For more extensive and complicated calculations, such as those involved in Roman land surveys, there was, in addition to the hand abacus, a true reckoning board with unattached counters or pebbles. The Etruscan cameo and the Greek predecessors, such as the Salamis Tablet and the Darius Vase, gives us a good idea of what it must have been like, although no actual specimens of the true Roman counting board are known to be extant. But language, the most reliable and conservative guardian of a past culture, has come to our rescue once more. Above all, it has preserved the fact of the unattached counters so faithfully that we can discern this more clearly than if we possessed an actual counting board. What the Greeks called psephoi, the Romans called calculi. The Latin word calx means 'pebble' or 'gravel stone'; calculi are thus little stones (used as counters)."

Not the answer you're looking for? Browse other questions tagged roman-empire or ask your own question.