Who was Heinrich Kornblum?

Heinrich Kornblum was a student of Edmund Landau who is known for his generalization of Dirichlet's theorem on primes in arithmetic progressions to function fields. He was born in Wolow, Poland in 1890, and he died in 1914 as a soldier in WWI at the age of 24 before he had a chance to write up his work, which was to be his doctoral thesis. Landau edited and published his results posthumously as Über die Primfunktionen in einer Arithmetischen Progression.

This is, as far as I can tell, the sum total of all knowledge that has been preserved about Heinrich Kornblum. I cannot find any other papers written by him, and every source I have seen that mentions him cites only the narrative I have reproduced above. Does anyone know any more information about him, or is he a tragic mathematician lost to history?

The Göttingen Digitalization Center provides a digital scan of the paper H. Kornblum: "Über die Primfunktionen in einer arithmetischen Progression." Mathematische Zeitschrift 5 (1919), 100–111 online. The first page features a footnote by Landau that provides a few biographical details: Heinrich Kornblum was born in Wohlau on August 23, 1890. He volunteered at the start of the war and fell in October 1914 near Poël-Capelle.

Wohlau (today: Wołów in Poland) was a small town in the Prussian province of Silesia, which in 1890 had about 2,500 inhabitants according to the German Wikipedia. It is located in the vicinity of Breslau (today: Wrocław in Poland). Poël-Capelle appears to be an older spelling of Poelkapelle, a municipality in Flanders (in Belgium). In October 1914, the area around Poelkapelle and Langemarck was involved in the First Battle of Ypres.

I managed to locate a digital scan of the annual report for the school year 1908-1909 of the high school Kornblum attended in his hometown of Wohlau:

Among the list of graduates on p. 13, we find Heinrich Kornblum, born August 23, 1890. He attended the school for nine years and graduated Easter 1909. His father is listed as a physician (general practitioner) residing in Wohlau, and he intended to study mathematics. The family appears to have been well-off, because on p. 12 it is stated that Kornblum's father donated 25 marks to the school.

In the report, there are indications that Kornblum was an excellent student. On p. 11 we read that he did not have to participate in the oral part of final exams, which (to my knowledge) was a privilege only accorded the best students. Also on p. 11 we learn that Kornblum was awarded a prize in the form of a book "Deutschlands Seemacht" (German Naval Power) by Georg Wislicenus on the occasion of the birthday of his majesty the emperor (back then, January 27).

Kornblum's father was likely Dr. Hermann Kornblum, who had been approved as a resident physician in Wohlau in 1883, per an official notice published in Berliner klinische Wochenschrift, vol. 20, no. 17, p. 260. He may be identical with Dr. Hermann Kornblum whose medical dissertation from 1878, "Zur Aetiologie und Therapie des Cephalämatoms Neugeborener" at the University of Breslau was reviewed in Schmidt's Jahrbücher der in- und ausländischen gesammten Medicin, vol. 182 (1879), p. 111. Possible confirmation is an entry in a list of practicing physicians in Dr. Paul Börner's Reichs-Medicinal-Kalender für Deutschland, Leipzig: George Thieme 1887, p. 127 which states:

where "78" appears to refer to (by comparison with other entries) 1878, the year of his dissertation.

Based on the dissertation records of the University of Breslau, Hermann Kornblum was born on March 2, 1854 in Branitz in Silesia (today: Branice in Poland). I found that the attended the "Königliches Gymnasium" in the Silesian town of Ratibor (today: [Racibórz] in Poland), from which he graduated Easter 1873 with the stated intention to study medicine in Breslau. His deceased father is listed as "Kaufmann" (merchant, shopkeeper) in Branitz.

It is interesting to note that Hermann Kornblum's graduation record shows his religious affiliation as Jewish, while Heinrich Kornblum's graduation record shows his religious affiliation as protestant. A potential sister of Heinrich Kornblum is Fri[e]da Kornblum, born September 23, 1888 in Wohlau in Silesia whose father is listed as "Sanitätsrat", an honorary title that in Prussia was often accorded physicians in private practice after twenty years of practicing their profession. She became a physician and was later restricted in her professional practice under Nazi laws on account of her Jewish ancestry.

The answer given by njuffa is very convincing and attractive to me, but just in case if someone is interested to know exactly and briefly what Kornblum's mathematical contribution was, then she/ he can read page 130 of the book "Number Theory 2: Introduction to Class Field Theory" (by Kazuya Kato, Nobushige Kurokawa, Takeshi Saito) (I can not be sure about the writers' historical comments): 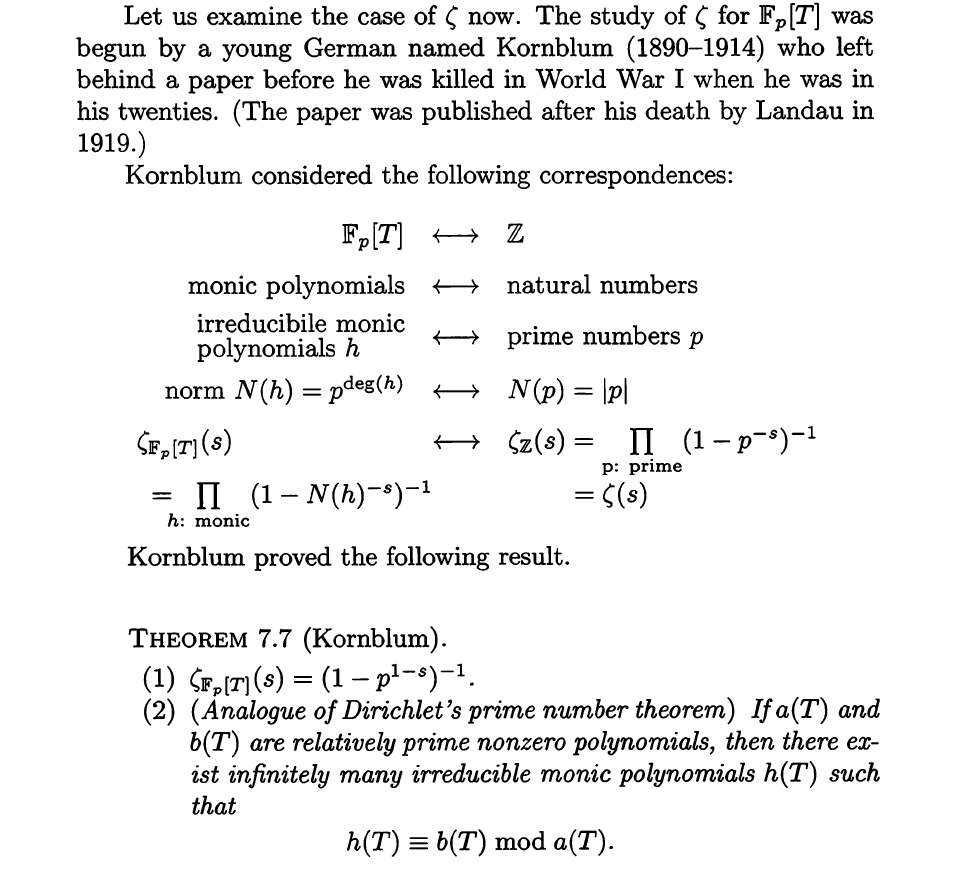 Not the answer you're looking for? Browse other questions tagged mathematicians mathematics-social-history 20th-century or ask your own question.

6
What insight of Watson and Crick was missed by Franklin?
7
Who was L. Aubry?
0
Who was the first person who emphasis the importance of proof?
2
Who was Hans Bauer who worked on the Perron integral?
12
Who was that forgetful mathematician?
4
Who was Paul Gerwien?
3
Who was E. Busche?
2
Who is the Dottie number named after?