How large were the differences in the orbit of Uranus which led to the calculation of the existence of Neptune?

And observers of Uranus began to notice that Uranus was deviating from its calculated positions. Eventually the possibility that an undiscovered planet was perturbing the orbit of Uranus was used by Adams and Le Verrier to calculate the orbit of Neptune and led to the discovery of Neptune.

Starting off with a crude order-of-magnitude estimate, the anomalous acceleration of Uranus ($m_1$) due to Neptune ($m_2$) should be on the order of $Gm_1m_2/a^2$, where $a$, a scale for the distance between the two planets, can be taken to equal the radius of Uranus's orbit. The secular trend probably vanishes, so let's take the time of interaction to be on the order of Uranus's orbital period, which is given by Kepler's laws. Then ignoring universal factors of order unity, the displacement of Uranus should be $\Delta x\sim (m_2/m_S)a$, where $m_S$ is the mass of the sun. This results in an angular displacement $\Delta\theta\sim\Delta x/a\sim m_2/m_S\sim 10''$.

In terms of actual observation, here is a graph of the residuals from Danjon, 1946: 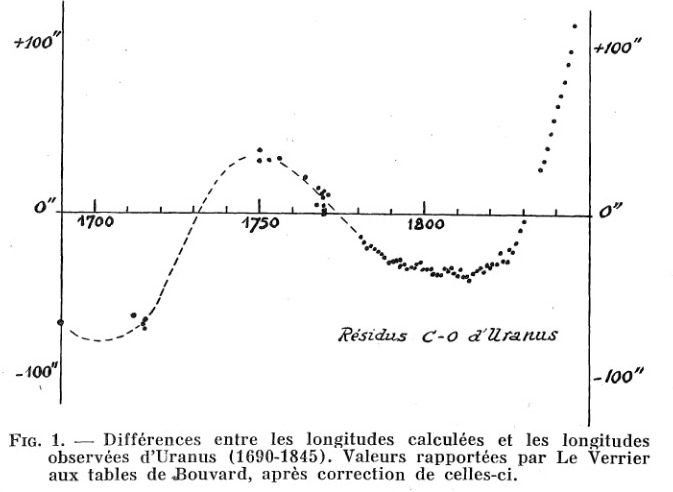 The simple order-of-magnitude estimate agrees reasonably well with the observations. Presumably people at the time did some kind of estimate similar to this in order to estimate $m_2$, and the fact that it was on the right order of magnitude for a planet encouraged them to hypothesize a new planet.

The relative orbital period $1/(1/T_1-1/T_2)$ is 170 years, which seems to equal, to within a factor 2, the time-scale for the observed oscillations in the residuals. This could have been estimated from Bode's law, which would further support the hypothesis of a new planet.

What seems to be a much more difficult problem is to estimate the new planet's orbital elements and the uncertainty of those elements, hence the controversy between supporters of Adams and Le Verrier.

This topic is extensively discussed by astronomer, historian, and Marxist theorist Anton Pannekoek in his 1961 book A History of Astronomy on pp. 359-363 and his 1953 article "The Discovery of Neptune".

LeVerrier and Adams both used these calculations and observations to predict an orbit of the hypothetical planet, but it is important to remember that these predictions contained many unknown variables that depended on the other variables, like mass of the hypothetical planet, its average distance from the sun and its eccentricity. To nevertheless compute an orbit, they used the at-the-time well-known Titius-Bode law that stated that the orbits of planets in AU followed the equation $$a = 0.4 + 0.3 \times 2^m$$ with m being -∞ for Mercury, 0 for Venus, 1 for Earth, 2 for Mars, 3 for Ceres, Pallas, Juno, and Vesta (which were considered planets), 4 for Mars, 5 for Jupiter, 6 for Saturn, and 7 for Uranus. It would therefore make sense that the new planet should have a semimajor axis of 38.8 AU (m=8).

Following LeVerrier's predictions, Galle of the Berlin Observatory indeed found a unmarked star in the region where LeVerrier had predicted the new planet would be. After tracking the star for months, however, astronomers quickly realized that the star was a planet but that it followed a different orbit than predicted. It turned to be smaller and nearer than the calculations predicted. Pannekoek illustrated this with a diagram: 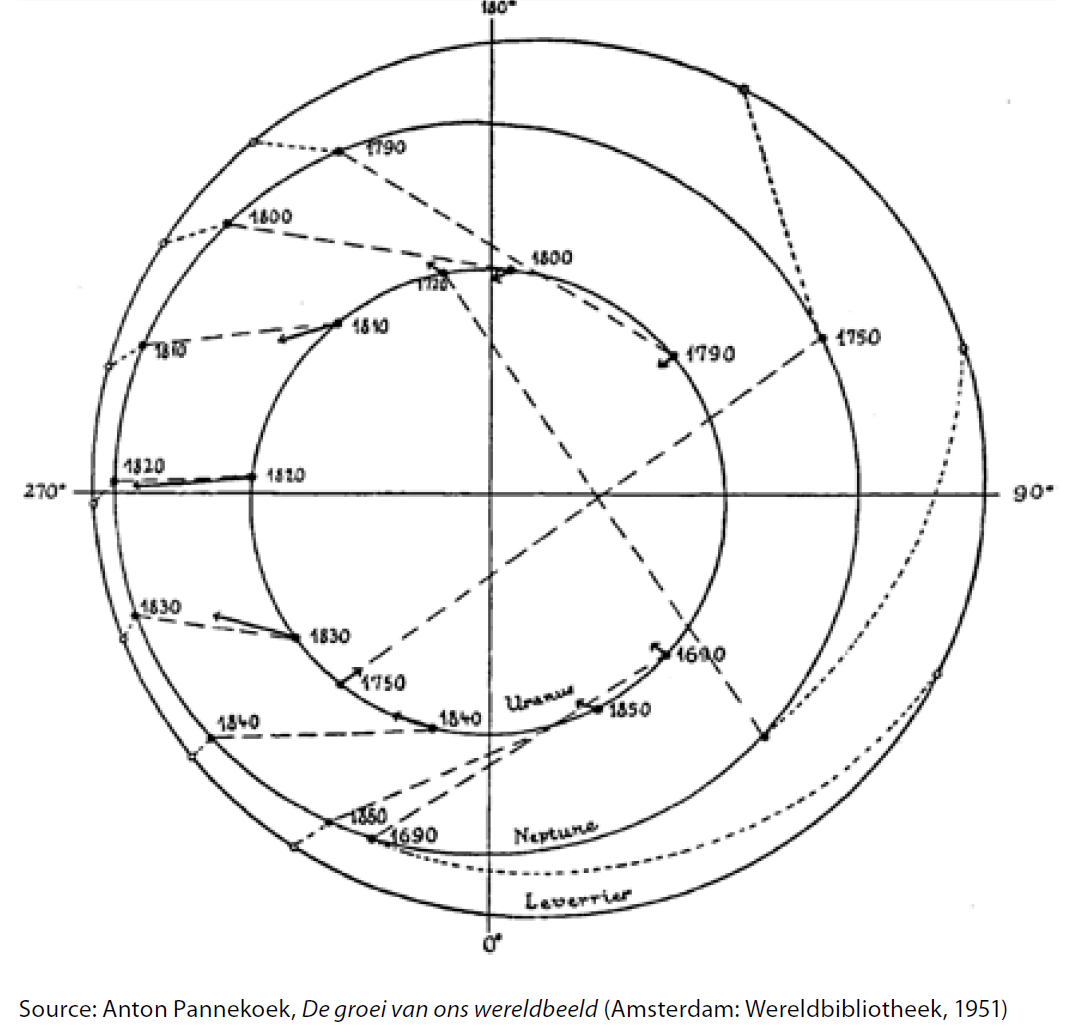 This realization that the orbit was completely different than predicted led to a whole new discussion on whether LeVerrier and Adams had indeed discovered the planet, or that this was a new planet was a different object altogether.

Pannekoek goes into this discussion from a Marxist perspective and attempts to explain it by invoking the social circumstances of the various astronomers involved. France is in the middle of the 1848 revolutions and the bourgeoisie want to illustrate the power of the natural sciences against received wisdom, which explains why LeVerrier is so adamant at prompting Galle to find the new planet and why the French resist the argument that the calculated and the observed planets are different objects. Britain, meanwhile, already had a revolution in the seventeenth century and has the bourgeoisie already entrenched in government, which explains why Adams was only interested in theoretical astronomy and not so much the observational verification. The United States on the other hand had started as a bourgeois and democratic society where debate was important, so it made sense that American astronomers would challenge the idea that the calculated and observed planets are the same.

For discussions on Pannekoek's interpretations, see:

It is possible that some persons here might not understand the scale of deviations in the answers, So I decided to post an answer myself using the data from the two answers so far to explain the scale a little bit more.

The answer by Ben Crowell makes a rough calculation that the displacement should be on the order of ten arc seconds. It also has a plot of the variation in longitude of the observed and predicted positions of Uranus over time, which seem to differ by up to a few tens of arc seconds from predicted positions.

The answer by cktai states that according to his source the deviation between the calculated and the observed orbit was 30 arc seconds in 1835 and 70 arc seconds by 1840.

And I guess that gives some idea of the scale of the deviations which were considered a problem and which led to the discovery of Neptune.

Not the answer you're looking for? Browse other questions tagged astronomy or ask your own question.

19
How did Kepler "guess" his third law from data?
25
What attracted Einstein to the anomalous precession of Mercury?
5
How important was the prediction of Neptune in 1846 for the Oxford evolution debate?
0
Were people in the ancient or medieval times aware of how exactly a solar year is equal to a lunar year?
2
What astronomical reason led to the creation of the trigonometric sine and cosine?
3
Was Newton's successful calculation of precession of equinoxes a fluke?
8
How did Eratosthenes determine that Alexandria and Syene were on the same meridian?
2
How accurate was the measurement of the period of Earth's orbit in the 19th Century?