Who is the lady on the image? [closed]

Ask Question
Asked 9 months ago
Active 9 months ago
Viewed 6k times
7
$\begingroup$
Closed. This question is off-topic. It is not currently accepting answers.

Want to improve this question? Update the question so it's on-topic for History of Science and Mathematics Stack Exchange.

I stumbled upon the following napkin (yes, a napkin) and was wondering who the lady on the picture is: 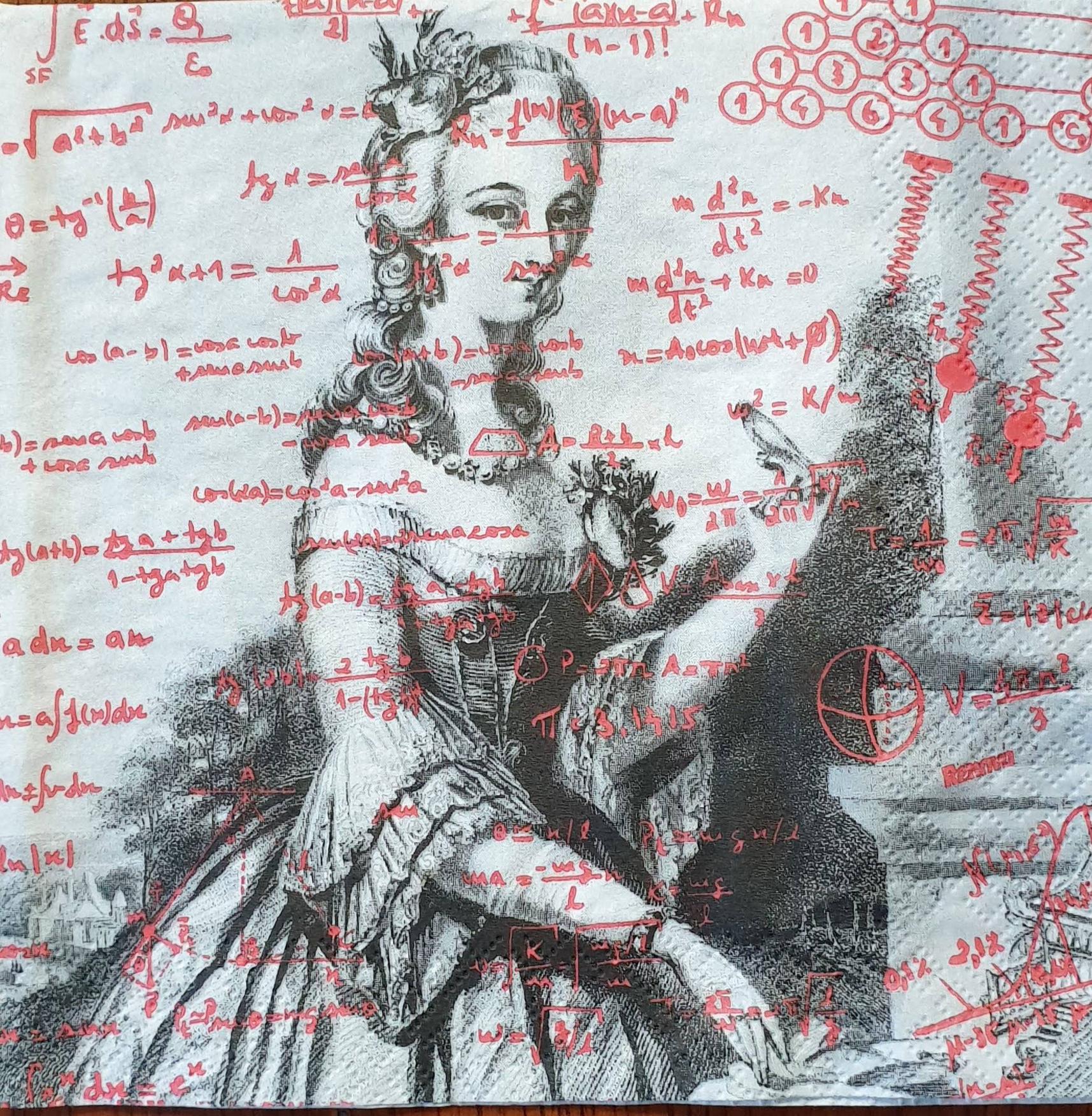 She is surrounded by some basic mathematical functions, as well as physical equations which relate to some drawings (mostly mechanics, and specifically dynamics).

The napkin is not related to any particular event (a dinner linked to some historical events in science for instance) so it may very well be that this is something a graphical artist came with - without any links to science.

This is a stylized picture of a generic pretty lady of the mid 1700's, created in the mid 1800's to illustrate a sentimental poem in a book collection of such for the amusement of genteel young ladies. It is not a portrait of any particular person. A modern equivalent would be the cover illustration on an airport novel.

The original of this image, captioned "Lady of the Court of Louis XVth", appears in Fisher's drawing room scrap-book 1848 illustrating the poem "The Message" by Miss A. D. Reynett. See here for bibliographic info. Another version (in The Gallery of Engravings, a.k.a. The Peoples Gallery of Engravings, Second Series, ed. by Mrs Milner ) appears here. Reynett's initials are given here; she is probably the Reynett described here.. The fine print at the bottom shows the engraving was by H. Robinson (see also here), after a drawing by J.J. Penstone.

I think it is unlikely this is Marie Antoinette, who was famously a person of the court of Louis XVI, or of Émilie du Châtelet.

For what it's worth, the poem itself says:

LADY OF THE COURT OF LOUIS XV.

When thou, dear Bird, art privileged to stand
On the white fingers of that fairy hand,
Forget not then, thy Master's fond behest,
Who pines far off, and knows nor joy nor rest.
Say that I trust her, who was borne away
By nearer friends, to shine in conquest's ray;
Say, though the tinsel chain of Fashion bind
Her outward form, I know her heart and mind;
Say that I love her, tho' we meet no more;
Say that I prize her, tho' hope's dream is o'er ;
Say that I think of her — where'er I go ;
Say that I sigh for her, in joy or wo;
Say when I stand amidst the gayest throng ;
Say when I listen to the sweetest song;
Say when I feel soft music's magic tone,
I hear her, see her, think of her, alone;
Say, ( tho’ I dare not breathe my thoughts aloud,
A solitary soul - amidst the crowd;)
That her loved form, which fills at once my heart,
Holds me, for ever, from that crowd apart:
My guardian Angel breaks all earthly spells,
And purifies the temple — where she dwells!

Note: I had just learned about Google image search, and on my first try-out got numbers of hits, some with captions citing "Gallery of engravings, vol. 1" (in English, on some Spanish- and Russian-language equivalents of Pintarest). Once I realized "Gallery of engravings" could be a publication title I went to Hathi Trust.

As for the larger question of "so what"? This image, a sentimental drawing of a stylized un-named pretty lady of the mid 1700s, was created and published in the mid 1800s, came into the public domain, and entered collections of stock images in the internet era. Now, in the last decade, a napkin seller has used a formula-defaced version of this image as a napkin design, declaring it to be an image of Marie Antoinette. It is possibly evidence of a kind of geek-chic mentality of the 2010's, perhaps meant to be evocative of the napkins at a place like the Scottish Cafe where Borsuk and Ulam caroused (but I suspect that cafe had cloth napkins, not paper ones).

Her best remembered achievement was a translation of Newton's Principia which (according to Wikipedia) is still considered to be the standard French translation.

6
Question related to the legitimacy of a certain portrait of Christian Goldbach
1
Who discovered the Rayleigh-Taylor instability?
3
Who introduced the partition function?
7
Who was this man (who is not Bruno Pontecorvo)?
2
Scientists who made a mark in the world despite their disabilities
2
Who is the father of fiber optics?
4
Who discovered the wave equation?