(I asked this question in the general Mathematics forum, but I have been advised to post it here instead -- or as well.)

In David Wells's "Curious and Interesting Puzzles", Penguin, 1992, his Puzzle 38 is taken from a work (unspecified) by Abu'l-Wafa Al-Buzjani (but I suspect it could be "A Book on Those Geometric Constructions Which Are Necessary for a Craftsman"), reproduced, apparently, in J.L. Berggren: "Episodes in the Mathematics of Medieval Islam", Springer, 1986.

"Construct an equilateral triangle inside a square, so that one vertex is at a corner of the square and the other two vertices are on the opposite sides."

This is one of the three constructions provided in the solutions: 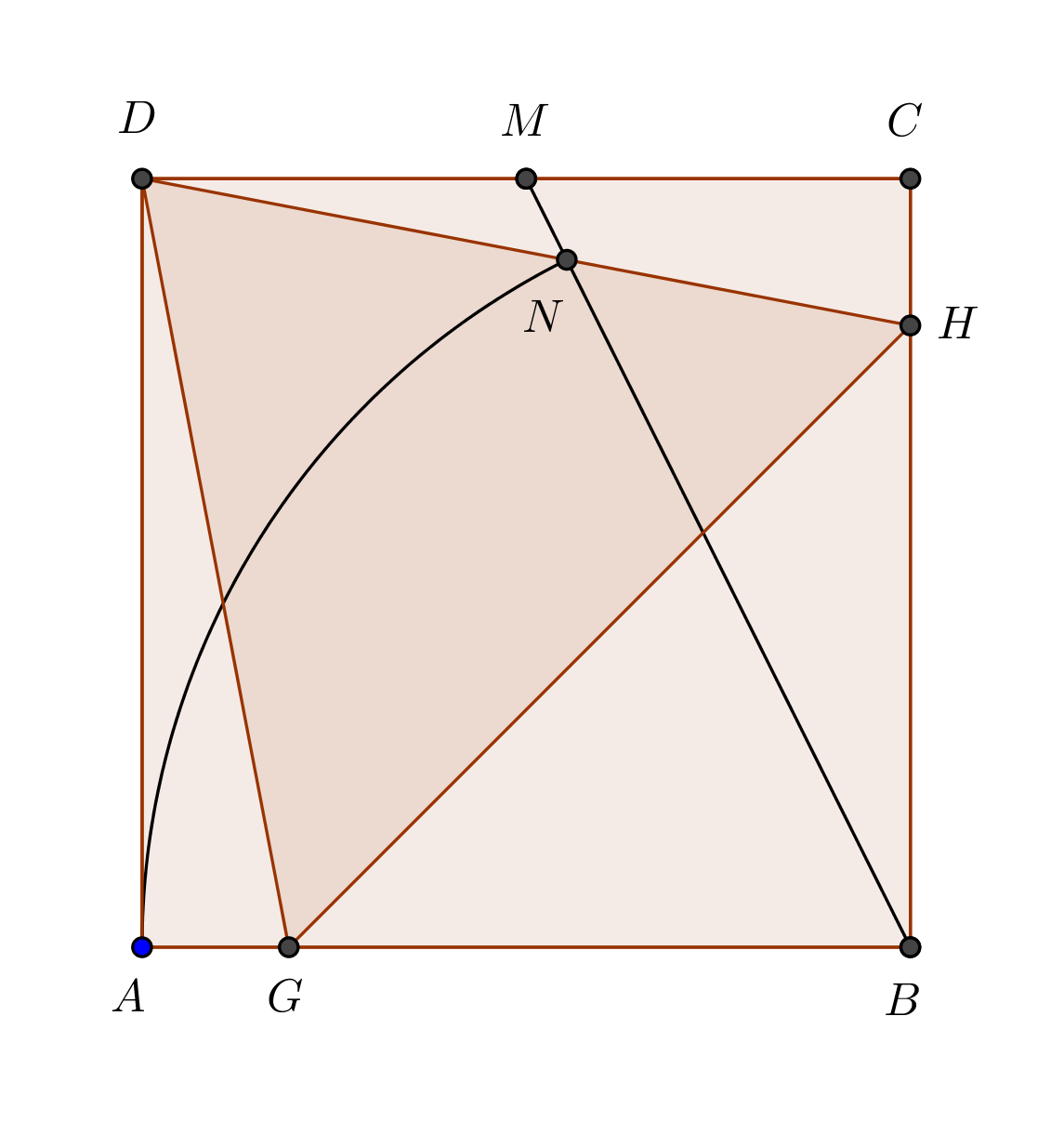 $DH$ is then one side of the equilateral triangle, where $DG = DH$ is one of the other sides.

So clearly this is a mistake. (Wonderful though Wells's books are, they are often riddled with errors, from simple typos and misattributions through to bad mathematics.)

I have been unable to find online copy of either Abu'l-Wafa Al-Buzjani's work or J.L. Berggren's (and at this stage I am unable to hunt it down in a library, and unwilling to get a copy of my own), so I have not been able to find out whether the mistake is Wells's (mistranscribing the construction), or whether it has been sitting there all this time in Abu'l-Wafa Al-Buzjani and nobody has noticed it, or halfway between the two.

Is anyone able to throw any light on what is shown in those source works -- and if the error is in there as well, has anyone else ever noticed this?

Or even: am I the one to analyse this all wrong?

(Also, can anyone suggest the appropriate tags to place this under? I've hunted around for good ones, but I can only find the one. Please bear with me, I'm new here, and I'm afraid I'm an autodidact.)

Wells' book is available for download on PdfDrive. Puzzle #38 appears in the section of problems attributed to Abū al-Wafā and is preceeded by the comment that "he is best known for his study of geometrical dissections and of constructions with a rusty compass, meaning a compass which is so stiff that it can be used with only one opening". In the solution section he adds "Abul Wafa gave five different solutions. Here are three of them". There is no citation except for "[Berggren, 1986]" at the bottom of the page after the three solutions. As indicated in the OP, this apparently refers to Berggren's Episodes in the Mathematics of Medieval Islam. Similar citation appears under #45. Some others (#41,#42) have "[Wells, 1975]", which is his own article On Gems and Generalisations in Games and Puzzles magazine.

Berggren's book is available on ResearchGate (one can download from it after registering). In it section 8 of chapter 3 is entitled Geometry with a Rusty Compass and features five problems from Abū al-Wafā's On Those Parts of Geometry Needed by Craftsmen on pp. 107-111. They are:

At the end he adds "Abū al-Wafā”s treatise contains a wealth of beautiful constructions for regular ngons, including exact constructions for n = 3, 4, 5, 6, 8, 10. It also gives a verging construction for n = 9 which goes back to Archimedes and the approximation for n = 7 that gives the side of a regular heptagon in a circle as equal to half the side of an inscribed equilateral triangle." Some of these do appear as Wells's "puzzles" (#44,#45), but apparently not #38 or several others. Nor does it appear as an exercise to the chapter 3, or in chapter 5 on trigonometry, where Abū al-Wafā is also featured. Presumably, Wells got the missing ones from somewhere, perhaps even directly from Geometry Needed by Craftsmen, but he does not say.

Remark. An internet search finds a Russian translation of this book of Abu'l Wafa,

This is a collection of translations. But this book I could not find on Internet.

Remark: since the true solution involves a construction of $2-\sqrt{3}$ with a compass and ruler, which is easy, it is plausible that Abu'l Wafa had a correct construction which was distorted by some scribe, or translator, or by Wells himself. But there is no answer to this unless we get some translation of Abu'l Wafa.

6
How the Cross-Ratio appears in the Work of Pappus?
22
Why is the Pythagorean Theorem so ubiquitous?
3
Classical source for theorem on three parallel lines cut by two transversals
9
On Einstein's proof of the so-called Pythagorean theorem
3
Straightedge and compass
3
Does any extant Greek text prove that the area of an inscribed regular polygon increases with the number of sides?
4
What was the old system of using right circular cones to solve problems about circles in the plane?
3
What are historical applications of geometry to measuring distances beyond human reach?