Where did the contour integral sign appear for the first time?

A simple question: Where did the contour integral sign appear for the first time? 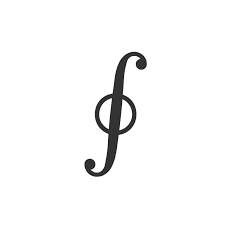 Does anyone know if this is true? Is there a scientific paper or a book where this symbol was introduced?

Jeff Miller's very valuable collection of the origins of mathematical expressions has the entrie "Integration around a closed path":

Dan Ruttle, a reader of this page, has found a use of the integral symbol with a circle in the middle by Arnold Sommerfeld (1868-1951) in 1917 in Annalen der Physik, "Die Drudesche Dispersionstheorie vom Standpunkte des Bohrschen Modelles und die Konstitution von H2, O2 und N2." This use is earlier than the 1923 use shown by Cajori. Ruttle reports that J. W. Gibbs used only the standard integral sign in his Elements of Vector Analysis (1881-1884), and that and E. B. Wilson used a small circle below the standard integral symbol to denote integration around a closed curve in his Vector Analysis (1901, 1909) and in Advanced Calculus (1911, 1912).

Even if Cauchy actually used contour integrals, he didn't use the symbol: what we know as "Cauchy's integral formula" was proved in Cauchy, Sur les integrales qui s'etendent a tous les points d'une courbe fermee, Camp. Rend., 23 (1846), 251-255, you can see here that Cauchy simply used the standard integration symbol.

Until at least 1905 that symbol was not in use, see this paper of Dimitrie Pompeiu where Cauchy's formula is stated using the standard integration symbol.

Not the answer you're looking for? Browse other questions tagged mathematics physics notation calculus or ask your own question.

7
Who replaced the solid Halmos QED symbol with the open one?
28
Who first defined the "equal-delta" or "delta over equal" ($\triangleq$) symbol?
2
Why is differentiation under the integral sign named Feynman's trick?
8
In which 1644 publication did Pietro Mengoli first pose the Basel Problem?
5
Earliest Instances of a Slope/Direction Field for a First-Order ODE
7
History of a contour integral method for summing series
6
Where did the term "set-builder notation" come from?
3
Yuktibhāṣā, 16th century, first modern proof of $\frac{\pi}4=\int_0^1 \frac{dt}{1+t^2}=\sum_{n\ge 0} \frac{(-1)^n}{2n+1}$
0
Was Einstein's "Maschinchen" a predecessor of the photomultiplier tube?