What did Delaunay invent Delaunay triangulations for before computers were developed?

I was teaching my students about Delaunay Triangulation which is a method for dividing a surface into triangles. This triangulation method is the basis of most computer calculations that require a surface to be approximated as small elements. Here is an example 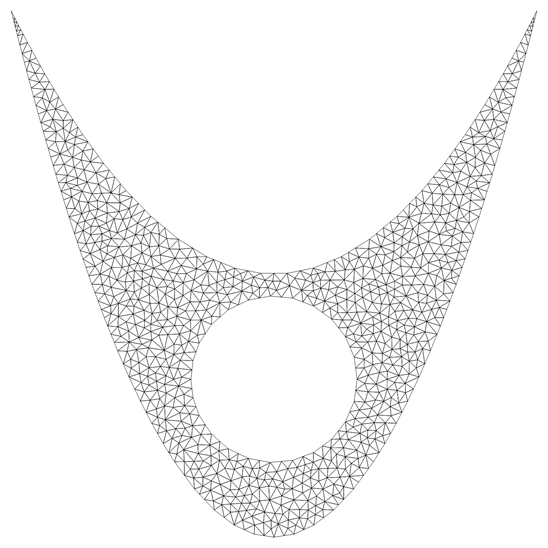 I pointed out that Delaunay's contribution was made in 1934. One student asked why Delaunay would be working on a computer method well before computers were invented. This is a good question that I was wondering if anyone on this site could answer.

The Wickipedia article on Boris Delaunay does mention that he worked on crystal structures so this may be a connection but that is just my speculation. It is interesting that his ideas should be so widely used in areas well outside his interests.

Why did Boris Delaunay work on the very modern topic of triangulation of surfaces when there were no computer methods in his day?

Delaunay (Gallicized version of Russian Delone) did not invent them, they were used long before 1934. Delaunay triangulations, or more generally tesselations, are dual to Voronoi diagrams, the circumcenters of Delaunay triangles are the vertices of the Voronoi diagram. One can infer the motivation from the very title of Delaunay's 1934 paper: Sur la sphere vide. A la memoire de Georges Voronoi.

Dirichlet used such diagrams for regular lattices to study 2D and 3D quadratic forms in 1850 (although they were occasionally used before), and Voronoy introduced a multidimensional generalization in 1908, the year of his death, along with the dual Delaunay tessellations. Delaunay met Voronoy at the University of Warsaw as a teenager, and was strongly influenced. So much so that Mathematical Genealogy Project lists Voronoy as his thesis advisor, even though he defended well after Voronoy’s death. Delaunay's contribution was to study Voronoi diagrams and their duals for irregularly placed points or sites, but even he used them before 1934, e.g. in Neue Darstellung der geometrischen Kristallographie, Z. Kristallograph., 84, 109–149 (1933).

Voronoi diagrams were sporadically used even before Dirichlet, as far back as Kepler and Descartes. Kepler even used Delaunay tessellations to study the shapes of snowflakes and the sphere packing problem. They were also discovered and rediscovered in gold mining, crystallography, metallurgy and meteorology long before computers, e.g. Wigner and Seitz introduced Voronoi diagrams induced by the atoms of a metallic crystal in 1933, without any knowledge of Delaunay's work. See Voronoi diagrams and Delaunay triangulations by Liebling and Pournin for details of applications and a historical sketch.

Not the answer you're looking for? Browse other questions tagged geometry computation or ask your own question.

19
What sorts of calculations called for the invention of logarithm tables?
28
How did Napier come to invent logarithms?
8
What were Riemann's other two submissions for his habilitation?
6
What did Lobachevsky do?
4
What is the most number of digits of a mathematical transcendental constant that have been required for a real computation?
8
How did Eratosthenes determine that Alexandria and Syene were on the same meridian?
1
What were the typical ways students were taught the elements when it remained the prime textbook of mathematics?
2
Were people aware of the "mistakes" in Euclid's Elements before the start of the formalization of Mathematics?
0
Why were early electronic computers mutually incompatible?