Note: I didn't write the word "ancient" in the title because I want to see the notation from 1400 A.D. to 1700 A.D.
Mathematical notation has changed very much from the past millennium, and new notations are made for new concepts. For example, there was a time when the notations for representing numbers was different in different regions. I saw somewhere a piece of a page from one of Euler's books or articles: 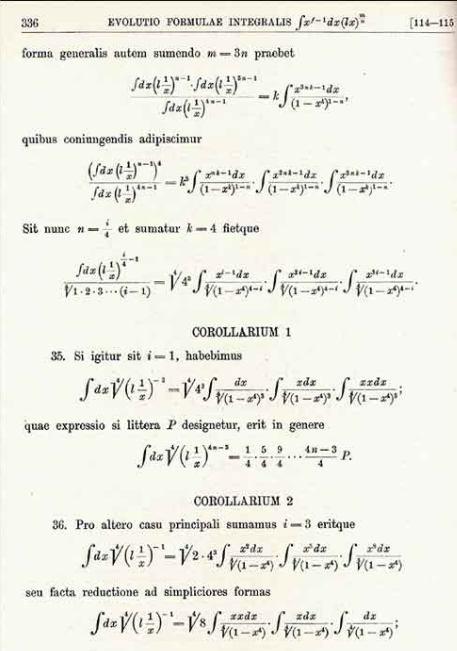 This is very close to modern notation, but not same as it (for example, the root symbols are larger). After seeing this page, a question cam in my mind:

These differences are to be mentioned:

I. Notes on notation and English terms in 1800s literature (primarily related to series)

The following is from the introductory comments for something involving conditionally convergent series I was working on several years ago.

the term be wanting = the term is absent

steadily towards = monotonically towards

The following list is from near the beginning of this mathoverflow answer.

the set exists = the set is not empty.

Not the answer you're looking for? Browse other questions tagged mathematics notation big-list or ask your own question.

38
What was Euler's motivation for introducing $i$ for $\sqrt{-1}$?
7
Why is calculus missing from Newton's Principia?
4
What were the criticisms against the introduction of "vector analysis"?
29
Who first defined the "equal-delta" or "delta over equal" ($\triangleq$) symbol?
6
Examples of when the development of math notation accelerated progress in math research?
13
Was English mathematics behind Europe by many years because of Newton's notation?
4
Has any large group of people used a base other than 10, 20 and 60 for ordinary purposes?
25
When was the first recorded use of subscript in mathematics to represent index?
2
Different conventions between Fourier Transform and Characteristic Function