Could 17th century astronomers in the Netherlands predict solar eclipses a few months in advance?

In the 17th century Netherlands, could the astronomers, or sailors trained in stellar navigation, predict either total or partial (at least 40% obscured) solar eclipses over the the town of Aardenburg (about halfway between Bruges and Vlissingen), in the Dutch province of Zeeland), six weeks (or more) in advance?

While I've seen Edmond Halley being credited for being the first to accurately predict an eclipse in Europe, "Halley wasn’t the first to map a solar eclipse, either, with such charts having appeared since the 17th century." The Guardian

The short answer is yes. Under the following conditions:

Let me state the problem more exactly: suppose that a solar eclipse of at least 40% WILL occur within a year from now. Could some person in the second half of 17th century make this prediction with 100% probability?

a) prediction for short period (few months, perhaps up to a year).

b) possession of a good angle measuring instrument (they were not common in 17th century, they started to make them in the middle of 17 century, and they were custom made. (The Royal observatory was founded in 1675, and this was the first such establishment in Europe). And certainly few people possessed such instruments. (They started using them in navigation only in the middle of 18th century).

c) very few people had necessary knowledge, certainly not common navigators, not speaking of astrologists. One of such people was Edmund Halley, by the way, I can name few others: Newton, Flamsteed (Astronomer Royal), Thomas Harriot (1560-1621), perhaps 10 or 20 others in Europe by the end of 17th century. There is no doubt that a few of them were in Netherlands.

In principle, the motion of Sun and Moon with necessary accuracy for such predictions was known at the time of Ptolemy, but his parameters were not exact. One needed a good instrument to measure these parameters. Published tables of sufficient accuracy were not available yet. (They appeared only in 18th century, for example the tables produced by the same Royal observatory, or analogous tables in France).

So the answer is yes, this was possible in principle, in the second half of the century, but required a very special person with special knowledge, possessing rare and expensive instruments.

Remark. It is very different for Lunar eclipses, which could be predicted since the times of Ptolemy.

I found that a prediction of a solar eclipse was made Nicholas Culpeper for the April 8, 1652 eclipse in England. At first I was confused by the date, thinking the prediction was wrong, then realized it is the Julian Date which corresponds to the Georgian date in April. 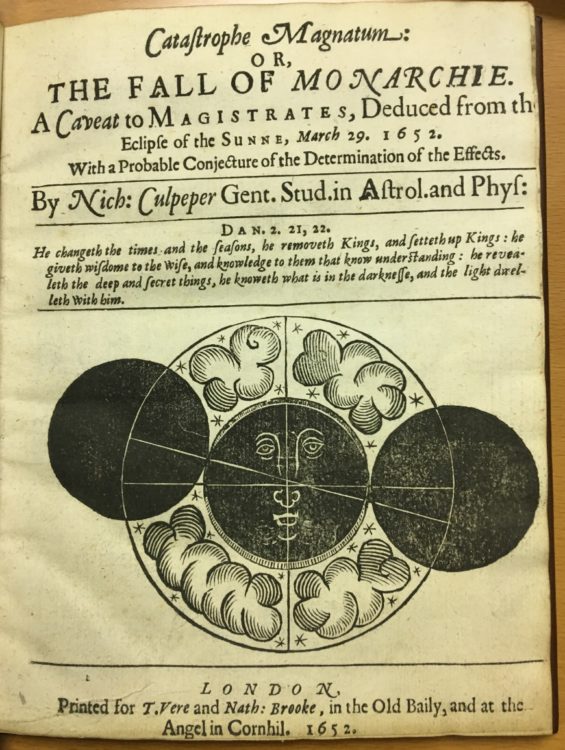 One problem in the 17th century was that astronomers didn't know the scale of the Sun-Earth-Moon system. The approximate sizes of the Earth and the Moon and their approximate average distance had been known since antiquity, but I doubt whether the exact distance between the Moon and a point on the Earth's surface at any specific time could be precdicted very accurately. And more important, it was known that the Sun was many times farther than the Moon, but there was not yet any reasonably accurate measurement of the Astronomical Unit, the distance between the Sun and the Earth. This meant that astronomers couldn't use geometry to predict the width of the Moon's shadow on Earth.

They could use reports of the width of the Moon's shadow in previous eclipses, but that varied according to the exact distances between the Earth, hte Moon, and the Sun in each eclipse, and those distances vary due to the ellipical orbits of the Earth and the Moon.

Some information about the history of eclipse predicitons.

One of the first accounts of an eclipse—though one should note that this might be an old wives tale—dates back to 2136 B.C. Legend has it that the Emperor Chung K’ang executed his royal astronomers, Hi and Ho, for failing to predict an eclipse.

The eclipse of Thales was a solar eclipse that was, according to The Histories of Herodotus, accurately predicted by the Greek philosopher Thales of Miletus. If Herodotus's account is accurate, this eclipse is the earliest recorded as being known in advance of its occurrence. Many historians believe that the predicted eclipse was the solar eclipse of 28 May 585 BC.1 How exactly Thales predicted the eclipse remains uncertain; some scholars assert the eclipse was never predicted at all.35 Others have argued for different dates,[6] but only the eclipse of 28 May 585 BC matches the conditions of visibility necessary to explain the historical event.[7]

Answers to this question discuss the history of eclipse predictions:

The Antikythera mechanism (/ˌæntɪkɪˈθɪərə/ AN-tih-kih-THEER-ə) is an ancient Greek hand-powered orrery, described as the first analogue computer,1 the oldest known example of such a device24[6][7][8][9][10][excessive citations] used to predict astronomical positions and eclipses for calendar and astrological purposes decades in advance.[11][12][13] It could also be used to track the four-year cycle of athletic games which was similar to an Olympiad, the cycle of the ancient Olympic Games.[14][15][16]

A total lunar eclipse occurred on 1 March 1504, visible at sunset for the Americas, and later over night over Europe and Africa, and near sunrise over Asia.

Christopher Columbus, in an effort to induce the natives of Jamaica to continue provisioning him and his hungry men, successfully intimidated the natives by correctly predicting a total lunar eclipse for 1 March 1504 (visible on the evening of 29 February in the Americas). Some have claimed that Columbus used the Ephemeris of the German astronomer Regiomontanus,1 but Columbus himself attributed the prediction to the Almanach by Abraham Zacuto.2

On 30 June 1503, Christopher Columbus beached his two last caravels and was stranded in Jamaica. The indigenous people of the island welcomed Columbus and his crew and fed them, but after six months, the natives halted the food supply.4 Columbus had on board an almanac authored by Abraham Zacuto of astronomical tables covering the years 1475–1506.4[6] Upon consulting the book, he noticed the date and the time of an upcoming lunar eclipse. He was able to use this information to his advantage. He requested a meeting for that day with the Cacique, the leader, and told him that God was angry with the local people's treatment of Columbus and his men[citation needed]. Columbus said God would provide a clear sign of displeasure by making the rising full Moon appear "inflamed with wrath"[citation needed].

Not the answer you're looking for? Browse other questions tagged physics astronomy 17th-century navigation or ask your own question.

3
Did a boat full of Louis XIV's Jesuits and some Siamese dignitaries plan on seeing a solar eclipse on May 17, 1687
0
When did Europe start accurately predicting solar and lunar eclipses?