Does Hadamard claim that Pascal could have discovered non-Euclidean geometry?

In The psychology of invention in the mathematical field, p. 53, Hadamard makes the following claim: 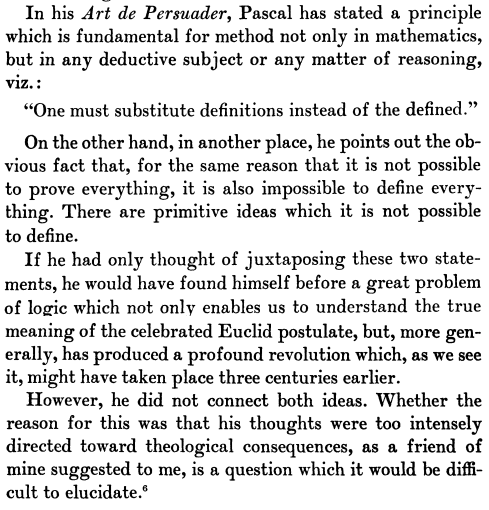 Is his point that there must, in any axiomatic theory, be undefined terms, and if you write the parallel postulate entirely expanded, i.e., with definienda substituted for definiens, then you will see that its not a truth of logic? But that seems completely off. You may still "see" that its a truth for perceptual space (let us grant, for the sake of the argument), and moreover, you may still fail to see that it isn't implied by the other axioms+logic. Thus, while you may arguably conceive of the possiblity of non-Euclidean axiom systems, you might still not yet perceive that of non-Euclidean geometries (qua sciences of space); and in fact, without a proof of relative consistency of these systems, e.g. by an inner model in Euclidean geometry, or by a model in R, you aren't technically allowed to even assume so much as the possibility of these systems, since (lacking such proof), the PP might -- for all you know -- after all be a consequence of the other axioms, just that you haven't found the proof yet (which we know in fact doesn't exist).

Edit: Upon further reflection, perhaps his point is simply that the notion of formal axiomatics is implicit in Pascal's ideas? But what is all this business with "the true meaning of the celebrated Euclid postulate" about, then? Is there another postulate that could be meant?

Hadamard's proposes that if Pascal juxtaposed two of his ideas he could have confronted the "great problem of logic" and understood the "true meaning" of the parallel postulate, i.e. its meaning under the modern axiomatic method. Before addressing Hadamard's proposal let me explain the differences between modern understanding of mathematics and Pascal's, which, I believe, Hadamard overlooks.

People today tend to underestimate the magnitude of the Copernican revolution in mathematics initiated by Hilbert. Instead of centering mathematics on concrete objects sketched out definitionally, with axioms as mere shortcuts for streamlining arguments about them, Hilbert turned them into the new center. The objects then became formal shells circumscribed by the axioms only, so "lines" and "points" can be seamlessly replaced by "desks" and "chairs". The revolution came with a quick and thorough memory wipe of what came before, possibly because it was not opposed by powerful cultural institutions, as in the case of Copernicus or Darwin.

The modern idea of pre-Hilbertian mathematics is of deducing theorems from axioms much like now, only with axioms vague and incomplete and proofs informal and gappy, but with steady tightening up of the rigor until axiomatic ideal was finally reached. That this was not the case is witnessed by Frege's objections to Hilbert's approach in the Frege-Hilbert correspondence (1899-1900), and even by Russell's Principia (1910-13) that still followed the old paradigm in Frege's footsteps. The second part of Russell's quip — "The method of "postulating" what we want has many advantages; they are the same as the advantages of theft over honest toil" — is often quoted, out of context, but its meaning is largely forgotten. What Frege and Russell wanted was "honest toil" of constructing mathematical objects by "genetic" definitions (like Dedekind's construction of real numbers) instead of now familiar "theft" of formal axioms treated as "implicit" definitions. On the original, Euclid's, understanding of axioms and their role in geometry see What caused or contributed to Euclid's Elements and Synthetic Geometry falling into disfavor?.

The conception of mathematics at the time of Pascal's writing is described in De Risi, Leibniz on the Parallel Postulate and the Foundations of Geometry:

"Contrary to our modern understanding of the role of an axiom as an indemonstrable statement, they claimed that geometrical principles were self-evident truths that required no proof to be accepted, but nevertheless were not incapable of proof... These demonstrations of the axioms depend on the definitions of the mathematical terms, and the underlying epistemology seems to be that a statement whose proof follows immediately (whatever this means) from definitions alone is an axiom, whereas a statement that requires further means in order to be proved (other axioms, constructions, theorems) is a theorem in the proper sense."

A look at Pascal's remarks that Hadamard refers to shows that he works squarely within this conception, see Pascal, Of the Geometrical Spirit. What Hadamard wishes Pascal to realize, apparently, is that once all definitions are dissolved into primitive ideas there is nothing left to give substance to those ideas other than the axioms. And that would reveal the "true meaning" of the axioms, which to Hadamard, naturally, is Hilbert's conception of them as implicit definitions.

However, pace Hadamard, Pascal did juxtapose those two statements, but the result is too alien for Hadamard's ear to register. Likely because he, like many others, views mathematics of the past as a cloudy anticipation of what modern times set straight and right. That there could be forks in the road, with different "right" outcomes that were equally "anticipated", is rarely pondered.

In any case, Pascal's solution is not formal axioms but il lume naturale, the "natural light" that Descartes and other 17th century mathematicians inherited from scholastics:

"For there is one, and it is that of geometry, which is in truth inferior in that it is less convincing, but not in that it is less certain. It does not define every thing and does not prove every thing, and it is in this that it is inferior; but it assumes nothing but things clear and constant by natural enlightenment, and this is why it is perfectly true, nature sustaining it in default of discourse... We see clearly enough from this that there are some words incapable of being defined; and, if nature had not supplied this defect by a corresponding idea which she has given to all mankind, all our expressions would be confused; whilst we use them with the same assurance and the same certainty as though they were explained in a manner perfectly exempt from ambiguities; because nature herself has given us, without words, a clearer knowledge of them than art could acquire by our explanations."

Pascal did not effect the "profound revolution" because there was no need for it at the time. Mathematics was taken for something like physics of the abstract. This conception is limited, and it would not accommodate much of modern mathematics, but it was self-coherent, and Pascal did not fail to connect the dots, which then has to be explained by his focus being elsewhere.

Geometry had to be reconceptualized as a study of plane/space as a whole rather than of diagrams (this was done by Leibniz), and the nascent movement to leave no "immediate" deliverances of the "natural light" unstated had to reach its pinnacle in the work of Pasch and Frege before Hilbert could effect his Copernican turn. Indeed, non-Euclidean geometries were not originally discovered in the formal manner Hadamard envisioned even in the 19th century. Gauss, Helmholtz and later Poincare interpreted them in the spirit of Kant's pure intuition, which replaced the natural light, but with a caveat that said intuition was not precise enough to zero in on a single geometry, the Euclidean one, thus leaving the determination (of curvature) to empirical studies, see Friedman's Einstein, Kant, and the Relativized A Priori.

Not the answer you're looking for? Browse other questions tagged geometry logic or ask your own question.

8
What caused or contributed to Euclid's Elements and Synthetic Geometry falling into disfavor?

3
History of impact of non-Euclidean geometry on math, philosophy, and the public
5
Meaning of a cryptic sentence by Gauss on "the mobility of figures in the hyperbolic plane"