What does "organic" mean in old texts when describing plane curves and their construction?

I've been reading about 17th and 18th century geometers and their research into plane curves, especially algebraic curves. A term that comes up frequently is "organic". By context it seems to pertain to the mechanical construction of curves, such as Newton's "organic" construction of a conic. Some names I see in connection with this are van Schooten, Newton, and MacLaurin.

I cannot find a definition. Apparently it is a term that was widely understood by geometers before 1900, like "species" and "right line", but has become obsolete in modern times.

Newton is thought to have fabricated sophisticated "organic rulers" to support his investigations into curves (see Bloye, The Geometrical Thought of Isaac Newton and Bloye and Huggett, Newton, the Geometer).

I'm used to thinking that these days we are spoiled by being able to draw curves at will with Geogebra, but I suspect that we would be surprised at the forgotten tricks and technology used by the geometers of yore (the best term I can think of for the ancient and pre-1800 geometers) to visualize their subject.

For historical usages of words, the Unabridged Oxford Dictionary is the best resource. Usages from 15th century can also be found. Under the entry "organic", there is a historical usage.

Mathematics. Of the drawing of a curve: performed by means of instruments; mechanical. Chiefly in organic description. Cf. earlier organical adj. 3c. historical. Chiefly with reference to Isaac Newton.

1949 Amer. Math. Monthly 56 46 When only 21 years of age Maclaurin wrote a work called Geometria Organica which was inspired..by the organic description of a conic which we quoted from Newton's Principia.

While in the present day the word "organic" has connotations of "natural" and "holistic", back in Newton's day it was much closer to the Greek word oργανoν (organon: tool, instrument).

For an exploration of organic methods and their place in 17th century geometry I recommend Guicciardini, Isaac Newton on Mathematical Certainty and Method.

Another line of research concerned the so-called organic description (or generation) of curves. This was an important topic, since in order to determine the point of intersection of curves in the construction of geometrical solutions, it was natural to think of the curves as generated by a continuous motion driven by some instrument (an oργανoν). It is the continuity of the motion generating the curves that guarantees a point of intersection can be located exactly. Descartes had devised several mechanisms for generating curves. In De Organica Conicarum Sectionum in Plano Descriptione Tractatus (1646), which Newton read in Exercitationum Mathematicarum (1657), van Schooten had presented several mechanisms for generating conic sections. This research field was connected with practical applications, for instance, lens grinding and sundial design, but it was also sanctioned by classical tradition and motivated the highly abstract needs underlined by Descartes. Newton was able to devise a mechanism for generating conics and to extend it to higher-order curves.

One theme found throughout the book is Newton's criticism of "speculative" methods such as Cartesian analysis, and the definition of conics as planar sections of a cone. Philosophically he much preferred the mechanical (organic).

[...] Newton criticized the lack of elegance and ease in Cartesian analysis of indeterminate problems and believed Cartesian synthesis was based on “spurious” postulates: point-wise constructions, motion of curves, construction with threads, and intersection of cone and plane (barren speculation). He favored expressing the contents of known and unknown segments that have a given ratio to one another, and using projective properties to compose the locus by organic descriptions based on acceptable postulates, namely, rotating rulers. Nevertheless, Newton was a master in Cartesian algebra, the “common analysis of the moderns,” and when he had to deal with a challenging problem, the classification of cubic curves, he made use of algebraic techniques that were at odds with his program of restoration of ancient analysis.

The book describes many organic mechanisms for generating curves. Newton invented a mechanism for determining tangents, and one that could be used to draw the conic defined by five points $A,B,C,D,E$ (pg 94, letter to John Collins, 1672,see below). 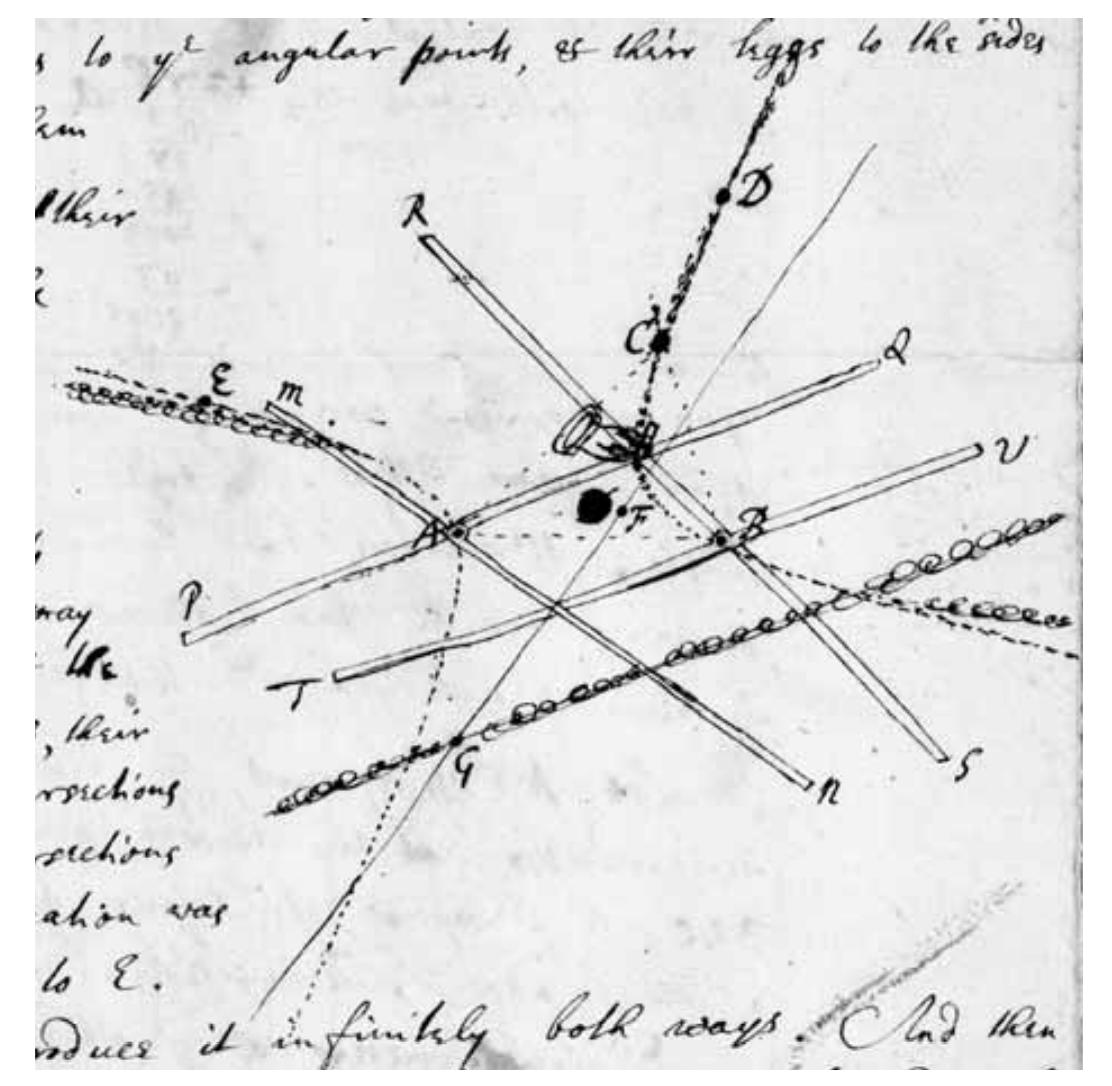 Of interest may be the paper "Newton, the Geometer" (N Bloye and S A Huggett, Newsletter of the European Mathematical Society, number 82, 19-27, December 2011); preprint PDF available here. The authors abstract:

We describe some of Newton’s most profound geometrical discoveries, arguing that by thinking of him as a geometer we gain a deep insight into his peculiar genius. We pay particular attention to Newton’s work on the organic construction, which deserves to be better known, being a classical geometrical construction of the Cremona transformation (1862). Newton was aware of its importance in geometry, using it to generate algebraic curves, including those with singularities.

Not the answer you're looking for? Browse other questions tagged reference-request geometry or ask your own question.

4
What was the old system of using right circular cones to solve problems about circles in the plane?
7
What does "given in species" mean in old geometry textbooks?