Reading Dante's Comedy, I was interested in understand a little bit how medieval geography worked, so I decided to have a look at Edward Luther Stevenson's translation of Ptolemy's Geographia. I've also read the review of this book that Audrey Diller wrote in 1935, so I know it's not precisely the best translation of Ptolemy's work, but it's better than nothing.

In particular, in the XXVII canto of the Paradiso, Dante mentions the first clime, so I was curious to understand what climes exactly were.

Comparing the explanation of parallels used in the delineation of maps and the reproduction of maps that are at the end of the book, which in fact are not the maps of Ptolemy, but the 27 Ptolemaic maps as revised by Donnus Nicolaus Germanus in the XV century (in particular, they are designed using a different projection), I have seen the following:

I've also read that the part of the earth that was considered as inhabited by humans was bounded on the south by a land which was unknown which encompasses some part of Africa and the Indian Ocean (the "Indian sea" at that time). To delineate maps, the southern boundary of the inhabited earth was defined by the parallel that has a latitude of 16° 25' south of the equator. Now, my question is: was this parallel considered the southern limit of the first clime?

At this link you will find the Latin inscription on such parallel on the map of Africa: I can't understand what it says.

I've found this illustration in the book, but I have no idea where it comes from, but I think it's probably from the Renaissance, since the source of Stevenson's work seems to be Renaissance Latin translations of the Geographia: 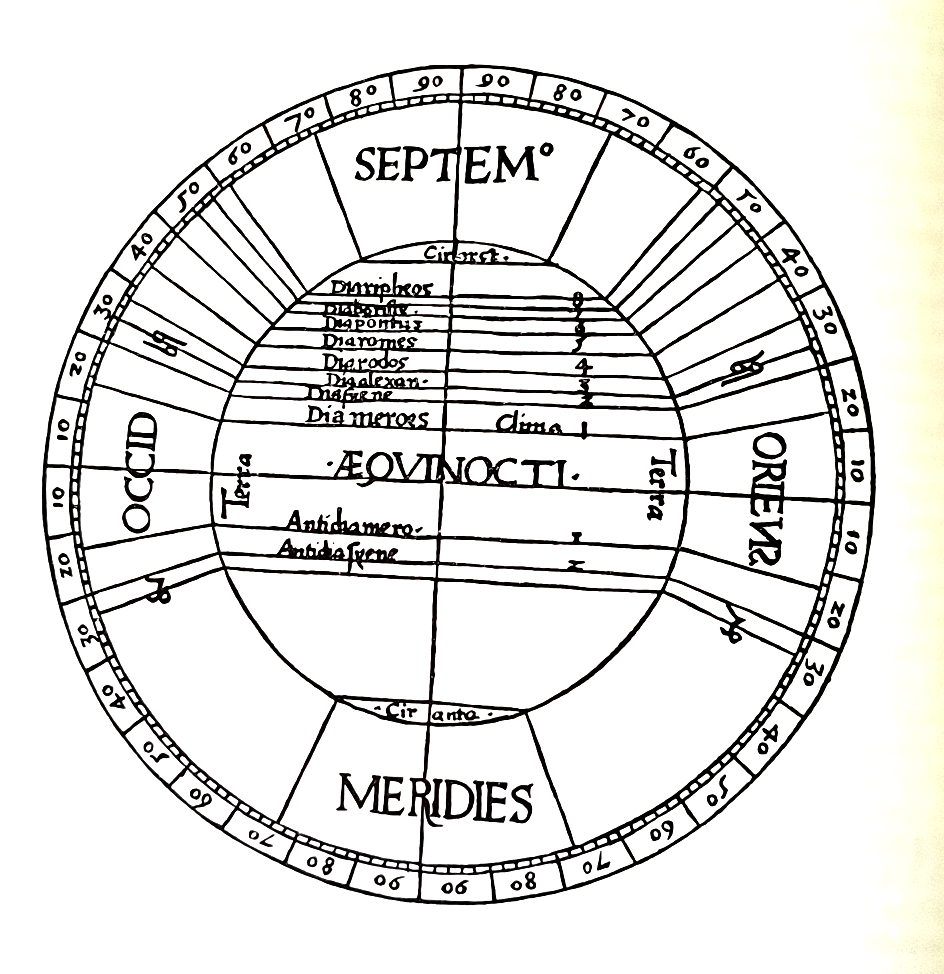 So I now suspect that the southern limit of the first clime was the equator and that the parallel with a latitude of 16° 25' south of the equator was defined at Renaissance (?) as the Antidiameroes, that is, the boundary of some kind of first clime in the southern hemisphere. Is that correct?

Browse other questions tagged middle-ages geography ptolemy antiquity or ask your own question.