Why didn't the phase space formulation of Quantum Mechanics get the upper hand?

At university I learned quantum mechanics in or position or momentum variables. Later (in fact on this site), I learned about the phase space formulation in which both are used at the same time.

The Dutchman Groenewold (hiding from the Nazis in the Dutch polder landscape beneath the sea), Moyal, Wigner, and more contributed. But matrix mechanics and path integrals (both formulated in one of the two variables) got the upper hand.

Now why was that? I had instead learned the combined view (I am doing that right now though; I never went to university anyhow, except the last year in which you could choose nice subjects yourself (I did a course on quantum fields)), but IMO the phase space approach stands much closer to everyday experience (though I'm not sure if a path integral can be defined in both position and momentum at once).

Here are some nice examples of the Wigner quasi-probability functions to be found. They are much closer to macroscopic reality and thus give an easier view, I guess.

This is what they call a "good question", as the expression goes. I and my collaborators had it in the mid 1990s, and about a 3rd of the audience in my colloquia ask it to themselves and me, rarely getting satisfactory answers.

The "gold medal" one, operators in Hilbert space, is what is normally used in atomic, molecular, solid state, and subnuclear physics, by dint of practicality.

The "silver medal" one, functional integrals, languished likewise for two dozen years, until it was used to quantize gauge theories (ghosts), organize their Green's functions, and ultimately have them effectively solved by lattice computer simulations.

But the "bronze medal" one you are asking about has merely helped several researchers, including ourselves, to think more clearly about problems they solved; it cannot be argued, in retrospect, that the solution would have been impractical in Hilbert space or path integrals, only harder. So this formulation, so far, is mostly good for providing intuition on subtle problems, including visualization of the classical limit and killing rampant misconceptions on quantization schemes. Its tasteful math is also useful in Lie Algebras (* product, Moyal Brackets, large N limit), but the mainstream regards such things as mathematical physics diversions.

I know some of the history of the subject; here is our review of it. We conjecture there that, in the late 40s, the formulation was eclipsed by path integrals, as well as the formulation of QED by Feynman (who, like Dirac, was intensely interested in it), and which "stole the show". By looking at the literature over the years, I've confirmed the impression of H Corben (quoted in Moyal's biography by his widow, Ann Moyal, now also deceased) that its misapplication in the quantization problem by wrong-minded adherents of Weyl's paradigmatic quantization dream damaged the formulation significantly. Frustratingly, it took the smoke to clear about 50 years, if that.

A corollary to this is the ignorance of Groenewold's * product and its significance, and Groenewold's epochal thesis/paper at large. Even today, see below, it looks subdominant in citations to Wigner's and Moyal's, even though it is conceptually co-equal, if not over-arching. And to think that Hip worked so hard to have it published in the Physical Review, and failed.

However, let me flesh out your picture by including three citation ("knowledge") graphs versus time, for the three seminal papers of the subject. They all exhibit the same peculiar pattern. I'll use the plots of INSPIRE, which focusses on HEP, but has ready plots, which I (perhaps unjustifiably) don't know how to access in Google Scholar, far more complete. The sampling by INSPIRE, however, follows the time development of the larger GS set. 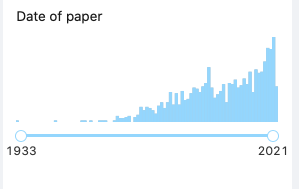 Note the pitiful performance for half a century.

, again bizarrely neglected for half a century. 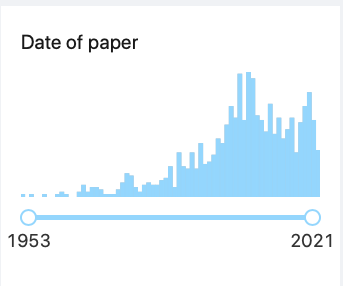 The awareness & appeal of that field only started crawling up in the 1990s, and then got going. I suspect a professional historian of science should have insights on that shift, but my gut feeling is that it's just generational: an entire generation of physicists with the wrong (paradigm) focus ("what is the correct quantization path from classical mechanics?") had to die, before the modern viewpoint ("what more can we learn about QM from this equivalent formulation?") could thrive. Just a thought.

Not the answer you're looking for? Browse other questions tagged physics quantum-mechanics or ask your own question.