When was mercury given its name?

The Wikipedia page for mercury says that it was named after the Roman god because of his speed and mobility. When did the name mercury start to be used to designate the metal?

Mercury was initially known Hydrargyros (in the times of Aristotle) and later known in its liquid state as Argenturn Vivurn translated “alive silver” or in English as “quicksilver" in the 4th century BCE.

The association of traditional metals with the planets dates already back to the 2th century CE (in a passage of Celsus preserved by Origenes [ContraCelsum, VI, 22] mercury gets associated with iron).

Tracking exactly when "mercury" became more popular than its alternative name quicksilver is hard, as one will have to search for meaning. You can look at tables of alchemical symbols where elements are always associated with some astronomical body and quicksilver is represented by ☿ (Mercury). As pointed in the comments, mercury was one of the most important alchemical elements thought to be one of the main ingredients for the philosopher's stone, which allegedly turned normal metals into gold.

The pseudo-Geber in the 13-14th century (sometimes [mis]attributed to Arabic alchemist Jabir ibn Hayyan or Geber from 9th century) in his Summa perfectionis magisterii refers to it as both mercury (Mercurio) and quicksilver (argento uiuo).

This table by Étienne François Geoffroy from 1718 of alchemical elements already uniquely refers to quicksilver as mercure (mercury in French). During the Chemistry Revolution, many chemical names were standardised. In 1787 Méthode de nomenclature chimique, Antoine Lavoisier, et al fixed the name of many elements and they chose to keep only the name mercure for the liquid metal.

Englishman John Dalton, seems to have adopted the French standard. When writing a list of elements in the early 1800, he referred to the liquid metal simply as mercury. Note that in some European languages, that did not catch on (in German is still called Quecksilber).

Some sources: Otto Raubenheimer, History of mercury (1912) and Yannis Almirantis The Paradox of the Planetary Metals (2005).

Mercury the metal (a.k.a quicksilver).

Usage in English ... the Oxford English Dictionary (subscription required) has an example in Chaucer (~1395):

Probably we need to investigate this in other languages; the English usage may come from Latin?

Mercury is not the not only element which is named after the heavenly bodies, we have Uranium, Neptunium, Plutonium, Tellurium (Earth), Selenium (moon). It is not suprising then that ancient and modern chemists were fascinated by the objects in the sky. For a serious historical debate, one should not then focus only one element, we have to look at the whole picture. There are several excellent articles in the Journal of Chemical Education, see, Origin of the Names of Chemical Elements by Vivi Ringnes (Available from Google Scholar).

I show one Table from there. 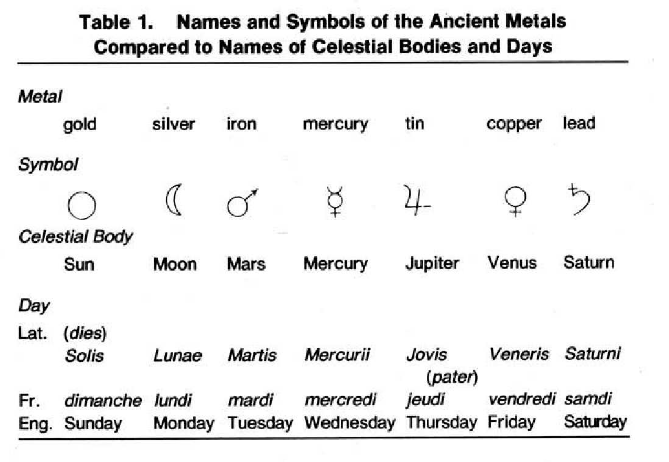 Historically then, mercury is the only element which retained its name, for unknown reasons. One may then ask, why copper is associated with Venus and lead with Saturn. Unfortunately, Wikipedia quality is really bad when it comes to chemical and mathematical history, so don't rely on Wikipedia explanations because it is highly biased by the writer. The problem is that it is open to editing by everyone (which is good and bad both ways). As you can see, Wikipedia's explanation for the name of mercury has no standing whatsoever. It is a conjecture.

Not the answer you're looking for? Browse other questions tagged terminology chemistry or ask your own question.

4
What is the evidence for the existence of Geber?

3
What word meaning "random" was used before the word "random" got popularized?
3
What ever happened to the methylphenidate synthesiser and his family?
4
Grassmann Formula
3
Name of the Gamma function
5
Why are 'speed' and 'velocity' not given the same name?
6
When was the function 1 + cos(x), aka the vercosine, given a name?