Why is price on the vertical axis and quantity on the horizontal axis?

But in economics, this is often (traditionally?) flipped around. As an economist (Greg Mankiw) writes:

given the way we now teach supply and demand, it makes more sense to have price on the horizontal axis. The price is viewed as the variable that determines quantity supplied and quantity demanded, and we usually put the dependent variable (which here is quantity) on the vertical axis.

(To elaborate: Demand is typically taught as a function which takes as input prices and gives as output quantity demanded.)

It seems that it was Alfred Marshall who popularized this convention, though possibly he was merely following Cournot. What precisely is the correct historical account for why price is on the vertical axis and quantity on the horizontal? Why does economics deviate from the rest of science with respect to this particular convention? When did it happen?

We have price on the vertical axis because that's how Alfred Marshall (1890) drew his graphs in Principles of Economics. For better or worse, Principles was hugely influential. And so the present-day convention is Marshall's convention. As Humphrey (1992) writes:

The Marshallian cross diagram bears Marshall's name because he gave it its most complete, systematic, and persuasive statement, not because he was the first to invent it. His account was definitive, not pathbreaking. For this he received — and deserved — credit.

The above answer is not completely satisfactory. It merely pushes the question back one level: Why did Marshall put price on the vertical axis?

Short answer: Marshall first introduced a demand curve in 1879. There, he thought of quantity as the independent variable, with prices adjusting to clear the market. It was thus perfectly logical for him to have quantity on the horizontal axis.

Marshall (1879) was not the first to draw demand or supply curves. According to Humphrey, we have:

Did any of the above influence Marshall?

Moreover, according to the man himself, Marshall's main influence was Cournot:

following the lead of Cournot I had anticipated all the central points of Jevons book and had in many respects gone beyond him,

my obligations are solely to Cournot; not to Fleeming Jenkin or Dupuit. (Quoted in Whitaker.)

But Cournot had price on the horizontal axis! I can find in Marshall's writings no explicit explanation for why he chose to deviate from Cournot, who was his greatest influence (at least in this matter).

However, when introducing for his very first demand curve (1879), he does write the following:

we may draw what may be called "the Demand curve," thus: Let $M$ be any point on $Ox$ (fig. 20), and let the price at which it is possible to dispose of $OM_1$ coals annually be estimated and found to be equal to $ON_1$. 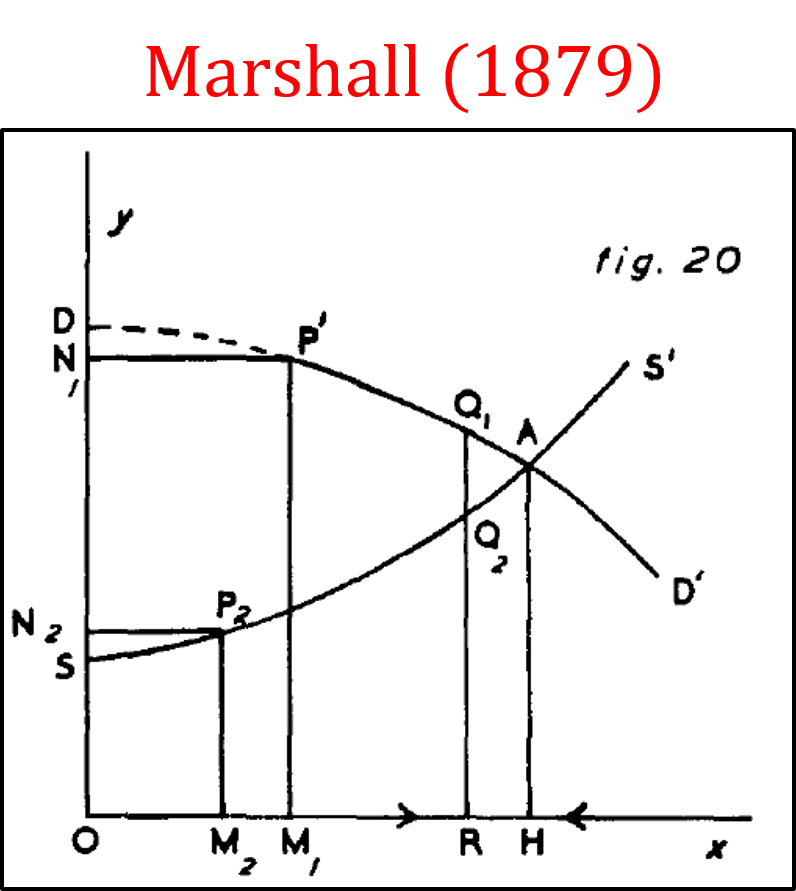 I thus conclude that Marshall thought of quantity as the independent variable, with prices adjusting to clear the market. It was thus perfectly sensible for him to put quantity on the horizontal axis and price on the vertical.

This way of thinking seems slightly unnatural to me (and many others). But perhaps this is only because we've been trained, since our first economics classes, to think of price as the independent variable.

Moreover, as some here have pointed out, it's not really all that absurd to think of quantity as the independent variable, as Marshall did.

P.S. There's also another cynical explanation I once came across: Marshall simply wanted to differentiate himself from Cournot et al. So he deliberately switched the axes. In my opinion this can plausibly serve as part of the explanation. After all, Marshall felt that he had done a lot of his own original work and was somewhat peeved that others, such as Jenkin, had anticipated his work (see e.g. Marshall's reaction to Jenkin's 1870 article, quoted in Whitaker, 1975).

Supply and Demand Diagrams before Marshall (1879) 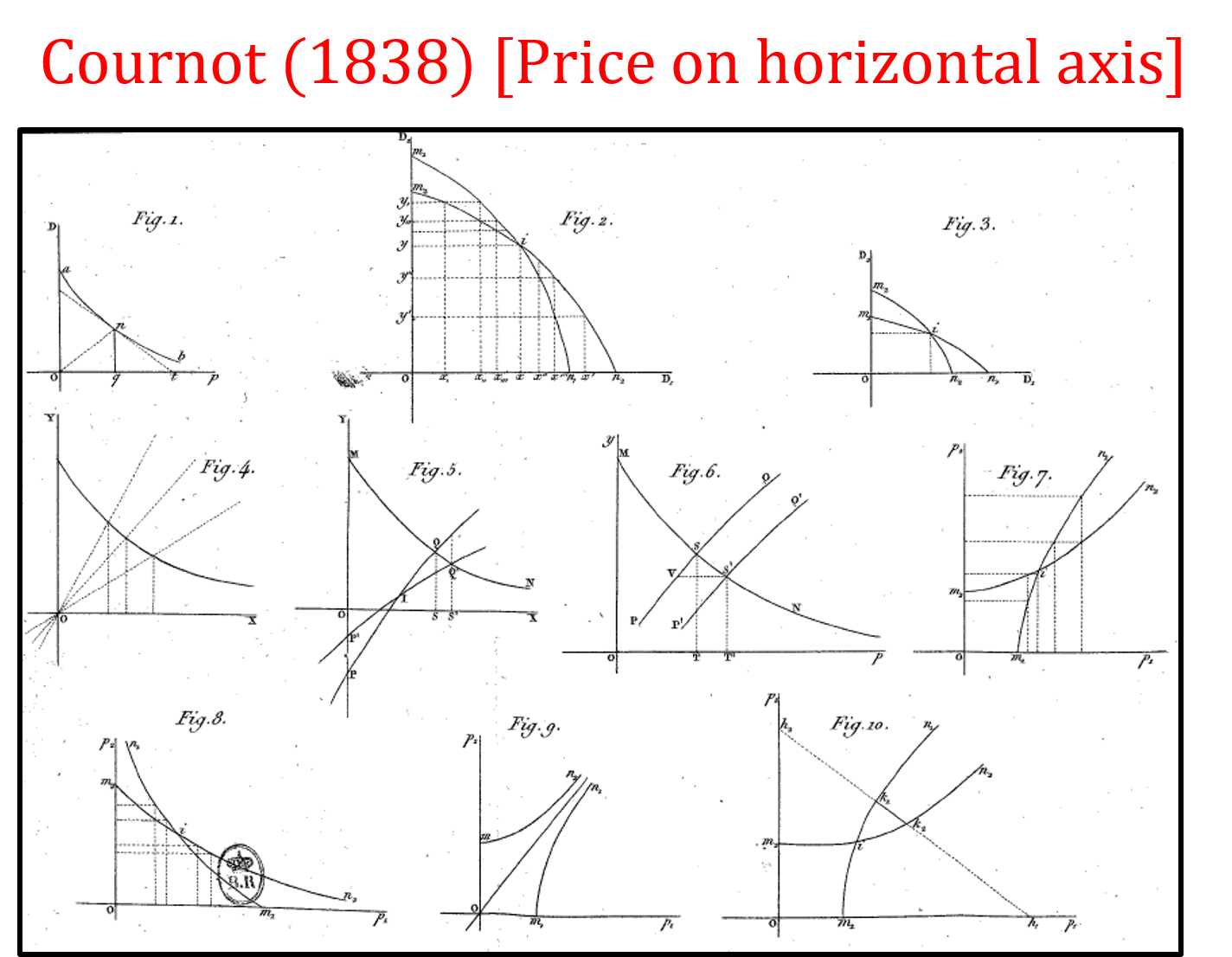 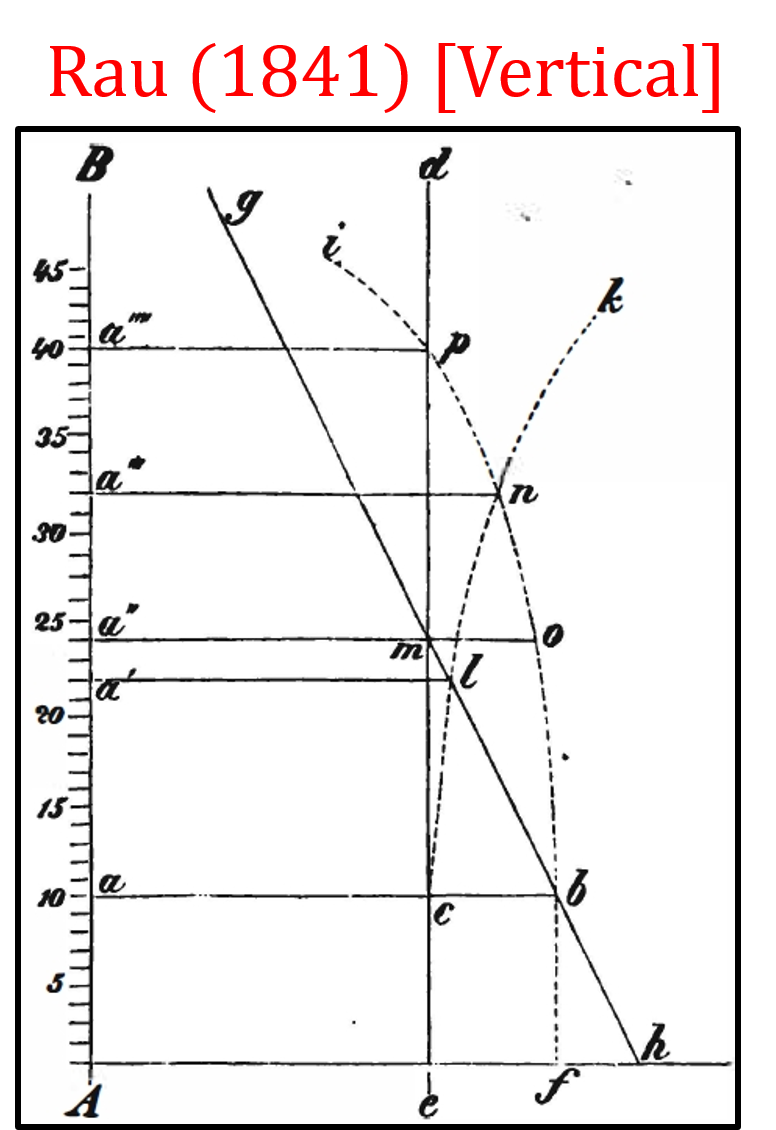 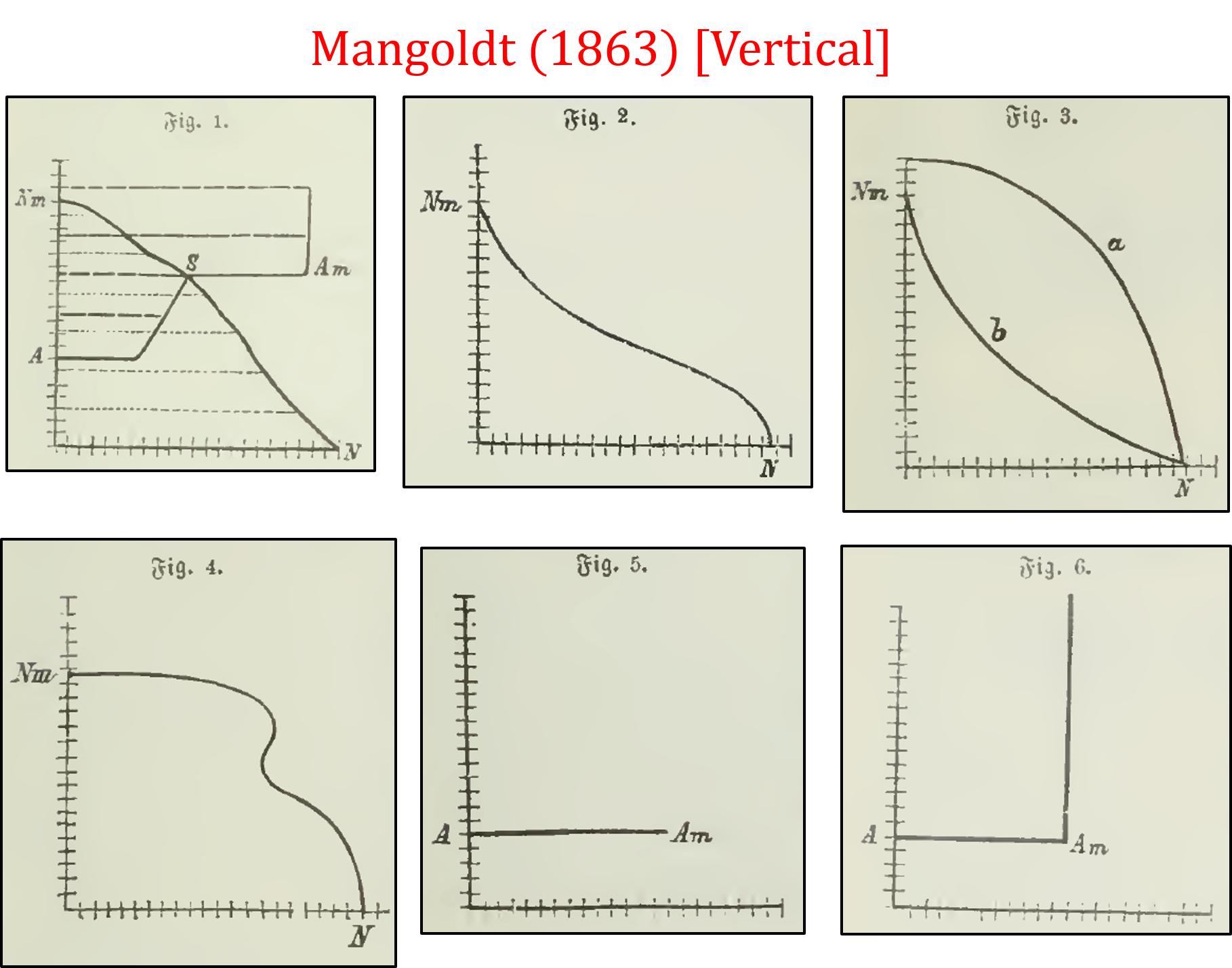 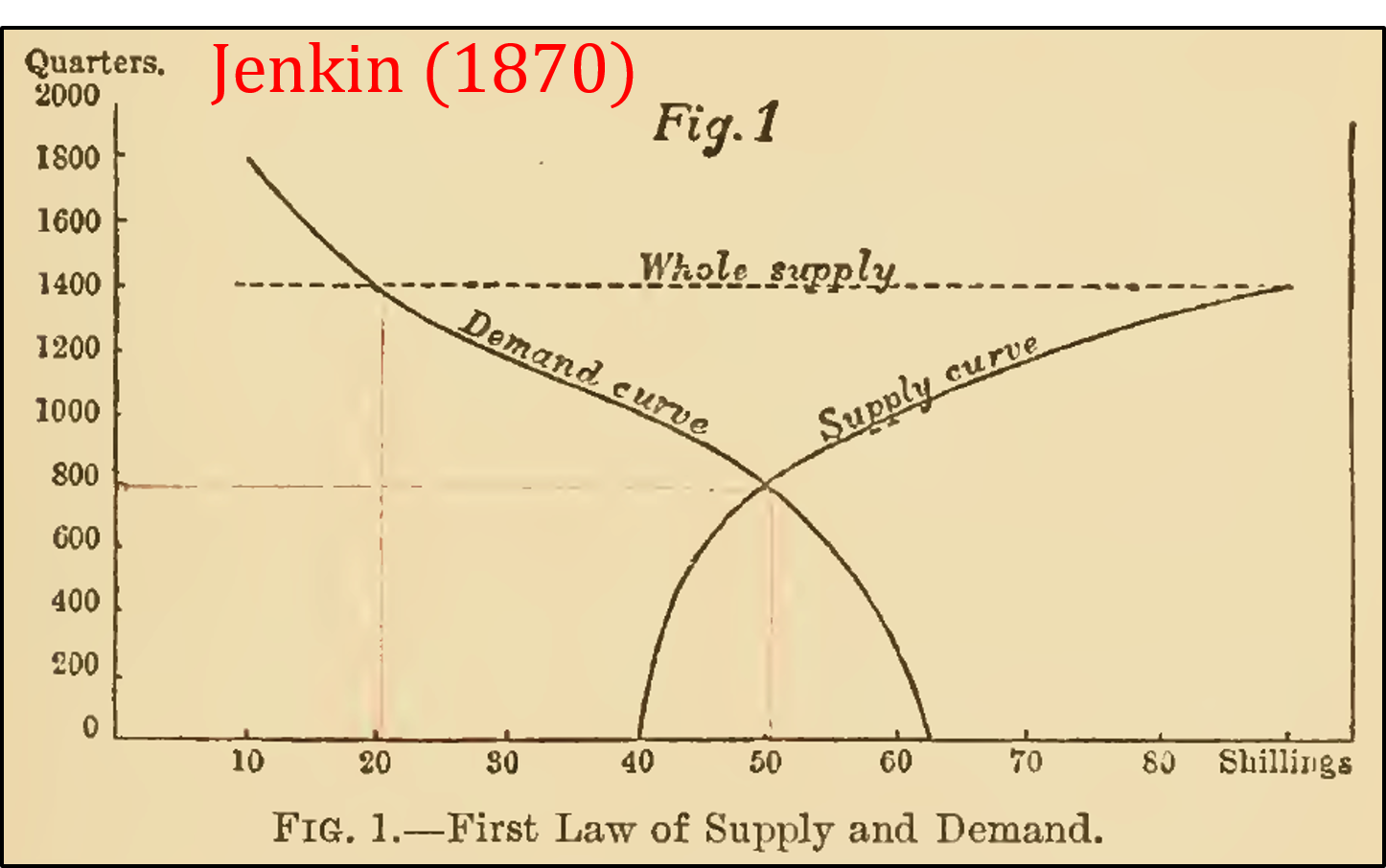 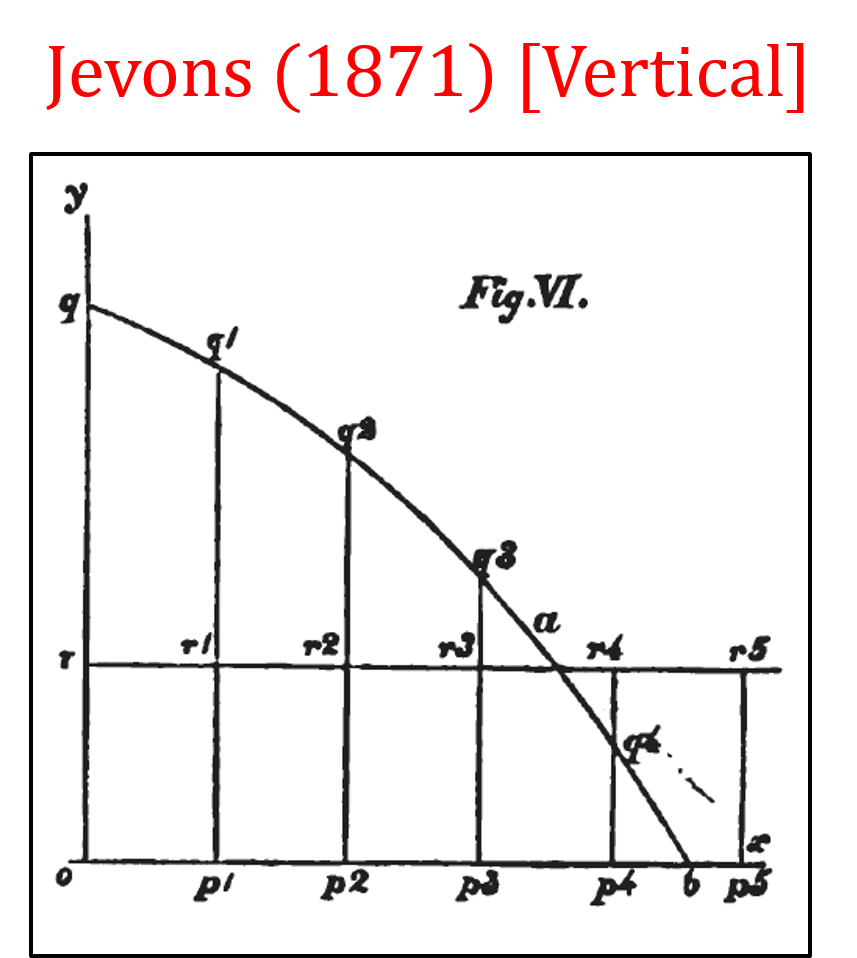 To your three points

This is is basically a demand curve but its geared toward predicting rates rather than reporting rates at different investments.

As you said this is also a demand curve.

Note, in my explanations I always said demand to keep it clean. You could switch it to Supply and it still makes sense (unless i made a mistake.)

This question cropped up on Economics.SE, where I posted this answer:

This objection never made too much sense to me. In the standard model of perfect competition, firms take the price as given and respond by choosing their quantity. So you have a model in which a bunch of actors choose quantity and the market price emerges as a consequence of all of those decisions. This makes it sound awfully like price is the "dependent" variable, which by convention is always placed on the vertical access.

Indeed, this seems to be how Alfred Marshall (who originated the modern form of the Demand-Supply diagram) thought about things. Here's a quote from An Introduction to Postitive Economics, Seventh ed. by Richard G. Lipsey (as quoted here):

29
Why is American and French notation different for open intervals (x, y) vs. ]x, y[?

8
When was the short notation for large numbers first introduced and why?
9
Why was delta ($\Delta$) chosen to represent change of a quantity?
1
Why was the reduced Planck constant introduced and when?
0
Why do undergraduate texts insist on graphing price as a function of demand?
8
Who invented the divisibility symbol and why is it backwards?
2
Why $x_a$ (or $x_o$) and not $a_x$? (conventions for algebraic quantities)
11
When and why did $\frac{dy}{dx}$ become $\frac{d}{dx}y$?
52
Why are X and Y commonly used as mathematical placeholders?
9
Why do I , J and K in mechanics represent X , Y and Z in maths?