Why was Hausdorff not able to move to United States from Nazi Germany?

Felix Hausdorff, who was so well known to American mathematicians through his topology book of 1914, Grundzüge der Mengenlehre, committed suicide together with his wife when facing the threat of deportation to Nazi Concentration camps in 1942.

Based on Wikipedia，Hausdorff hated Nazi as early as early 1930s and asked the mathematician Richard Courant in 1939 for a research fellowship to be able to emigrate into the USA. Does anyone know how Courant replied to Hausdorff and why Hausdorff wasn't able to move to United State? Was it because Nazi deterred him or US didn't give him visa?

mathematicians nazi-germany
Share
Improve this question
edited Jan 12 at 15:46
No One
asked Jan 10 at 0:45

According to the the book

specifically 11. Dismissals and Exile, Courant wrote recommendation letters for Hausdorff to several US universities. A copy of the correspondence is below. To quote from the book:

Due to his age Hausdorff, one of the most renowned mathematicians in Germany, failed in his attempts to emigrate after the “Reichskristallnacht” of 1938. Courant and others tried to help, but without success. No university in the USA was willing to offer him a position or fellowship. He remained in Nazi Germany, losing all hope of leaving the country. 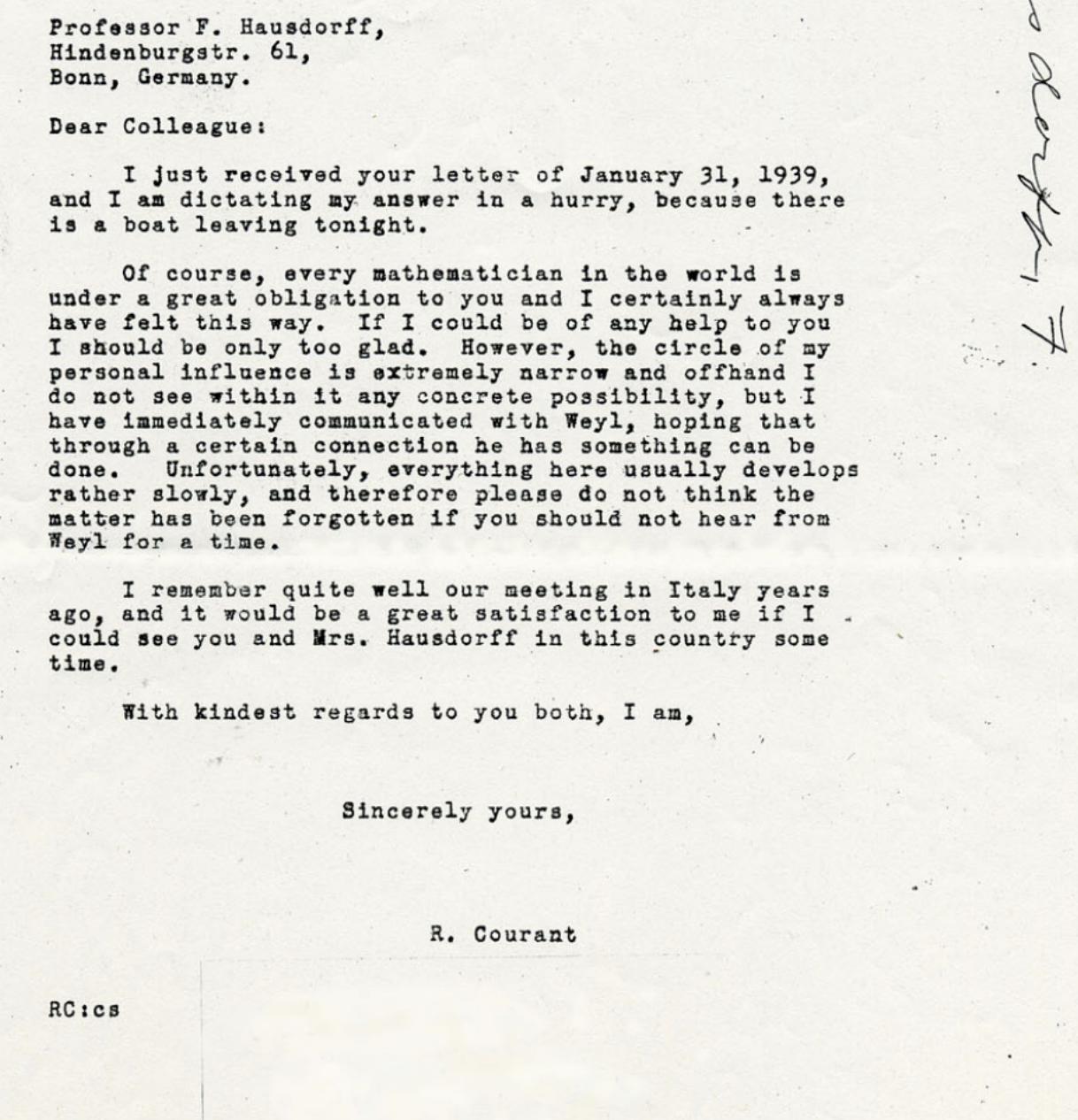 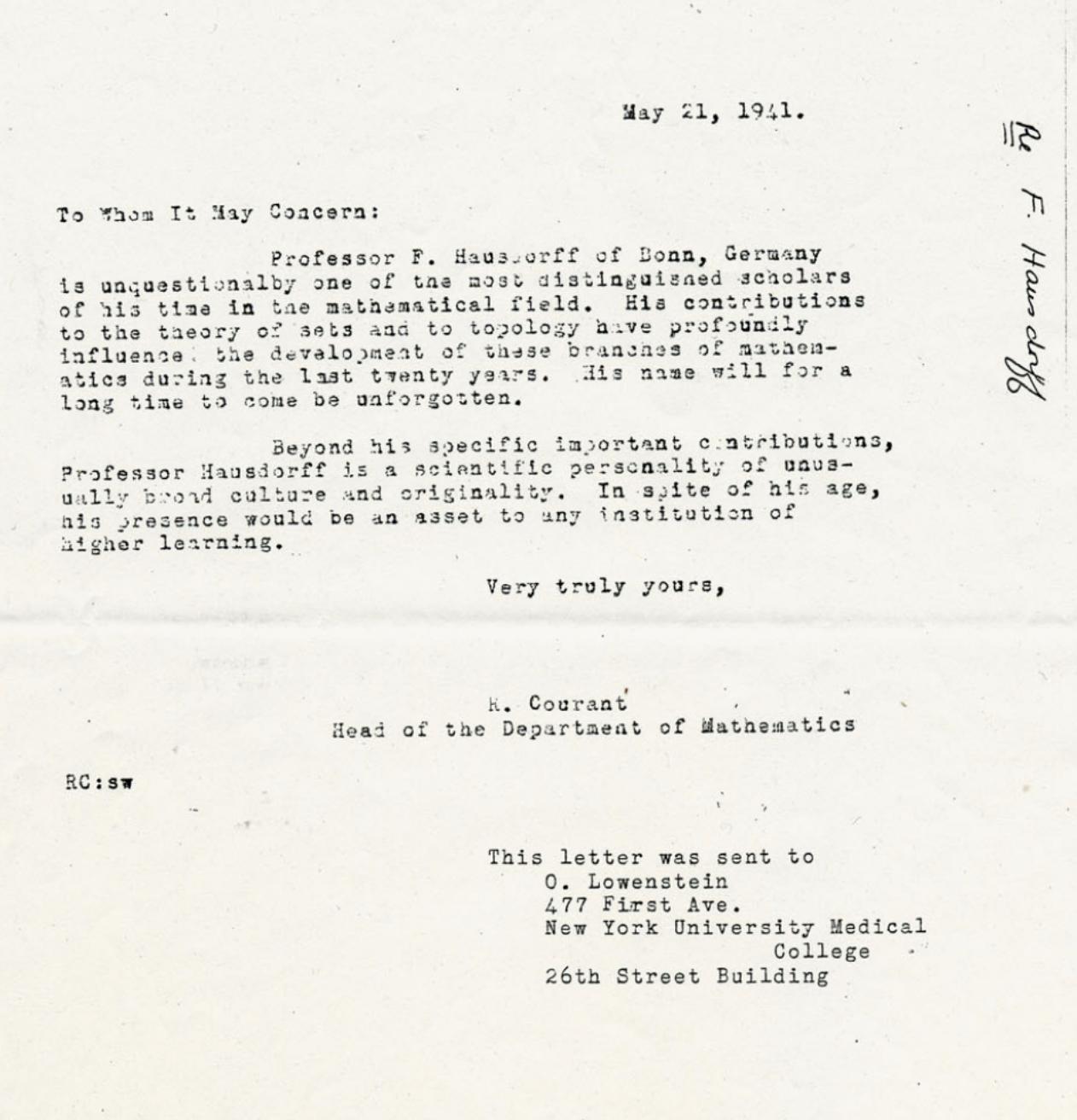 In the period leading to the 2nd World War, the number of US visas issues to people from German-speaking countries was very limited. Below is the quote from the webpage of the US Holocaust Museum here, specifically dealing with the question "What did Refugees Need to Obtain a US Visa in the 1930s?"

As the Nazi regime’s attacks intensified in the late 1930s, hundreds of thousands of Jews in Germany tried to immigrate to the United States. To enter the United States, each person needed an immigration visa stamped into his or her passport.

It was difficult to get the necessary papers to leave Germany, and US immigration visas were difficult to obtain. The process could take years.

By 1938, you could expect to wait for at least two years for a visa.

Immigrating to the United States was a complicated, expensive process even under the best of circumstances. Hundreds of thousands of people, most of them Jewish refugees, applied at American consulates in Europe but were unable to immigrate. Many of them became trapped in Nazi-occupied territory and were murdered in the Holocaust.

After Germany annexed Austria in March 1938, President Franklin Roosevelt combined the German and Austrian quotas, making 27,370 visas available each year for people born in these countries, who were now all considered "German." As antisemitic persecution increased and Germany began to expand its territorial holdings in Europe, the waiting list grew.

With Europe at war, the State Department implemented new restrictions designed both to protect the nation’s security and further limit immigration. In July 1941, Nazi Germany ordered US consulates in Nazi-occupied territory to close, trapping potential immigrants. Only German refugees who had already escaped Nazi territory could obtain US immigration visas.

You can find more information by visiting that web-page.

Not the answer you're looking for? Browse other questions tagged mathematicians nazi-germany or ask your own question.