How to give a meaningful interpretation to Gauss's notion of "oriented area" of self-intersecting geodesic polygons?

Gauss's notion of "oriented area" of figures characterizes the notion of two-dimensional content in a way that enables self-intersecting geodesic polygons (the term "geodesic" means that the polygon sides are geodesic lines of curved surface) to be regarded as zero area polygons, despite that these polygons obviously have content. According to this post, an algebraic way to see it in the case of euclidean geometry is through the so-called Shoelace formula (also discovered by Gauss, in his youth years). Another way is through considering the orientation of each sub-loop (clockwise or counterclockwise) before summing the signed area of them (and this gives the oriented area of figures). 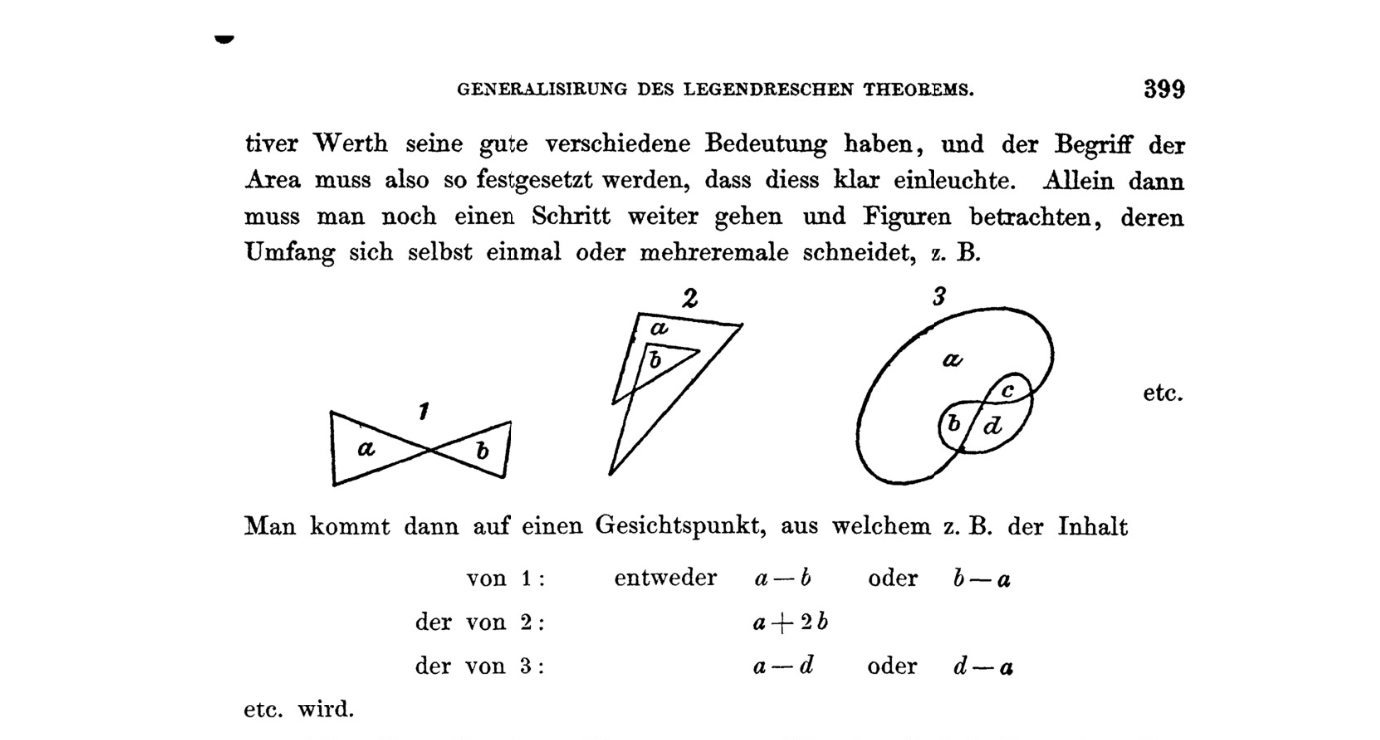 For example, in the image above, taken from his letter to olbers from 1825 (Gauss's werke, volume 8, p.398-400), Gauss gives the oriented areas of the three figures shown there.

I was wondering how to give a meaningful interpretation of self-intersecting polygons with zero area, both in order to understand this notion for myself and in order to gain insight about how Gauss originated this notion. One interpretation I thought about, which works only for surfaces of constant curvature, involves the parallel transport of vectors along geodesic polygons. In a surface of constant curvature, the angular deviation of a vector transported along a closed loop from its intial direction is proportional to the area of the loop. Therefore, if one takes into account the direction of rotation of the transported vector (whetever it is transported clockwise or counterclockwise along each subloop), one gets that the angular deviation of the transported vector is equal to the oriented area of the spherical image of the geodesic polygon.

For example, in the image below, a tangent vector is transported clockwise along a spherical traingle, and this results in angular deviation $\alpha$ (proportional to the area of that triangle). If we would transport the vector counterclockwise, the angular deviation would be $-\alpha$. This means that if we concatenate a second triangle with equal area through one of the vertexes of the first triangle, we would get a kind of "8 figure" and the parallel transport would result in zero angular deviation. Note that this interpretation works only for surfaces of constant curvature - if the surface has varing curvature than each infinitesimal loop has to be weighted by its own Gaussian curvature. 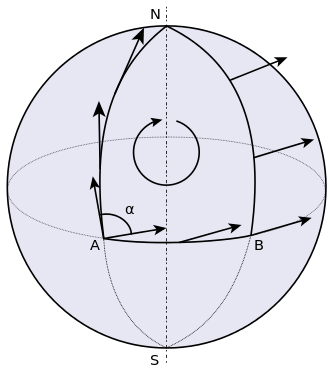 So I want to ask how mathematicians (Gauss and those influenced by him) originally conceived of this notion? and is there another interpretation of "oriented area", not using the modern concept of parallel transport? I'm just trying to explain to myself how a (self-intersecting) polygon can have zero area.

Browse other questions tagged geometry gauss differential-geometry or ask your own question.