Who named the fugacity, who coined the variable name and did it already relate to complex analysis?

In Riemanns monumental paper, he expresses a prime counting function as an inverse Mellin transform of the log of the function he analytically continued into the complex plane

and the zeros of $\zeta$ are consequently of interest (Riemann hypothesis).

The zeros of $\mathcal{Z}$ in $z$ make the log $\ln \mathcal{Z}$ explode and this phenomenon is associated with phase transitions and people study and cook up result like the Lee-Yang-theorem. The fugacity as a parameter in $\mathbb C$, which controls the zeros, is actually on the cover of one of my favorite books. But I'd think the fugacity was defined without that context in mind.

What I wanted to know is when did "$z$" become a standard name for a //complex// variable and, more importantly, is it coincidence that the names fit?? Who names it and where there other names for the fugaciy? 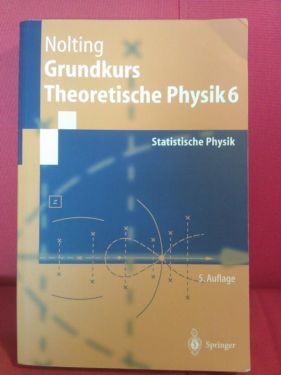 Yes, it is a coincidence.

The concept of fugacity (from the Latin for "fleetness, tendency to flee") was originally introduced by Gilbert Lewis in his 1901 paper "The Law of Physico-Chemical Change" for the pressure of an ideal gas which has the same chemical potential as a real gas. Lewis notated this with ψ, though these days the letter f is used.

The concept of complex fugacity was introduced by Lee and Lang in their 1952 paper "Statistical Theory of Equations of State and Phase Transitions". The complex fugacity plane was originally notated y, though as you note these days the letter z is used. I'm not sure precisely how old the use of z for a generic complex variable is but it dates to at least the 1890s (e.g. see here).

The concept of partition function was introduced by Planck in 1921. Its use of the letter Z comes from its original German name, Zustandssumme ("sum over states"). The English name is due to Darwin and Fowler (1922).

Not the answer you're looking for? Browse other questions tagged theoretical-physics number-theory statistical-mechanics mathematical-physics complex-analysis or ask your own question.

7
How did the 'Poincaré patches' get their name?
7
Were matrix theory and functional analysis well-known to physicists before the invention of matrix mechanics?
4
Did Gauss know the residues theorem in complex analysis in 1811?
7
What is the name of this numeral system?
9
When did the name “Boltzmann constant” prevail, and how?
4
Did Maxwell discover the distribution of velocities in a gas during an exam set by Stokes?
2
Did Euler or did D'Alembert incorporate initial conditions into the solution to the 1D wave equation?
2
Pythagorean and the number 17