If you want someone to blame blame John Herschel, son of the famous astronomer William Herschel. The father in 1781 gave us the planet Uranus, the son in 1813 gave us the dubious symbol $\sin^{-1}(x)$ for the inverse sine. As precedent, he cited the 'operator powers' notation, like ${d^n}f$ from calculus, so according to Herschel we should write $d^{-1}f$ for $\int f$. "The symmetry of this notation, and above all the new and most extensive views it opens seem to authorize its universal adoption", he wrote. Herschel was aware of the potential confusion with arithmetical reciprocals, but apparently thought that the benefits outweighed the downsides.

First notation for the inverse sine was proposed by Daniel Bernoulli in 1729, it was $AS$, Euler shortened it to $A$ alone. Lagrange was first to introduce $\operatorname{arc}.\!\sin$, and with the dot eventually removed it became the standard in the continental Europe. And US and Britain would have followed suit too... if it wasn't for Herschel Jr.! When he published Traite de la Luminere in French in 1829 he himself used Lagrange's $arc.sin$. Perhaps it was a leftover of the Newton-Leibniz priority dispute and/or cultural rivalry between Britain and the continent, but British often insisted on being notationally different, feet and pounds are another example, as are the long division symbol, $\tan$ vs $\text{tg}$ for tangent, and $\sinh$ vs $\text{sh}$ for hyperbolic sine.

From Herschel's 'On a Remarkable Application of Cotes's Theorem', Philosophical Transactions, 1813: 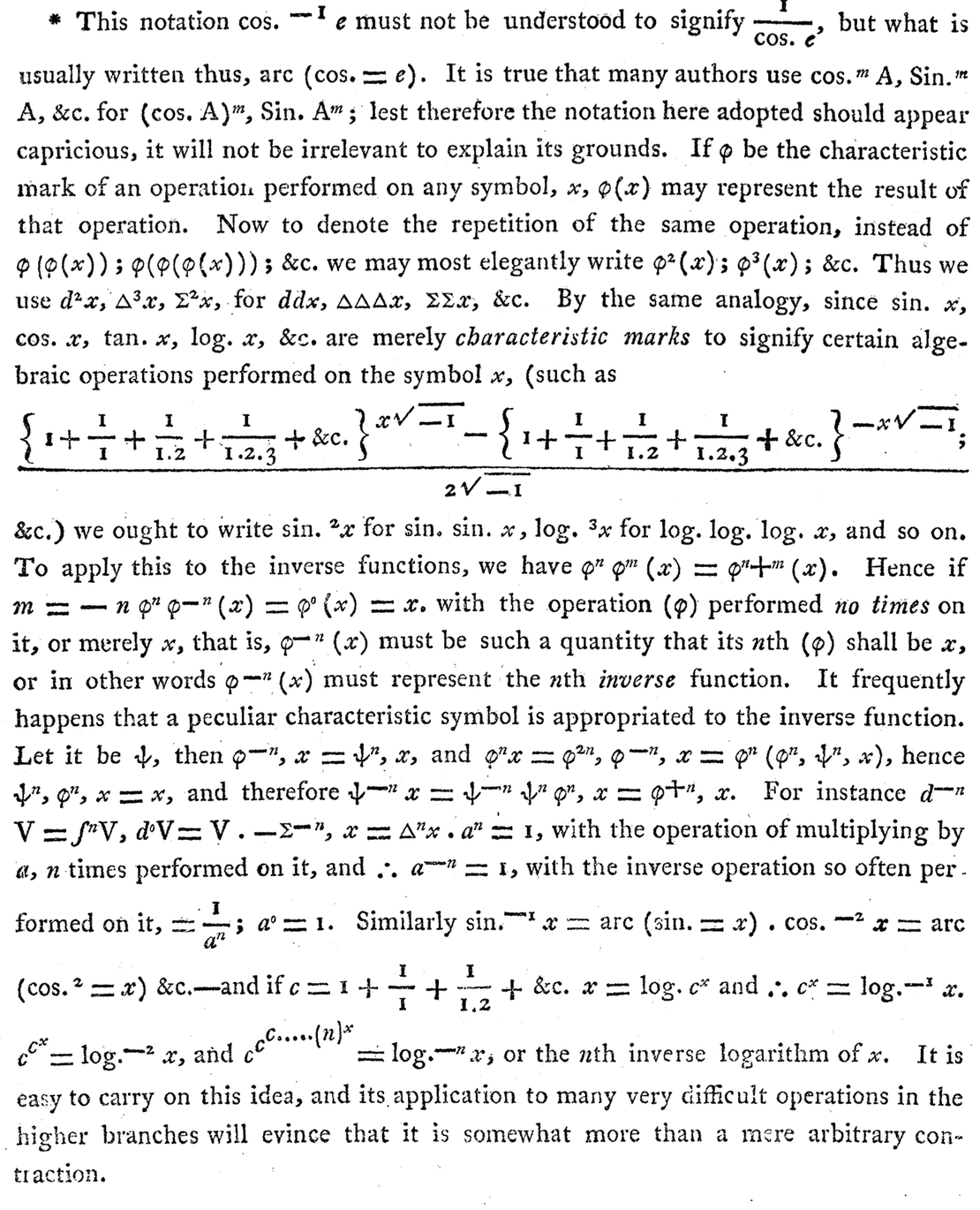 Gauss wrote a review of this article in the Göttingsche Gelehrte Anzeigen (reprinted in Werke, vol. 4, p. 361): 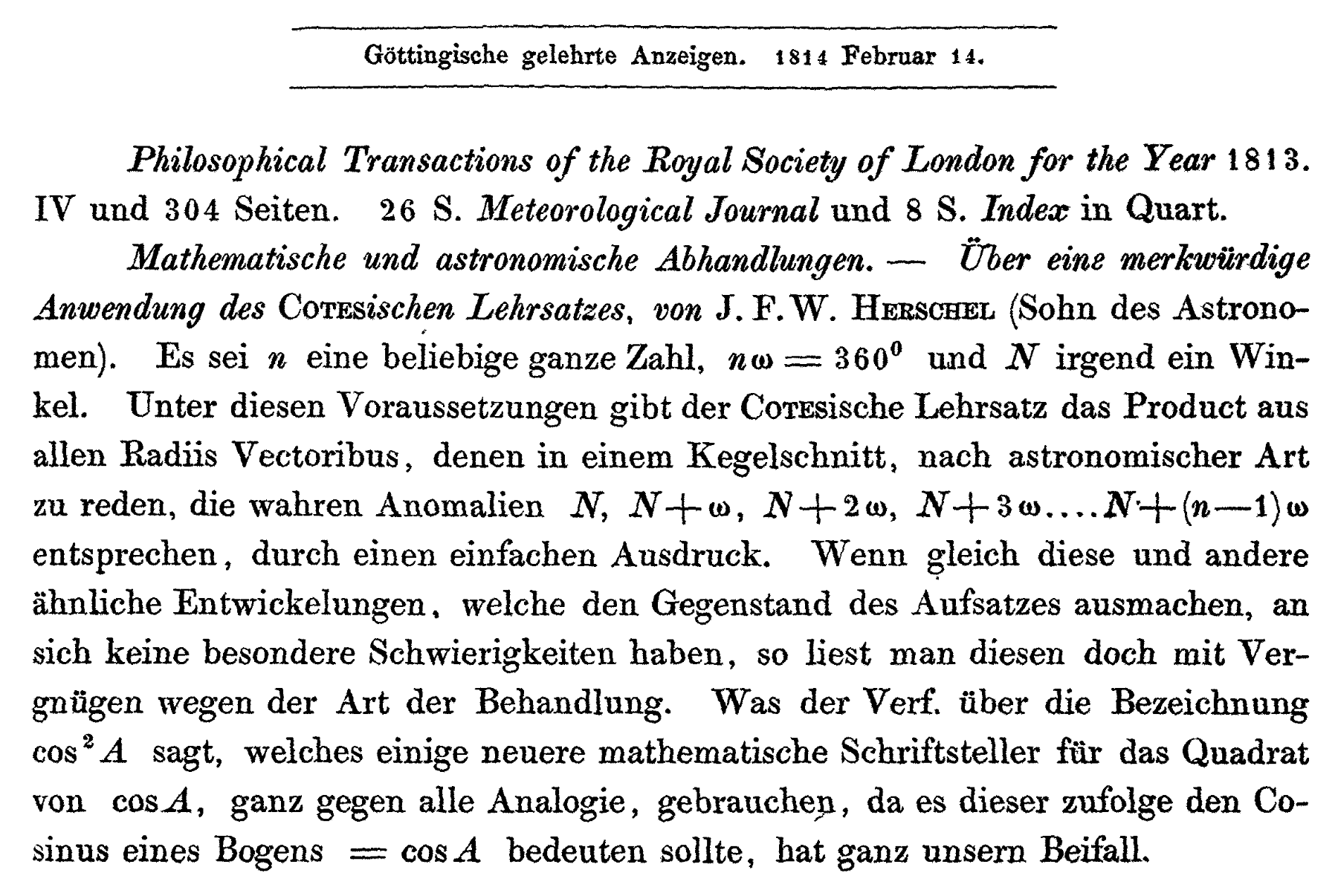 I will translate the last sentence:

What the author says about the notation $\cos^2 A$, which some newer mathematical writers use for the square of $\cos A$, totally against all analogy, as accordingly this should mean the cosine of an angle $= \cos A$, has our total approbation.

Florian Cajori has it in A History of Mathematical Notations Vol. II Paragraph 533 that "John Herschel's notation for inverse functions $\sin^{-1}x$,... etc., was published by him in the Philosophical Transactions of London, for the year 1813." Cajori goes on to indicate that Hershel gave specific instructions to not confuse the notation with the multiplicative inverse.

His justification for the notation, revolves around a "symmetry" with other notations like, for example, writing $\Delta\Delta\Delta x$ as $\Delta^3x$, and he lists several others. I refer you to the literature for the full description.

Now in the same, Cajori notes that "Some years later, Hershel explained that in 1813 he used ...[these notations]... as he then supposed for the first time. The work of a German analyst, Burmann, has however, within these few months come to his knowledge, in which the same is explained at a considerably earlier date."

There is much more detail in this reference, in particular explaining the logic of the notation.

Notations of this kind are determined by high school textbooks. I noticed that $\sin^{-1}$ is common in the English-speaking countries, while in many European countries they prefer $\arcsin$. This is consistent with the remark in the end of Conifold's answer about nationalistic reasons for this difference.

I was educated in Ukraine (then a part of the former Soviet Union) and I have never seen $\sin^{-1}$ before I came to the US.

The inconsistency of Herschel's mis-design is also acknowledged by this Wikipedia article.

Further it would be confusing to write $sin(x)^{n}$, in particular $sinx^{n}$ if the parentheses are not written as is often done.

Not the answer you're looking for? Browse other questions tagged mathematics notation or ask your own question.

12
Who invented short and long division?

9
Why is the natural logarithm represented by $\ln$?
0
Abbreviated Notation for Groups, Rings and Fields
8
Euler's first proof of $e^{ix}=\cos(x)+i\sin(x)$
8
History of the definition of Injective & Surjective Function
9
Who introduced the notation $y|_{x=a}$?
10
When was the function arrow notation $x \mapsto y$ first used?
6
When was the function 1 + cos(x), aka the vercosine, given a name?
1
Why do we still use degrees and cycles if we all implicitly use radians in trigonometric functions?