Has a digit ever been used to represent the number "10"?

Ten is special to humans, as there are 10 fingers on two hands, and fingers are still the basic counting medium for people.

So, was there any digit representing the number "10" in a positional system historically used by any civilizations?

We could have taken A as a digit to represent number 10, and thus the numbers would have been:

Obviously, there would have been new methods of calculation.

Why was 10 not given its own digit, and instead was represented by using other digits?

Yes, it has been:

, the depression made by the tip of a Babylonian wedge shaped stylus on a clay tablet. When a circular stylus was used (rarely) the symbol was just $\bigcirc$. The earliest positional system was sexagesimal, with base 60, so it had cuneiform symbols for all digits from 1 to 59. Babylonians used it since before 2000 BC for commercial bookkeeping, etc. The absence of zero caused ambiguities, e.g. 1 and 60 had the same symbol. In the medial positions, however, zero was represented by a blank and later by a placeholder symbol

. Greek astronomers replaced it with $o$ in the second century BC, that could be used at the end of a number also, removing the ambiguities. They also used their letter $\iota$ for 10 instead of Babylonian cuneiform, even though it was the 9th letter of their alphabet (archaic letter $\digamma$ was used for 6).

So the use of zero as a placeholder much predates its use as a number, and Indians learned about it from Ptolemy's Almagest, if not earlier. Therefore, they would have needed no separate symbol for 10 when they switched to decimal notation. But in any case, zero is already used in 3rd century AD even as a number, while the decimal notation first appears much later, around 458 AD, so the problem never arose.

But 10 was not special among sexagesimal digits, so perhaps more in the spirit of the question is the symbol $\big|$ used in Chinese proto-decimal system before 4th century BC. That system had hieroglyphs for digits from 1 to 9, and for the powers of 10. Although digits were written in order we write them today to form a number, the symbol for a power of ten was placed above or below each, so its value wasn't indicated by position alone. This allowed for non-ambiguous representation without even placeholder 0, and the number could still be recovered if the digits got scrambled.

By the way, hexadecimal system was also used in China, mostly for calculations with weights. This was done on abacus (counting board) starting around 190 AD, and since abacus is not paper what represented 10 was not a symbol, but an arrangement of beads.

It was already mentioned that the Mesopotamian (hexagezimal system) used a special symbol for our "10". Also, In the modern hexadecimal system we have A for "10". The Roman and the Greek specialties were also mentioned.

To add something to the already existing posts I copy here a paragraph from my own lecture notes about numbers systems: 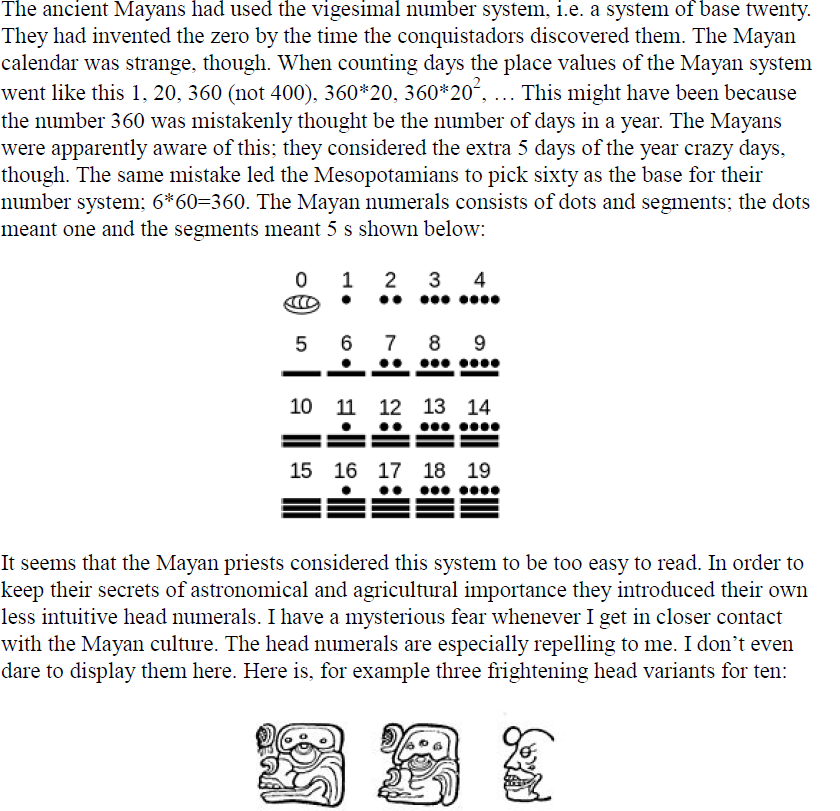 Base "eleven" could have been the most natural number system... To support this idea I copy here another paragraph from the same lecture notes: 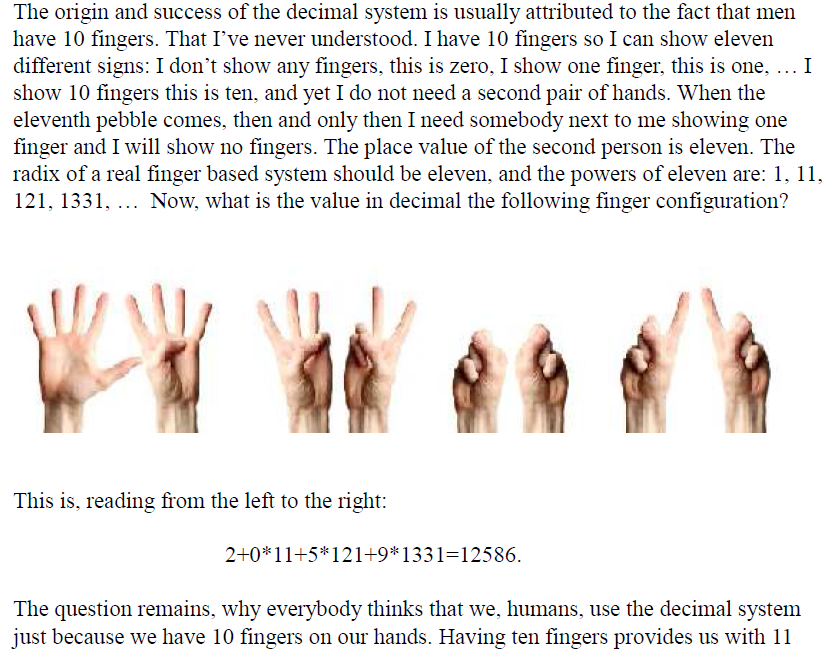 symbols. That is, the number system of base eleven would have been the most natural one.

Taking into account our toes the number system of base 21 seems to be even more natural, uncomfortable though...

Maybe you don't consider that a "digit", but we'll necessarily have to broaden the definition of "digit" to include anything that's not 0-9.

Mauro has already mentioned the Roman numerals. The Greeks of the classical period used the letters of the alphabet to represent numbers. The first nine letters (A to Θ) stand for the units from 1 to 9, the next nine letters (I to Ϙ) stand for the multiples of ten (10, 20, 30…), the next nine (from P to ϡ) are the hundreds (100, 200…). You can write (for example) 111 as PIA. If these are not digits, then I do not know what a digit is.

In the Hellenistic period the Jews and Arabs and others adopted this system, using the letters of the Hebrew and Arabic alphabets to represent numbers in exactly the same way. This continues throughout the Middle Ages.

then seventh number (equivalent to "10" in deimal arithmetic) will be "AX".

This answers why "ten" is represented just by two digits "1" and "0". in a given order?

Chek that any other representation say "8""9" will collapse whole arithmetic!

See Forslund, Robert R., "A logical alternative to the existing positional number system." (here) He uses 1 to b (the base) instead of 0 to (b-1). For digits, he chooses "A".

Not the answer you're looking for? Browse other questions tagged mathematics notation computation or ask your own question.

4
What are the precursors and postcursors to discovery/invention of zero?
6
What is the most ancient civilization that used base-16 (hexadecimal) number system?
6
Was the concept of zero ever developed without relation to positional number systems?

15
Have numbering systems other than base ten ever been used or popular?
34
What is so mysterious about Archimedes' approximation of $\sqrt 3$?
11
Did anybody know Pi well enough in 1592 to celebrate Pi day?
1
Who was the first to show that this quintic equation has five radical roots?
3
How did egyptian mathematical fractions evolve in antiquity?
8
Has Chinese Remainder Theorem ever been used by Chinese military?
5
Did Eudoxus really set out to present irrationals as Dedekind cuts?
4
Has any large group of people used a base other than 10, 20 and 60 for ordinary purposes?
2
Differences between modern and old mathematical notations