Why was the Tertiary period dropped but the Quaternary retained?

The terms Primary, Secondary, Tertiary, and Quaternary were coined by early geologists as they tried to make sense of the rocks around them. As they began to understand what was going on, they found "Primary" and "Secondary" were unhelpful terms, but "Tertiary" and "Quaternary" were more useful and evolved into terms for geological periods within the Cenozoic.

The International Commission on Stratigraphy has chosen to drop "Tertiary" and replace it with the Paleogene & Neogene; but keep the Quaternary. Why?

From a terrestrial point of view, I can see the value of the Quaternary - it represents a period of polar ice caps and clear climate variations according to Milankovitch cycles. But why was the Tertiary considered less useful? What was Paleogene&Neogene considered more meaningful as a complete replacement for the Tertiary (rather than in addition to)?

What happened is that Tertiary/Quaternary were dropped first, together, by the International Commission on Stratigraphy (ICS) formally in 2004 (see Gradstein et al. 2004a for instance, along with the 2004 edition of "A geological timescale", Gradstein et al 2004b) but then Quaternary was reinstated as a formal Period in 2009.

Geowhen database has a nice page on the pre-2009 story (I'm not sure this database has been updated since, unfortunately). To summarize what they say: Giovanni Arduino (1759) separated geologic time in Primary/Secondary/Tertiary; in 1829, Jules Desnoyers added the term Quaternary; the term has been used since then to describe the recent period of glacial/interglacial cycles. But since then, the concepts of stratigraphy evolved and came the need to be able to pinpoint the boundaries between periods/systems/stages accurately and because they were different definitions on the Tertiary and Quaternary top and bottom boundaries in the literature, the ICS opted for a completely different system: Paleozoic/Mesozoic/Cenozoic, with the Cenozoic separated into a Paleogene and a Neogene.

But in 2009, the Quaternary was reinstated (see Gibbard et al 2010): the rationale, if I understand correctly, was that the US Geological Survey and the Geological Society of America were still using the Tertiary/Quaternary System and reinstating the Quaternary was somewhat of a compromise. Since the Paleogene and early Neogene had already many GSSPs (which are precisely defined boundaries, with a golden nail planted at the precise datum in the type section), reinstating the Tertiary as well would have been counterproductive at that stage.

To add to the confusion, the "new" Quaternary, as defined from 2009 on, has his bottom boundary defined as the bottom boundary of the Gelasian (the "old" Quaternary bottom boundary corresponded roughly to the bottom of the Calabrian, thus 750kyr younger than the new one), making it overlap with part of the "old" Tertiary.
According to the 2012 edition of "A geological Timescale" (thus Gradstein et al. 2012), the rationale for the lowering of the base of the Quaternary to the base of the Gelasian is because of a now well-established cooling at 2.6/2.7Ma, which is considered to be the beginning of the first glacial/interglacial cycle. 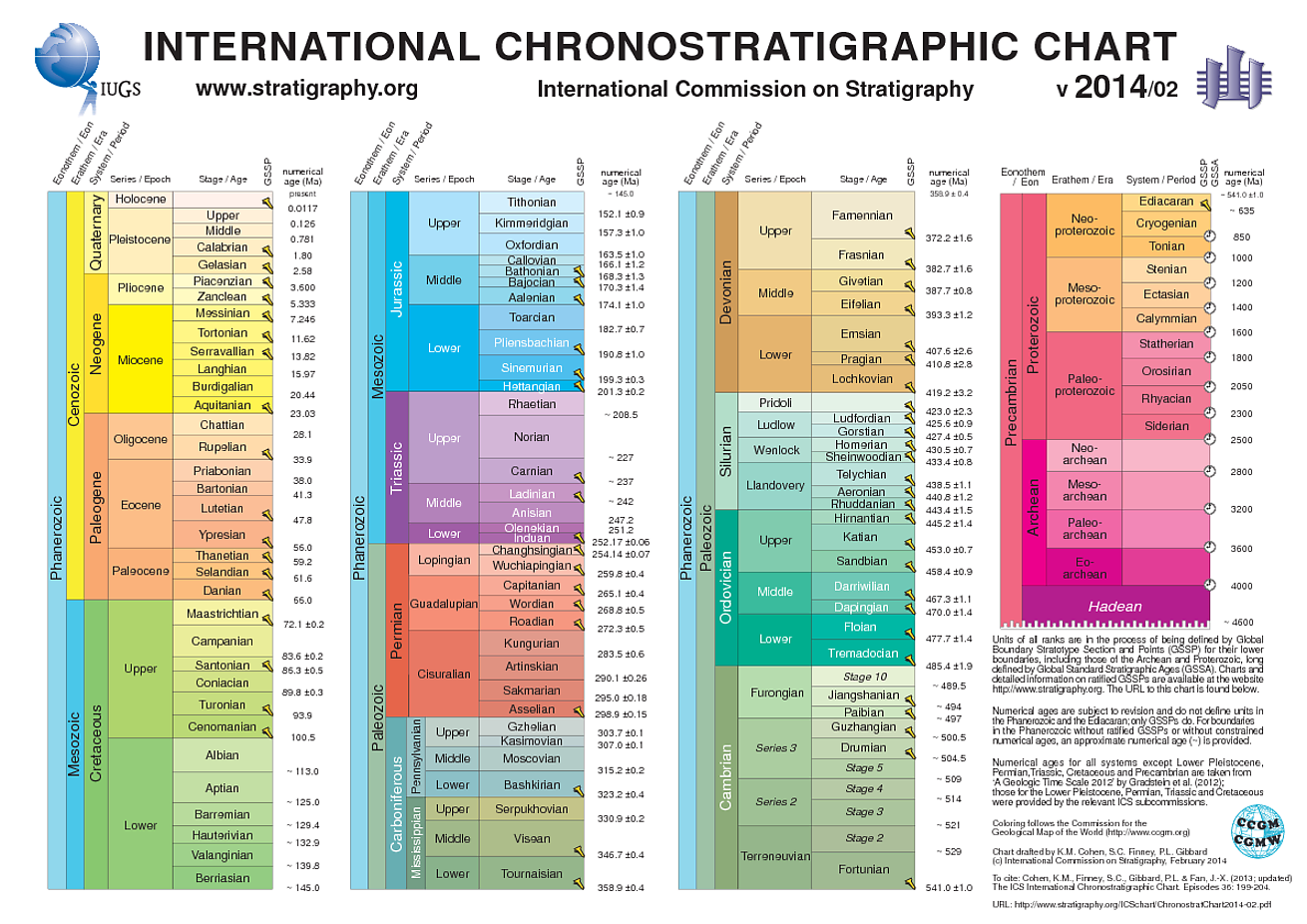 It appears to be part of the reason the Tertiary Period was dropped. Looking at the Wikipedia page on the Paleogene,

By dividing the Tertiary Period into two periods instead of directly into five epochs, the periods are more closely comparable to the duration of 'periods' in the Mesozoic and Paleozoic Eras.

The page on the Neogene says much the same thing:

By dividing the Cenozoic Era into three (arguably two) periods (Paleogene, Neogene, Quaternary) instead of 7 epochs, the periods are more closely comparable to the duration of periods in the Mesozoic and Paleozoic eras.

Not the answer you're looking for? Browse other questions tagged earth-sciences or ask your own question.

11
How did Sedgwick explain the succession of species?
20
Why was the continental drift theory of Alfred Wegener so controversial in the first part of the 20th century?
3
What is the most mature observational science?
2
Old perception of the sunset: the sun is going ABOVE the horizen. does anyone heard such a thing?
2
Why don't geologists adopt Alfred Wegener as the founder of Continental Drift
5
When was the mechanism behind seasons on Earth discovered
10
What was the scientific explanation of earthquakes in the 18th century?
3
When and how was the water cycle discovered?
5
Why did Columbus think the Earth was much smaller than it is?