How far can history of science be traced back?

Medicine is often traced back to Hippocrates, history to Herodotus. These claims of course tell only part of the story, but I've always been fascinated by figures which inspired successors to draw a boundary between themselves and their precursors.

Are there any claims regarding the first attempt at discussing the history of science?

I agree with Mauro's comment that Aristotle was first to take systematic account of the work of his predecessors. Many of his scientific works, Physics, Meteorology, etc., start with detailed description of his predecessors' opinions on the subject, along with Aristotle's own analysis and criticism. Early sources are mostly known in fragments, but nothing comparable appears even in Plato's dialogues or Euclid's Elements (Euclid mentions no names whatsoever despite organizing earlier material, and writing after Aristotle).

Perhaps the first exclusive historian of science (that we know of) was Eudemus of Rhodes (c. 370-300 BC), a student of Aristotle's, who upon his encouragement wrote History of Arithmetic, History of Geometry and History of Astronomy (exclusive in the sense of writing first works specifically dedicated to history of science, not in the sense of writing them only). Not one of them survives, and we know next to nothing about the first, but the last two are our main source of information on Greek geometry and astronomy before 4th century BC. Through quoted fragments and retellings by later commentators such as Proclus, Pappus, Eutocius, Theon of Smyrna, Simplicius, Diogenes Laërtius, Clement of Alexandria and others, Eudemus had that kind of reach. In particular, largely due to him we know some details about geometric and astronomical studies of Anaximander, Anaximenes, Pythagoreans, Oenopides and Hippocrates of Chios, Archytas and Eudoxus. And largely due to him we know more about astronomy before Hipparchus than about it between Hipparchus and Ptolemy.

There is a term for the study of history of science, historiography of science. Wikipedia even has an article about it, although the earliest work they mention is Whewell's History of the Inductive Sciences (1837). However, there is an excellent book The Origin of the History of Science in Classical Antiquity by Zhmud that goes much further back. Here is from the abstract: The first part of the book presents an analysis of those trends in Presocratic, Sophistic and Platonic thought that contributed to the development of the history of science. The second part provides a detailed study of Eudemus' writings in their relationship with the scientific literature of his time, Aristotelian philosophy and the other historiographic genres practiced at the Lyceum: biography, medical and natural-philosophical doxography. Although Peripatetic historiography of science failed in establishing itself as a continuous genre, it greatly contributed both to the birth of the Arabic medieval historiography of science and to the development of this genre in Europe in the 16th-18th centuries". So perhaps Eudemus is the father of historiography of science. If we had a logo he should be on it. 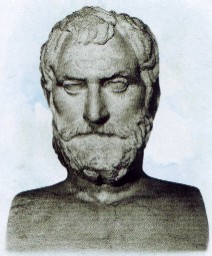 Unfortunately, it did not take in antiquity. Zhmud writes:"Taken as a whole, the surviving texts of Hellenistic mathematicians and astronomers demonstrate that they could not care less about presenting their predecessors’ contribution in a historical perspective. What interested them as a rule was their precursors’ errors and failures, rather than the problems the latter had succeeded in solving". Among Alexandrian scientists Eratosthenes seems to be the only one to follow Aristotle's example:"Eratosthenes approached geography as a scientist and started it, therefore, not with Homer, as Strabo would later insist, but with Anaximander and Hecataeus of Miletus... Joining praise with criticism, Eratosthenes did his best to point out his forerunners’ individual contributions to geography..." However, "unlike mathematicians and astronomers, the Greek engineers of the third century, Ctesibius, Philo of Byzantium, and Biton, the authors of treatises on siege and shooting engines, show a much greater interest in the history of their discipline".

Not the answer you're looking for? Browse other questions tagged ancient-greece medicine or ask your own question.

14
When and how was ionizing radiation found to be harmful?
6
History related to the “2 litres of water per day” theory
8
What is the history of the science about butter, margarine, and health?
5
At what point in the history of medicine did doctors start having a net positive effect?
3
How effective were pre-thermometer devices in e.g. detecting fever?
7
How was the Antikythera Mechanism moved?
5
Has anything survived of the work of alleged science journalist and medical doctor 'Adolph Klein', allegedly born 1829 in Merseburg?