Where did Cartan introduce his notation for basis vectors and covectors?

There is a notation used in differential geometry and general relativity in which the partial derivative operators $\partial_\mu$ are used as the basis for the space of contravariant vectors, and their duals, notated $dx$, are the basis for covariant vectors. I've found a couple of sources that attribute this notation to Élie Cartan:

"for [covectors] a cute notational game due to Élie Cartan, is played" -- Mathematics for Physics II, Michael Stone, cns.gatech.edu/~predrag/courses/PHYS-6124-12/StGoChap11.pdf

"Élie Cartan proposed to use differential coordinates $dx^i$ as a convenient basis of 1-forms." -- Kosyakov, Classical Theory of Particles and Fields, quoted at https://physics.stackexchange.com/questions/144089/is-partial-derivative-a-vector-or-dual-vector

Cartan published his first paper in 1899 and lived until 1951. Can anyone give date, or a reference to the paper in which he first introduced this notation?

Some sluething revealed to me that the first source was really Cartan's La Géométrie des espaces de Riemann, published in 1925 three years before the Lecons sur la geometrie des espaces de Riemann. Looking at the list of Cartan's works, this is the first work on the Riemannian differential geometry. The link for the first source is in the original French; About 60-80% of the text is understandable with only knowledge of English (from my experience, for I do not know French) because the French words for mathematical terms are very similar. For the basis of covariant vectors being $dx$, here are the relevant sections (three sections, close together but with paragraphs in between, images have been posted in French): 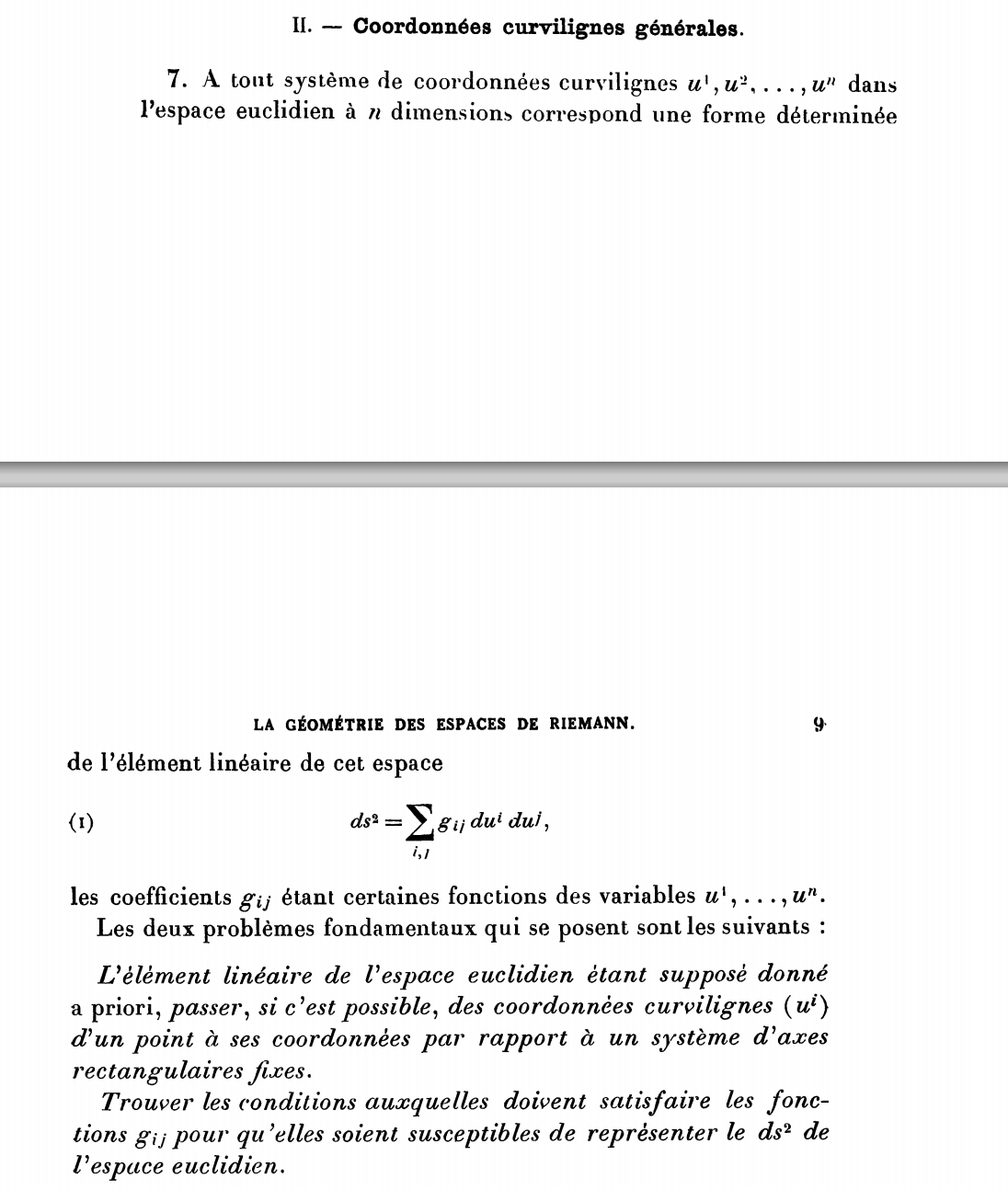 This is the source for the statement ""Élie Cartan proposed to use differential coordinates dxi as a convenient basis of 1-forms," though his terminology is outdated in this context (no mention of basis or of differential forms, even though both are being discussed). I believe that in the second source linked (the one given by Mauro ALLEGRANZA) the notation is more modern (being more 'official' than this one) but I haven't checked.

This is where the cute notational game is played. Although the partial derivate operators aren't explicitly shown, because the inner product of the contravariant and covariant bases equals the metric tensor (second image), by definition the contravariant base would be equivalent to the partial derivative operator. I believe that the more modern notation is in the second source linked, but as I have before stated, I haven't checked.

As an addition to this answer, wythagoras translated the French text to English. Note that he had to reform some of the sentences or split them in two sentences.

The linear element of the Euclidean space is a priori supposed to give rise to a point such that the curvlinear coordinates can be compared to the Cartesian coordinates.

Find the conditions under which the functions $g_{ij}$ are able to represent the $ds^2$ from the Euclidean space.

The conditions for integrability of equation (4) provide the other equations. First notice that the first member of equation (4), which we call $Dx^i$, represent the components of motion of a mobile point, of which the coordinates, comparing to (R), would be $x^i$. Likewise the components of the geometric variation of a vector $X^i$ would be: $$DX^i = dX^i + \sum_{k,r} \Gamma^i_{k,r}X^k du^r$$

Differentials and their linear combinations already appear in full glory in Cartan's first paper on Pfaffian systems Sur certaines expressions différentielles et le problème de Pfaff (1899), where he works out some of their algebra. But he was not the first to use them, the paper mentions Pfaff, Natani, Clebsch, Lie, Frobenius and Darboux, and in L’intégration des systèmes d’équations aux différentielles totales (1901) he references Biermann's 1885 paper Ueber n simultané Differenlialgleichungen der Form $\sum X_\mu dx_\mu$. "It was Pfaff who pioneered the study of exterior differential systems by his formulation of the Pfaff problem in [Pfaff 1814-15]. The exterior derivative of a pfaffian form, called the bilinear covariant, was introduced by Frobenius in 1877 and efficiently used by Darboux in [Darboux 1882]", see Exterior Differential Systems.

Did they think of $dx_\mu$ as "basis of $1$-forms"? Certainly not Pfaff, linear algebra as we know it did not emerge until Sylvester and Cayley later into the century, but it does not mean that he could not play the "notational game" without the terminology. Cartan's innovation, which came in his 1922 book Lecons sur les Invariants Integraux, was extending the exterior differential, and the game, to higher order forms, but he inherited manipulation of $d$'s from much earlier. In fact, at a formal level some of this game goes back to Leibniz, who would write differential equations in differentials to separate variables, etc. As for $\partial$'s the game, if not the notation, goes back to at least moving trihedrons in Darboux's Leçons sur la Théorie Générale des Surfaces, although it was Cartan who greatly advanced the method and generalized it to higher dimensions.

Not the answer you're looking for? Browse other questions tagged notation differential-geometry or ask your own question.

5
How did the exterior product get its symbol?

8
When was the short notation for large numbers first introduced and why?
14
What is the origin of polynomials and notation for them?
0
Abbreviated Notation for Groups, Rings and Fields
2
Did Clifford introduce the “Clifford torus”, and for what purpose?
4
Old square bracket notation for units
1
Notation for conditional probability
6
Notation for fiber bundles - why E for total space?
11
Notation for Christoffel symbols
6
Where did the term “set-builder notation” come from?
2
Where did Euler prove 'his' theorem on homogeneous functions?