Timeline of measurements of the electron's charge

Where can I find a paper or reference that describes the timeline of measurements of the magnitude of the electron's electric charge.

For context, Millikan's oil drop experiment in 1908 determined the charge of the electron to be 1.59*10^(-19) C, which is lower than today's accepted value. Richard Feynman is quoted as saying, in 1974, that subsequent experimental attempts to measure the charge were biased by Millikan's initial value:

Why didn't they discover the new number was higher right away? It's a thing that scientists are ashamed of—this history—because it's apparent that people did things like this: When they got a number that was too high above Millikan's, they thought something must be wrong—and they would look for and find a reason why something might be wrong. When they got a number close to Millikan's value they didn't look so hard. And so they eliminated the numbers that were too far off, and did other things like that...

Is there a reference that shows the temporal evolution of the electron's charge values? The most I've found is a statement that the values did change, but not what those values were.

If anyone's still reading this thread, here's a few more data points that appear to back Feynmann's interpretation.

Concludes with a note added at the proof stage: "Backlin and Flemberg’s result, however, comes down to $4.778\cdot10^{-10}$--or very nearly to Millikan's 1917 value! This is a most unfortunate note on which to end the Report." 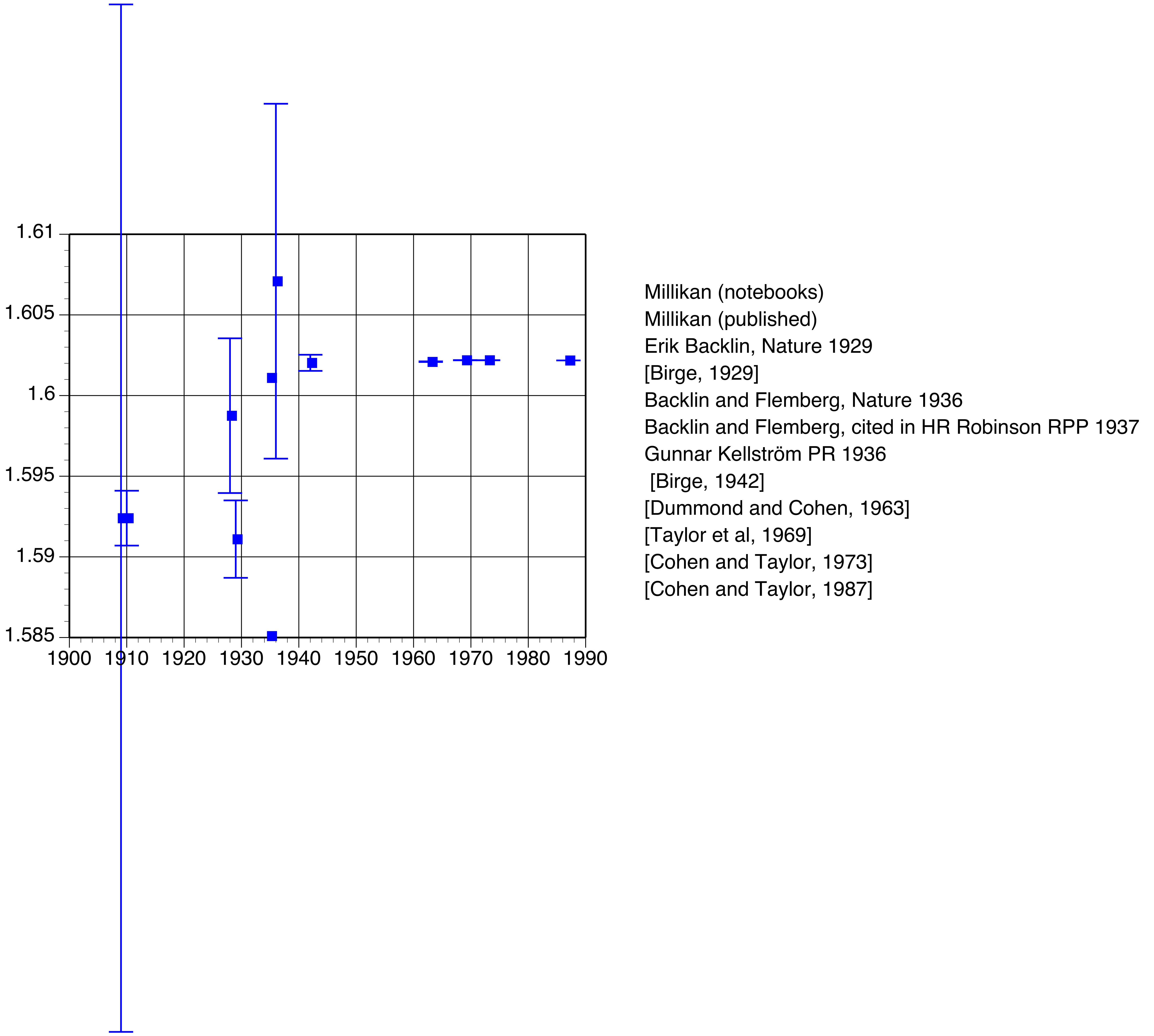 The 16th (1995) edition of Kaye and Laby includes the following progression of the accepted values for the charge of an electron. The first value "is essentially Milikan's oil drop value" and the second is "the 'X-ray grating' value". I couldn't find any more details about the actual experiments. The standard errors are often over-optimistic, indicating unexpected systematic errors; in Milikan's case this was due to an inaccurate value for the viscosity of air. 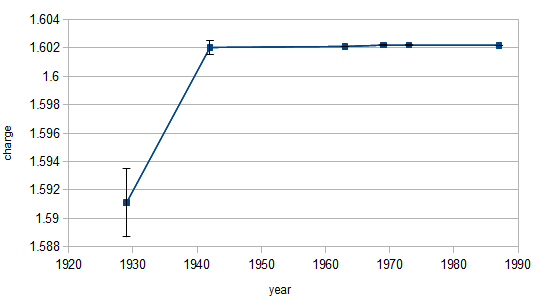 Interestingly, this doesn't really seem to bear out Feynmann's assertion. However, it would be useful to see the progression of values between 1929 and 1942: e.g. from K&L 8th edition (1936).

Not the answer you're looking for? Browse other questions tagged experimental-physics reference-request bias or ask your own question.

10
Why did George Cayley never crack the stability problem?
5
Any book on the timeline of progress of mathematical concepts and applications?
9
Were there serious attempts to model the photoelectric effect classically?
12
Why is Ingenhousz's 1784 study of fine charcoal in uncovered alcohol interpreted as Brownian motion, thus giving him priority over Brown?
4
What mathematical techniques Gauss used in order to tessellate the unit disk?
2
Several questions about Gauss's mathematical conception of braids
5
Earliest Instances of a Slope/Direction Field for a First-Order ODE
0
What experiments led to the sign of the electron's charge?
0
Was Einstein's "Maschinchen" a predecessor of the photomultiplier tube?