Why did Newton want lines to be generated by continued motion of points rather than by apposition of parts?

The following passage has been extracted from the Newton's (John Stewart's English translated version) "Sir Issac Newton's two Treatises: Of the Quadrature of Curves, and Analysis by equations of an infinite number of terms":

I consider mathematical quantities in this place not as consisting of parts; but as described by a continued motion. Lines are described, and there by generated not by the apposition of parts, but by the continued motion of points; superficies's by the motion of lines; Solids by the motion of superfices's; Angles by the rotation of the sides; Portion of time by a continual flux: and so in other quantities. These geneses really take place in nature of things, and are daily seen in the motion of bodies. And after this manner the ancients, by drawing moveable right lines along immoveable right lines taught the genesis of reflection...

Here Newton doesn't provide any reason on why he wants to describe lines to be generated by the "continued" motion rather than by the appositon of parts (= points??). Is there any reason for his preference for motion view?

And I noticed that Newton doesn't define point. I don't understand whether he is following Euclid's method of having some of the terms to be undefined, or some other philosophy. I want to know Newton's view on mysterious points. I will be really happy if sources on this regard (Newton's view on points) is provided.

References to the full latin text:

I have asked same question in PSE too.

Problem: classical geometry is not happy with infinitesimals

Newton is systematically trying to avoid basing calculus on infinitesimal geometric quantities. We can see this from how he emphasizes that his method is consistent with the "ancient" standard of rigor:

To institute an Analysis after this manner in finite Quantities... is consonant to the Geometry of the Ancients... in the Method of Fluxions, there is no necessity of introducing Figures infinitely small into Geometry.

(Page 4 of the English translation cited in the question, page 6 of this scanned Latin edition - note that the page numbers refer to the numbering as printed on the actual scanned dead-tree pages, not the electronic numbering.)

Recall that before the modern era, the standard for rigor in mathematics was Euclid, and Newton followed the tradition by using geometric figures and arguments whenever possible. Now sure, classical geometry had what we now call the method of exhaustion. But it did not have the notion of limits or infinitesimals the way Newton did. Especially since the foundations of calculus were controversial from the start, Newton needed his ideas to be agreeable with the standards of classical geometry.

Solution: frame the foundation in terms of motion, not geometry

Calculus has both a geometric interpretation and a dynamic interpretation - think tangent lines vs. rates of change. You learn this early on. But arguments directly in terms of infinitesimal geometric figures don't fit into the classical geometry. If you appeal to motion and change, though, you can use perfectly reasonable and familiar concepts. For example, a secant line that moves and becomes a tangent line sounds a lot more believable than supposing you can just take two "infinitely close" points and take the secant line through them. There's some hand-waving going on either way, but the latter flies directly in the face of classical geometry, which, remember, was the standard of rigor. Framing calculus in terms of motion shifts the controversial foundation further from geometry, where it would face stricter scrutiny.

With this in mind, we can interpret the quote as establishing the emphasis on the dynamic viewpoint. Essentially, Newton is saying: Don't worry, we're not gonna do infinitesimal geometry. We're not gonna break a line or anything down into absurd infinitesimal parts which may not really be possible. Just view a line as the path traced by a moving point. With this viewpoint, we can appeal to concepts like velocity to justify our arguments. We can usefully apply calculus to geometry, without having overtly infinitesimal geometry.

And of course the perspective helps teach the important interplay between the geometric and dynamic interpretations of calculus.

P.S. Notes on the quote

For completeness, here is the quote in Latin:

You had some hypotheses about some particular words and phrases in the quote, so here are my comments on them specifically.

Seeing as Newton developed a lot of what we now define as Calculus I, it makes sense that he would consider lines as continuous/differentiable, as opposed to his contemporaries who might have only considered them a finite collection of smaller line segments or points.

Calculus is, after all, the analysis of change of "mathematical quantities" at infinitesimally small distances. My interpretation: Newton is claiming that he works with lines under the assumption that there is a "continuous motion" or differentiability at every point.

Although Newton was certainly trying to avoid infinitesimals there is some distance between "no infinitesimals" and "no points", after all we now have calculus with points but without infinitesimals. Moreover, Newton's goal was not to invent calculus, but to analyze motion, so his reasons were somewhat deeper. Zeno's paradox Arrow argues that if time consisted of instants then flying arrow would never move, because within an instant there is no difference between arrow in flight and arrow at rest. Zeno, and Plato after him, concluded that motion is but an illusion and should be banished from geometry, position loyally followed in Euclid's Elements, but obviously unacceptable to Newton.

Aristotle offered an alternative resolution that "saved" motion: time does not consist of instants, a magnitude can only be broken into smaller magnitudes, but never into points. This was the price of making the arrow fly, see Aristotle's objection to Zeno's paradox. After Euclid some prominent geometers, notably Archimedes and Apollonius, considered curves generated by combining linear and circular motions. Newton was very familiar with such curves, as well as with Aristotle and Euclid. Fermat and others tried to get around the issue with infinitesimals, but motion itself provided Newton with a natural alternative, what we now call limits, and what he called "first and last ratios". As he wrote in Principia:"Quantities and ratios of quantities which in finite time converge continually to equality and before the end of that time approach nearer to each other than by any given difference, become ultimately equal".

Newton's definition sounds similar to the modern explanation of limits, but to make it a definition today we use three nested quantifiers $\forall\varepsilon>0\,\exists\delta\,\forall x: |x-x_0|<\delta\Rightarrow|f(x)-a|<\varepsilon$. Aristotle's syllogistic, the only logic known to Newton, had no quantifiers, and while $\forall x$ can be simulated with variables, $\exists x$ with constants, and even $\forall x\exists y\,P(x,y)$ with implicitly defined function $y=f(x)$, the combination $\forall\exists\forall$ needed to express convergence to limits is beyond it. But it is not beyond kinematic interpretation, which simulates the missing quantifier dependence, but requires that lines and other magnitudes be generated by motions in the first place. So the quote in the OP is essentially Newton's definition of "quantity". Newton's "first and last ratios" manage to express the modern limit concept without quantifiers, but at Aristotelian expense of sacrificing decomposition of magnitudes into points.

This is explained by Friedman (pp. 477-481) Kästner in his influential mathematics textbooks, remarkably for an 18th century German author, "argues that Newton's fluxions are in some respects clearer and more perspicuous than Leibniz's differentials. Further, he explicitly applauds Collin Maclaurin's attempt, in his monumental Treatise of Fluxions (1742), to develop the calculus on the basis of a kinematic conception of the limit operation". And "when the kinematic interpretation was explicitly criticized by mathematicians like D'Alembert and l'Huilier in the late eighteenth century, it was not on grounds of coherence and consistency but because it was thought to import a "foreign" or "physical" element into pure mathematics".

Comment (in the answer window for the sole reason of being able to include the orignial quote from Descartes' book):

This thread still seems to lack the basic remark that probably Newton's reasons were much less a negative attitude towards building a line from parts than rather a positive attachment to the long tradition of favoring contructibility in geometry (not only in the Greek authors, but also in Descartes, whose work influenced Newton strongly). In 'Livre premier' of La Géométrie, Descartes (1) declares that in his opinion, it is required to find a method of drawing a curve which one already knows as a set of points, (2) reproaches Pappus of not having sufficiently 'described' curves which he had indirect determined. I submit that normative statements like Descartes' "il est aussy requis de [...] tracer la ligne" have had an effect on Newton. 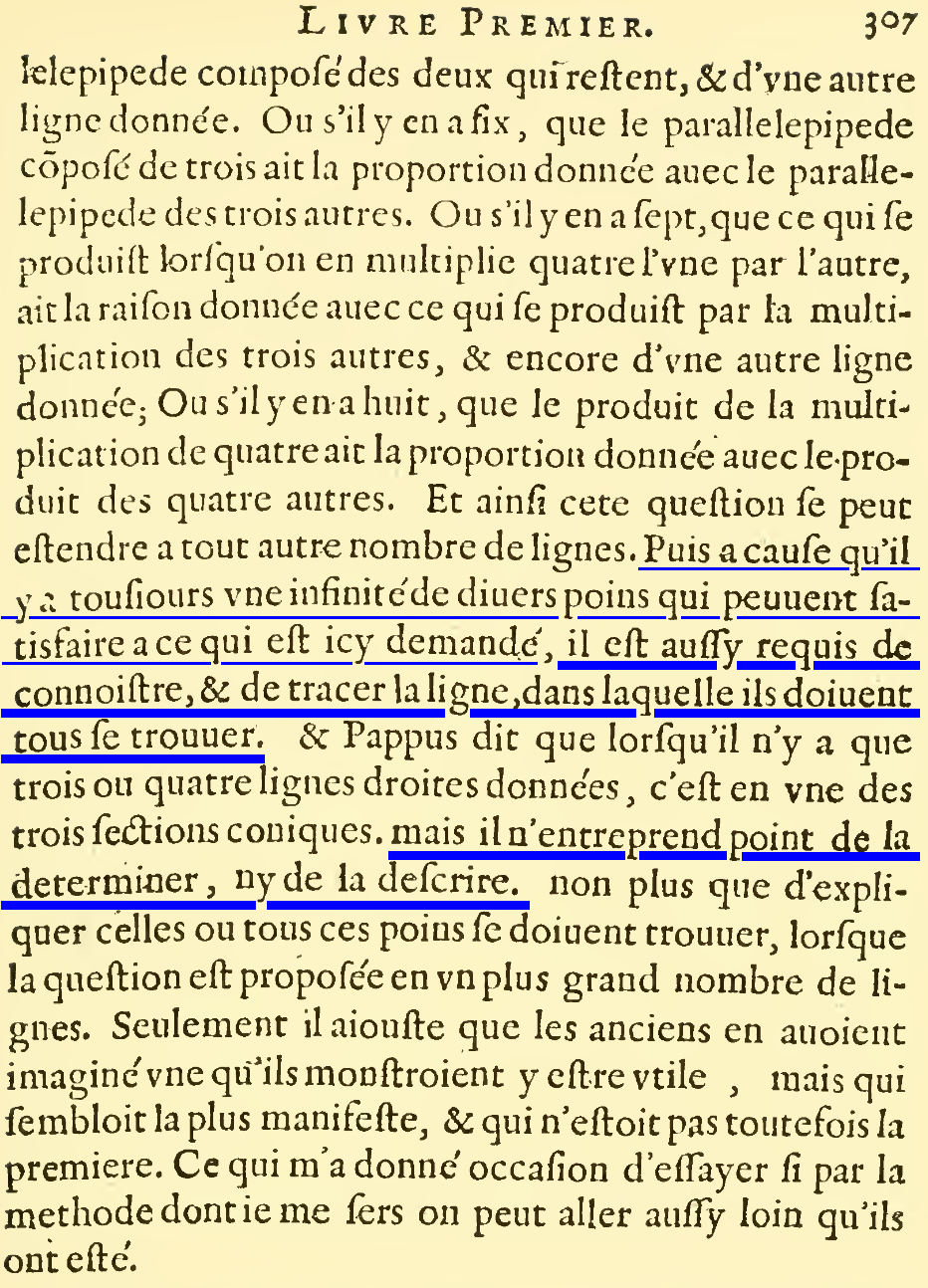 As translations are available, I don't translate the above page. (Except for the archaic orthography, this is easy French, still understandable if one knows contemporary French.)

Not the answer you're looking for? Browse other questions tagged mathematicians calculus philosophy-of-science geometry or ask your own question.

6
Why did Aristotle make mistakes in his laws of motion?
3
Why did Einstein get a better hearing in Göttingen than Berlin?
5
Why did Columbus think the Earth was much smaller than it is?