What is the truth behind "The Turk" (the mechanical chess machine)?

It was in lime light for more than a century (late 18th century to late 19th century). They say it was inspected and found fake. But, what was fake about that. There are stories that this machine won most of the matches it played. It didn't just won chess games, but it was able to complete the knight's tour(a famous chess puzzle) easily. Which most experienced chess players of that time struggled with.

Does that mean Kempelen (who created this) was himself a genius or sort of world champion chess player of that time ?

I vaguely remember learning about the Turk in a documentary about Gary Kasparov and his match with Deep Blue. It seemed really impressive, even if it wasn't actually an automated chess-playing robot.

Here's the relevant Wikipedia article. Once again, I won't use it as a primary source, but I think that the following passage from Wikipedia gets to the heart of the matter:

The Turk was in fact a mechanical illusion that allowed a human chess master hiding inside to operate the machine. With a skilled operator, the Turk won most of the games played during its demonstrations around Europe and the Americas for nearly 84 years, playing and defeating many challengers including statesmen such as Napoleon Bonaparte and Benjamin Franklin. The operator(s) within the mechanism during Kempelen's original tour remains a mystery.

I'll quote a passage from here, summarizing how the machine worked:

The secret of the Mechanical Turk was kept for over 50 years – the machine was an elaborate illusion, and contained an ingeniously hidden compartment that housed a human operator. This hidden chess master could observe the position on the chessboard above, and manipulate the movements of the Turk.

From here, we have a slightly more in-depth summary (although I'm not too happy about the source; you can disregard it if you want):

Although many people had guessed that the machine actually had an operator working from the inside, few were able figure out exactly how it worked. There were guesses that the operator must be a child to fit inside the cabinet, or that someone was actually poised partially inside the figure that moved the pieces.

In fact, the operator inside the cabinet sat on a sliding seat, allowing them to adjust their position as a presenter opened doors to show what was supposedly going on inside the machine. Over the years, a number of talented chess players were responsible for playing the games, which helps explain why the machine rarely lost except when up against elite competition. From inside the cabinet, the operator could see a magnet version of the board that reacted to the movement of the pieces above (each had a strong magnet in its base) so that they were able to keep track of the position. Levers allowed for the movement of the Turk's arm and the opening and closing of its hand, which made it possible to move the pieces on command.

From here, we get a re-creation of the machine. Here (from the site) is part of the mechanism controlling the arm: 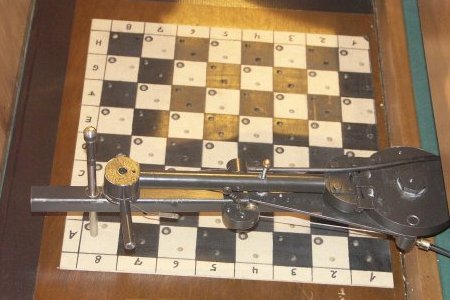 Here is a picture of the arm mechanisms:

Finally, I go to this page, where we find some key information:

The concealed chess expert was cramped, hot, had to operate various levers, and worked by candlelight. But he had two advantages over his opponents:

Not the answer you're looking for? Browse other questions tagged mathematics chess or ask your own question.