About the LOR of John Nash, was there any relationship between Richard Duffin and Solomon Lefschetz?

In Academia SE, there is a question about the credibility of Prof. Richard Duffin, who wrote the notorious letter of recommendation for John Nash, who later received the Nobel Memorial Prize in Economic Sciences. Its answers focus on the credibility of Duffin to the academic/mathematic world. However, since this letter was sent directly to Prof. Solomon Lefschetz, not the adcom, so I have another theory that Duffin had directly credibility to Lefchetz, that is they were friends, or at least know each other personally.

Do you know the relationship between these two professors? I have check their Wikipedia page, but I can't find any evidence.

• Will a recommendation letter such as that written for John F. Nash be convincing? on Academia
• John Forbes Nash, Jr, Richard Duffin, Solomon Lefchetz on Wikipedia
Image taken from the Graduate Alumni Records of Princeton University: 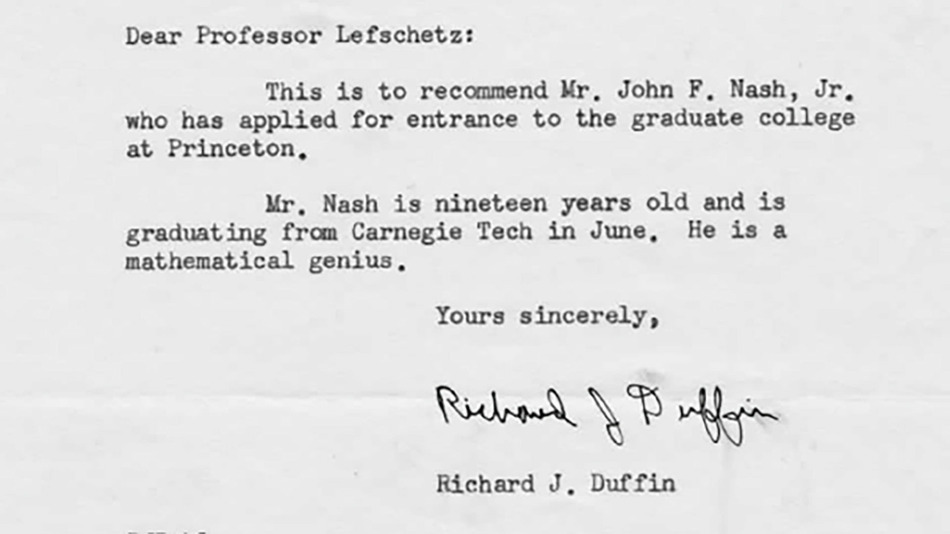 Browse other questions tagged mathematicians or ask your own question.

19
What was the connection between David Hilbert and Stefan Banach?
9
Who was first to differentiate between prime and irreducible elements?
5
Is there any complete works of Abel, Lagrange, Jacobi and Gauss translated into English?
2
Are there any sources of mathematicians talking about their research methods?
2
Who is the John Thomas of "Thomas's Plank" and "Thomas's Corkscrew"?
6
What was Richard Courant's saying about mathematical research apart from applications?