Was Einstein the first person to think of the equivalence of a ball drop in an accelerated elevator and a ball drop on Earth? 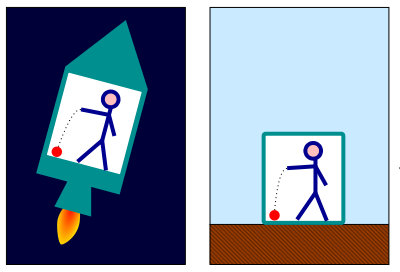 Was Einstein the first person to think of the equivalence of a ball drop in an elevator with acceleration of $g$ and a ball drop on Earth?

To be honest, I was also thinking of it before I learned relativity in high school.

Einstein also considered weightlessness in free fall as a manifestation of equivalence between inertial forces and gravity. Although simple drum-rope elevators were constructed as early as 236 BC (by Archimedes) they started to spread after 1854, when Otis gave a dramatic demonstration of his safety catch invention by cutting holding ropes while people were inside. By 1900s a good number of people probably did drop balls in some of them, but as far as we know none of them analyzed the physics involved, or expressed their thoughts in print. This being said, there were authors who imagined what it would be like in a vertically accelerating vehicle, but they wither did not focus on the physics, or did not get it quite right.

Possibly, the first was Islamic polymath Avicenna (c. 980-1037) with his Floating Man argument, the literal translation is "falling man". Avicenna was not concerned with physics, he argued that a person can be self-aware even if from birth deprived of all sensory input, including weight. It is unclear however what Avicenna thought cancels the effect of weight, free fall or air buoyancy. First definite account of weightlessness is attributed to Francis Godwin's novel Man in the Moone (1638) written before Newtonian mechanics was even established. The character is carried upward by birds, who "strooke bolt upright, and never did linne towring upward, and still upward, for the space" until "the Lines slacked; neither I, nor the Engine moved at all, but abode still as having no manner of weight". But Godwin's weightlessness is due to weakening of gravity rather than to inertia countering it:"those things which wee call heavie, do not sinke toward the Center of the Earth, as their naturall place, but as drawen by a secret property of the Globe of the Earth, or rather some thing within the same, in like sort as the Loadstone draweth Iron, being within the compass of the beames attractive".

It is unlikely that Einstein was aware of Godwin, but he might have encountered Jules Verne's novels From Earth to the Moon (1865), and Around the Moon (1870). They were quite popular at the time, and even inspired a 1902 silent film. In them travelers are launched to the Moon from a moongun in a projectile called Columbiad. Verne was aware of the overload forces, and protected his passengers from them with hydraulic and frangible shock absorbers, but it did not occur to him that they would be working like gravity. Moreover, he expected the passengers to feel the pull of gravity throughout the journey despite being mostly in free fall. Only near the "neutral point", where the gravity forces of the Earth and the Moon balance out, did he expect weightlessness:"But that day, about eleven o'clock in the morning, Nicholl having accidentally let a glass slip from his hand, the glass, instead of falling, remained suspended in the air. "Ah!" exclaimed Michel Ardan, "that is rather an amusing piece of natural philosophy"".

In Exploration of Outer Space by Means of Rocket Devices (1903) Tsiolkovsky presented detailed engineering calculations related to launching rockets into space. In particular, he concluded that the Verne's moongun would have to be impossibly long for the passengers to survive the acceleration overloads at take off, and offered rockets as the alternative. But he did not comment either on the gravity like behavior of the inertial forces, or on weightlessness.

Not the answer you're looking for? Browse other questions tagged physics relativity-theory gravity or ask your own question.

8
Who discovered that different objects accelerate at the same rate due to gravity?
14
What was Einstein's motivation for relativity theory?
23
In ancient times, how did people conclude that the shape of Earth is a sphere?
25
What attracted Einstein to the anomalous precession of Mercury?
4
When and how was water first detected outside of Earth?
2
How Einstein got the first idea for special relativity?
4
How did physicists deal with the variance of electromagnetism before special relativity?