I'm trying to find the original papers describing Young's double slit experiments including his experimental set-ups and findings. I've tried looking and all I can find is http://www.biodiversitylibrary.org/item/63005#page/498/mode/1up and http://rstl.royalsocietypublishing.org/content/92/12 But neither are papers describing the experiments.

In this sandbox I made an excerpt for myself. All citations are originally in English, some comments are in German. At the end there is a link to "A Course of Lectures on Natural Philosophy and the Mechanical Arts".

BTW, diffraction of light was known long before Young. Francesco Maria Grimaldi wrote in his book "Physicomathesis de lumine, coloribus et iride aliisque annexis, libri II" in 1665 about diffraction from a rod and a pinhole.

An amazing fact is, that Young's sketches about water waves and their interferences sometimes is interpreted as a sketch for light interference (Fig. 267). 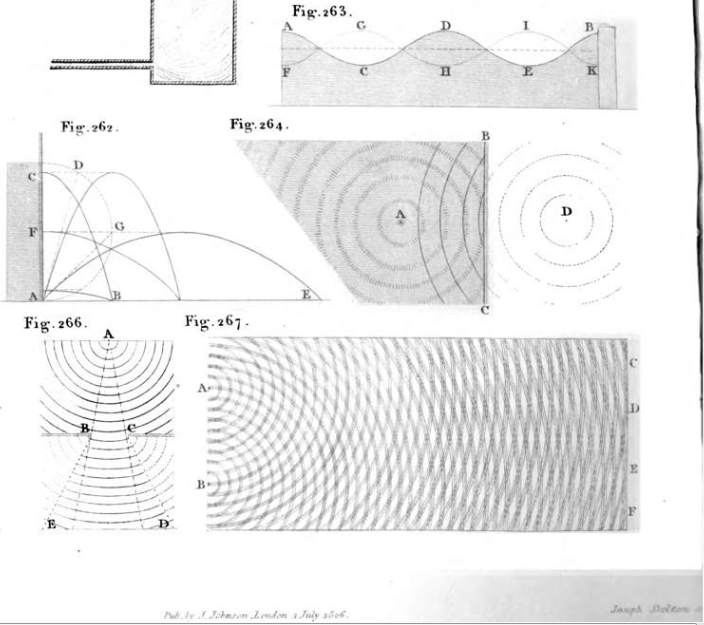 Not the answer you're looking for? Browse other questions tagged physics experimental-physics quantum-mechanics or ask your own question.

11
How did Young perform his double slit experiment?
12
Why is Ingenhousz's 1784 study of fine charcoal in uncovered alcohol interpreted as Brownian motion, thus giving him priority over Brown?
5
Who was first to observe or detect photons in the double slit experiment, and how did they do that?
5
Corpuscular theory of light and Double slit experiment
5
What is the original source for Einstein's description of entanglement as "Spooky Action at a Distance"?