On Nov 12, 1946 the Americans organized a contest in Japan to compare the Japanese Abacus with the American Electric Calculator. The Abacus won:

"Civilization, on the threshold of the atomic age, tottered Monday afternoon as the 2,000-year-old abacus beat the electric calculating machine in adding, subtracting, dividing and a problem including all three with multiplication thrown in, according to UP. Only in multiplication alone did the machine triumph..." 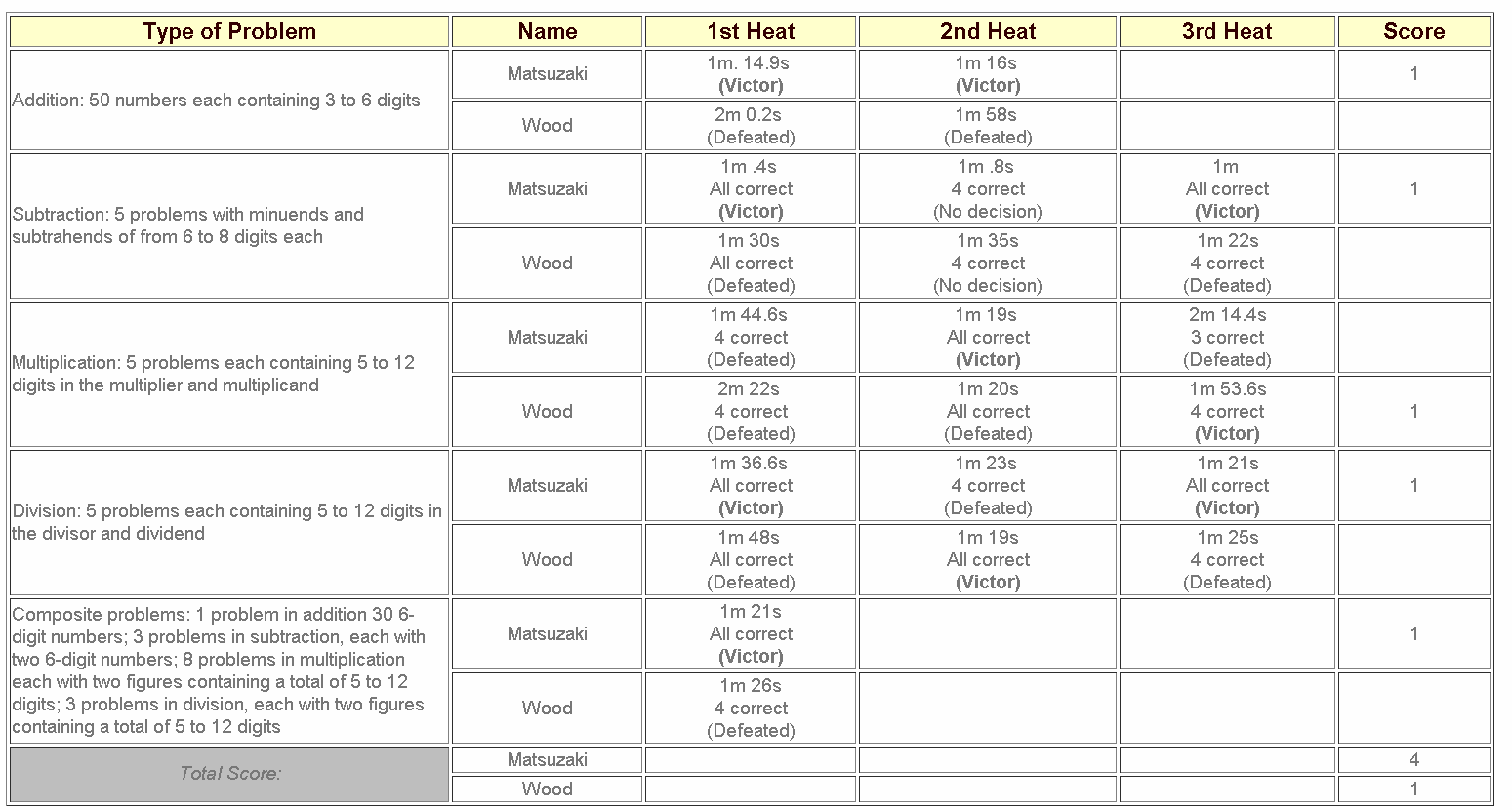 How comes the abacus lost the multiplication sub-contest, and won the 3 others (addition, subtraction and division)? From what I recall, but I cannot find the source anymore, this was at least partly due to the fact that an officer has to pronounce the numbers: unlike the calculator operator, the abacus operator could start computing before hearing the last figure of the numbers to be computed. Is that true and if so would giving the numbers to be completed written down on some papers have made any difference?

With this kind of "why?" question, one can only speculate. However, it's interesting that Feynman had a similar experience, as recounted in Surely, You're Joking, Mr. Feynman!

Feynman was sitting in a restaurant, when

A Japanese man came into the restaurant. I had seen him before, wandering around; he was trying to sell abacuses. He started to talk to the waiters, and challenged them: He said he could add numbers faster than any of them could do.

The waiters didn't want to lose face, so they said, "Yeah, yeah. Why don't you go over and challenge the customer over there?"

Feynman of course was the customer. He accepted the challenge. Feynman lost with addition and subtraction, even when both contestants were given the numbers written down. But Feynman almost matched him with multiplication, tied with division, and mopped the floor for cube root problems. Feynman remarked, "What he didn't realize was, the harder the problem, the better chance I had." Feynman's explanation:

I realized something: he doesn't know numbers. With the abacus, you don't have to memorize a lot of arithmetic combinations; all you have to do is to learn to push the little beads up and down. You don't have to memorize 9+7=16; you just know that when you add 9, you push a ten's bead up and pull a one's bead down. So we're slower at basic arithmetic, but we know numbers.

The Wired article you link to says something similar:

Ultimately, the soroban is not as much about mental dexterity as it is about mechanical skill, says soroban user Yannic Piché.

OK, now I will speculate in force. Compare addition with the abacus to drumming or playing the piano. The activity demands little of memory, or rather, it's mostly muscle memory. As with any physical skill, endless practice turns mental operations into reflex actions. (With drumming and piano playing, this frees the mind to concentrate on expressiveness and musicality.)

Lots of mental arithmetic tires the brain, far more (I'd wager) than pushing beads up and down.

Not the answer you're looking for? Browse other questions tagged mathematics computer-science or ask your own question.

1
Did Turing ideas make any impact on Psychology or Brain Science? Why?
6
Who created Agile programming and why?
3
Was the computer invented through the influence of the printing press or through the influence of the calculator?
10
Why is the Halting problem attributed to Alan Turing?
4
Why would Margaret Hamilton and her team at NASA print the code on paper?
2
How did Lenna become the most used image in image processing?
1
When did the study of the rate of convergence of algorithms begin?
4
Why so hard to find references to pictures of Raymond Boyce?