On Einstein's proof of the so-called Pythagorean theorem

In E. Maor's book [2, p. 117] we read that, somewhere in his Autobiographical Notes, Einstein wrote this:

An uncle told me about the Pythagorean theorem before the holy geometry booklet had come into my hands. After much effort I succeeded in "proving" this theorem on the basis of the similarity of triangles; in doing so it seemed to me "evident" that the relations [ratios] of the sides of the right-angled triangles would have to be completely determined by one of the acute angles...

E. Maor adds that Einstein's proof of the Pythagorean theorem was reconstructed by Einstein's biographer and collaborator Banesh Hoffmann (for more information in this regard, E. Maor points his readers to [ 1 ]). Then, E. Maor mentions that what B. Hoffmann put forward as Einstein's proof of the Pythagorean theorem turns out to be basically "the first of the 'algebraic proofs' in Elisha Scott Loomis's book (attributed there to [a certain David] Legendre but actually being Euclid's second proof; see [4, p. 24] or look for "proof using similar triangles" in this webpage)".

Having said all this, I would like to ask you the following questions:

I. a) How did B. Hoffmann manage to "reconstruct" Einstein's proof of the Pythagorean theorem? b) Do we know which his references were? c) Did the "reconstruction" in question was actually recognized as the one by Einstein in his lifetime?

S. Strogatz in this article, published a month ago in The New Yorker, defies, based on [5, pp. 3-4], the consensus among several biographers of Einstein (Hoffmann included) as to how it was that Einstein's proof of the Pythagorean theorem actually went. According to Schroeder (and Strogatz), Einstein considered, just as in the figure below, the altitude to the hypotenuse $AB$ of the right-angled triangle $ABC$: 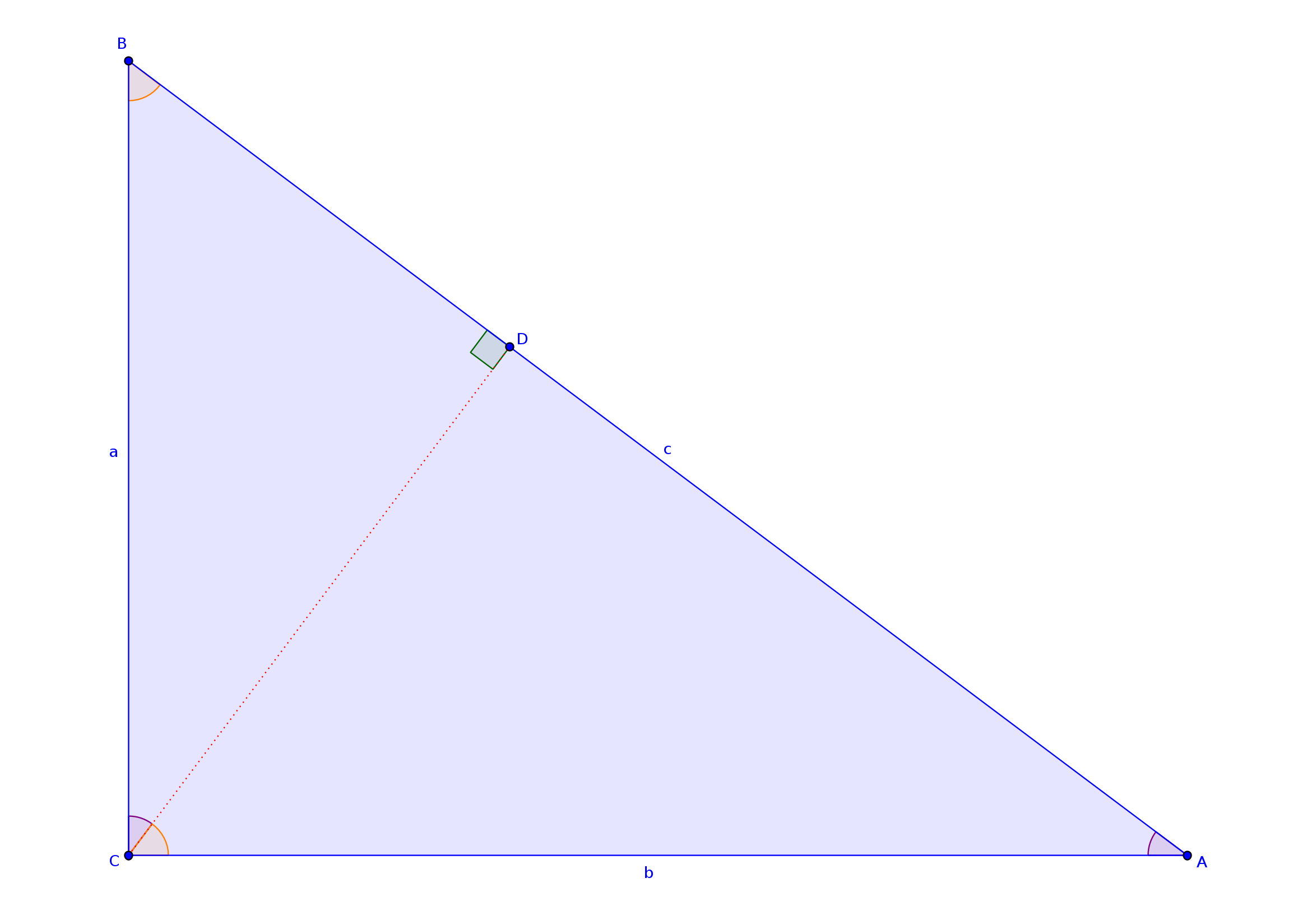 On the other hand, if

$$\mathrm{area}(\triangle ABC) = \left(\frac{c}{a}\right)^{2} \mathcal{A}$$ (it has to be recalled that, according to Eucl. VI-19, the ratio of the areas of two similar triangles is equal to the square of the ratio of any two corresponding sides). From this and $(*)$, it follows that

obviously, the Pythagorean theorem is an immediate consequence of the above equality.

In the opinion of Strogatz, this proof is neater than the one typically attributed to Einstein; naturally, I agree with him in this respect. Besides, it has to be noted that it is basically through this approach that B. Mazur proves in [ 3 ] a much more general version of the Pythagorean theorem (which Mazur refers to as the blob Pythagorean theorem). Nevertheless, Strogatz's article originated in my psyche the following questions:

Regarding II(c): Strogatz/Schroeder does offer a string of connections to Einstein through Shneior Lifson and Erst Straus, one of Einstein's assistants at IAS. But it would be hard to connect Einstein and the young Jashemski, since Einstein came to the US in 1933. There are many instances of people coming up with the same proof independently, especially on something as well studied as the Pythagorean theorem (I understand your rationale for "so-called," but I think that's a losing battle---see also Was Pythagoras Chinese? by Frank Swetz, 1977).

I wonder if Loomis's "young man of superior intellect" is the same Stanley Jashemski who graduated from U. Chicago in 1943, worked as a physicist for the Navy, and is best known as the husband of Wilhelmina Feemster Jashemski, a U. Maryland historian who specialized in the gardens of Pompeii (Stanley took the pictures for her research).

Well the original post seems to be assuming Einstein is lying. I see no reason why he should lie about his original proof. Strogatz/Schroeder had numerous mutual associates to Einstein through Erst Straus; such communication would not have occurred without confirming with Einstein first. Not all of Einstein's letters after 1930 have been vetted yet.

Einstein's use of differential equations on curved manifolds should give him the benefit of the doubt. We likely have more evidence that he completed such a proof than we do of the true origins of the Pythagorean Theorem.

He taught himself differential and integral calculus at 14. He would've made a brilliant geometer if he was interested in it. It's very unlikely that such a proof would have survived into adulthood, but the proof cited above has the hallmarks of Einstein's cognitive elegance.

The story referenced in his autobiographical notes is significant because he consciously (or subconsciously) left out many of his seminal contributions to quantum theory in his autobiographical notes (he doesn't even mention his prescient work on spontaneous and stimulated emission). I have a hard time believing Einstein would just make something like this up - and again, those differential equations I have to struggle with in GR suggest his command of geometry was exceptional. GR is hard sledging, his geometry chops were top notch.

Not the answer you're looking for? Browse other questions tagged mathematics euclidean-geometry debunking pythagorean-proposition or ask your own question.

22
Why is the Pythagorean Theorem so ubiquitous?
8
Who came up with the “proof” that all triangles are isosceles?
7
Viète's Relevance and his Connection to Euler
3
Where was the Banach-Mazur Theorem originally published?
8
Euler's first proof of $e^{ix}=\cos(x)+i\sin(x)$
3
Does any extant Greek text prove that the area of an inscribed regular polygon increases with the number of sides?
6
Did Gosper or the Borweins first prove Ramanujans formula?
0
Did Baudhayan publish Pythagoras theorem before Pythagoras?