When did the people start using the portraits of the two Euclids interchangeably?

According to the folks of Wikipedia, this is the portrait of Euclid of Alexandria (the "Father of Geometry"): 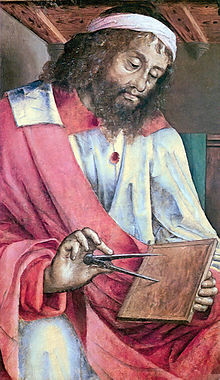 Thus, I would like to know if it is known when it was that the people started using the portraits of the two Euclids interchangeably...

We have very few information regarding the author of the Elements, called Euclid of Alexandria.

As in the case of the other great mathematicians of Greece, so in Euclid's case, we have on eagre particulars of the life and personality of the man.

Most of what we have is contained in the passage of Proclus' summary relating to him [...]. This passage shows that even Proclus had no direct knowledge of Euclid's birthplace or of the date of his birth or death. He proceeds by inference.

This man lived in the time of the first Ptolemy. [...] Thus Euclid must have flourished ca.300 B.C., which date agrees well with the fact that Ptolemy reigned from 306 to 283 B.C.

Thus, if we know quite nothing about it, it is vey difficult that someone can know his face...

In the middle ages most translators and editors spoke of Euclid as Euclid of Megara. This description arose out of a confusion between our Euclid and the philosopher Euclid of Megara who lived about 400 B.C. The first trace of this confusion appears in Valerius Maximus (in the time of Tiberius) who says that Plato, on being appealed to for a solution of the problem of doubling the cubical altar, sent the inquirers to "Euclid the geometer." [...] if Valerius Maximus took Euclid the geometer for a contemporary of Plato, it could only be through confusing him with Euclid of Megara.

The first specific reference to Euclid as Euclid of Megara belongs to the 14th century, occurring in [...] Theodorus Metochita (d. 1332) who speaks of "Euclid of Megara, the Socratic philosopher, contemporary of Plato," as the author of treatises on plane and solid geometry, data, optics etc.: and a Paris MS. of the 14th century has "Euclidis philosophi Socratici liber elementorum."

The misunderstanding was general in the period from Campanus' translation (Venice (1482) to those of Tartaglia (Venice 1565) and Candalla (Paris 1566). But one Constantinus Lascaris (d. about 1493) had already made the proper distinction by saying of our Euclid that "he was different from him of Megara of whom Laertius wrote, and who wrote dialogues "; and to Commandinus belongs the credit of being the first translator to put the matter beyond ,doubt: "Let us then free a number of people from the error by which they have been induced to believe that our Euclid is the same as the philosopher of Megara " etc.

Thus, it is quite clear that the portrait of Euclid by the Dutch painter Justus van Gent, circa 1474, was intended to be a portrait of the geometer, made in a time when he was still known by many as Euclid of Megara.

On the overall issue regarding the re-discovery of Euclid during the Renaissance, see :

In 1505, the Venetian humanist Bartolomeo Zamberti published his monumental Latin translation of the works of Euclid, containing not only the Elements, but also the Phaenomena, Optics, Catoptrics and Data. In his preface, Zamberti acknowledged that his readers would likely want to know something about the author of these works, styled “Euclid of Megara, the Platonic Philosopher” on the title page [page 118].

In 1572, Federico Commandino published a great edition of the Elements to which he prefaced a few biographical remarks. He noted that many had taken Diogenes Laertius’s life of Euclid of Megara to be that of the geometer, so that the author of the Elements was thought to be one of the Socratic philosophers. But, he observed, that could not be the case, since Proclus stated quite clearly that Euclid lived in the time of Ptolemy I: it would be impossible for the two to be the same person.

This is almost certainly intended to be an image of Euclid of Alexandria, not of Euclid of Megara. The image was painted by Justus van Gent, who lived in the 15th century. Among his most famous works is a series of pictures of 28 famous people in history, the uomini famosi ("Famous Men") in approximately 1475. As you can guess, this image was among them. There is actually some debate regarding the attribution of some of these paintings, but that's not particularly relevant here.

Suffice it to say, most of the "Famous Men" really are quite famous, or at least were in the 15th century. They're all portrayed the person in some way doing something for which that person was famous. For instance, here's the picture of Ptolemy; one can immediately tell it is an astronomer by the spherical astrolabe (although to the best of my knowledge it's unclear whether Ptolemy ever developed an astrolabe of any kind). 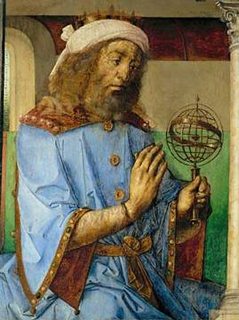 But the portrait of Euclid of Megara is holding a compass, something which would not have been associated to him based on his own works (which were more philosophical than mathematical). Indeed, the inclusion of Euclid of Megara among the other "Famous Men" would seem somewhat strange; his own writings were not nearly as important as the others in the series.

Instead, it seems easy to attribute this to confusion on the part of the painter. Such confusion between the two men was not uncommon; one can find other medieval accounts of the Elements incorrectly attributing them to Euclid of Megara rather than Euclid of Alexandria (see Mauro ALLEGRANZA's answer for more details regarding this).

Not the answer you're looking for? Browse other questions tagged mathematicians debunking depiction-of-scientists euclid or ask your own question.

22
How did Gauss become the "the prince of mathematicians"?
6
Question related to the legitimacy of a certain portrait of Christian Goldbach
8
On Einstein's proof of the so-called Pythagorean theorem
3
Did Kronecker attribute immutable origin to the integers?
1
What did Millikan expect to find when he tried to disprove the photoelectric effect, but proved it instead?
0
Existence of Pythagoras Resources
6
When did Dehn start to work on Hilbert's third problem?
0
Do you know about this anecdote or its source where the mother reads out the letter to Gauss and made him Gauss, the mathematician?