When were problem sets included in Science/math textbooks?

If you look at old books like Euclid, and Archimedes it seems that there weren't any problem set exercises. They just presented the all information. There were no "end chapter" problems. In short, it seems that most ancient books were written as treatises.

However, for contemporary textbooks, they often leave exercises at the end of the chapter, often with no solutions. I wonder when did exercises were appended into textbooks. Specifically, exercises which do not contain answers/derivations.

I conjecture maybe from the the industrial revolution, but that's just my guess. I want to know the palpable answer to this. In other words, I wonder when did books begin to include exercises with omitted solutions.

I can only talk about math books. Problems in the end of the chapters is a British-American custom. German, French and Russian books do not have them. Instead they publish separate problem books, usually by a different author. Problem books contain only problems, and in the introduction they mention which textbook(s) are recommended. British/American textbooks with problems at the ends of the chapters appear since the beginning of 20th century, perhaps there are some late 19th century but I have not seen them.

The most famous problem books in the same subject: Polya-Szego (German), Volkovyski (Russian). On the other hand, there is no such genre as a "problem book" by a British/American author, with very rare exceptions like Halmos.

Here is one data point. (It does not contradict Alexandre's assertion that this is an American innovation, but does provide an earlier starting date.)

Day's Algebra (I picked this volume up in a used book store once.) 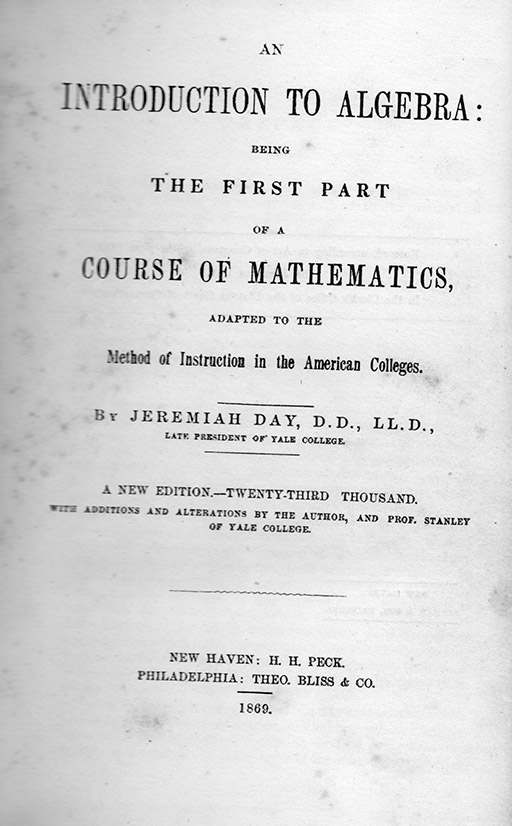 This textbook does have lists of exercises at the end of each section.

Mezopotamian and ancient Egyptian math "textbook" contains only problems and and solution. Something like "Adding a length to a square give 1. What was the number?" followed by actual computation.

It seams that their conception of mathematics was to accumulate solved problems, like astronomers accumulate observations, without never thinking of making a general theory of it.

The first to write a text-book in the modern form was Euclid.

Not the answer you're looking for? Browse other questions tagged education or ask your own question.

1
What were the typical ways students were taught the elements when it remained the prime textbook of mathematics?