What ever happened to the methylphenidate synthesiser and his family?

Leandro Panizzon 1 2 3 synthesised methylphenidate or something like that back in 1944. Ritalin is named after his wife Rita.

He doesn't seem to have a Wikipedia page or anything. What happened to him? I'm guessing he's dead now. When did he die? Any heirs or relatives?

Here you can see how Leandro Panizzon and his wife Marguerite looked in their old age. 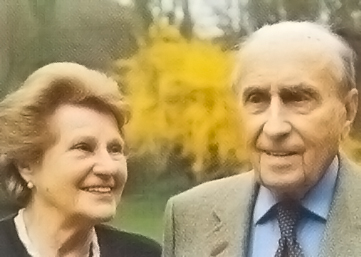 After, as was usual at that time, testing his invention himself with no apparent result, he let his wife have a try (who suffered from low blood pressure). Methylphenidate apparently improved her tennis capabilities. Today it is used not only as medicine, in cases of ADHS (which seems to be a fabricated illness), but also as a drug (called Rita).

In 1950 Panizzon together with Max Hartmann obtained a US patent (number 2507631) for an improved manufacturing method of methylphenidate. In 1954 methylphenidate came on the market. In 2014 Novartis had a turnover of 492 million US-Dollar with Ritalin. In 2013 338 kg Ritalin were sold compared to 23 kg in 1998.

Panizzon got vice-director of his Swiss company Ciba (today Novartis)

The couple had four children.

Not the answer you're looking for? Browse other questions tagged chemistry biology death psychology or ask your own question.

15
When was an eukaryotic cell described for the first time?
36
What new mathematics was inspired by biology and chemistry?
8
Did Darwin ever express his views on eugenics?
2
What is the connection between Lamarck's Mediterranean mussel and the province of Gallia?
6
What insight of Watson and Crick was missed by Franklin?
1
How important were reprints of scientific articles in scientific practice and communications before the copier, the computer and the internet?
7
What were the early uses of differential equations for modeling chemical reactions?
6
How did Jenner and his contemporaries understand vaccination before germ theory of disease?