Who is Hræðraford, the “learned clerk” “writing in modern chemical Latin”?

… in the numerous papers and books whose titles and topics include "irreversible"—the learned clerk HRÆðRAFORD, writing in modern chemical Latin, has recently called their field "thermodynamice inreparabilis"—…

Who is this "learned clerk" Hræðraford? Below, the relevant paragraph is shown: 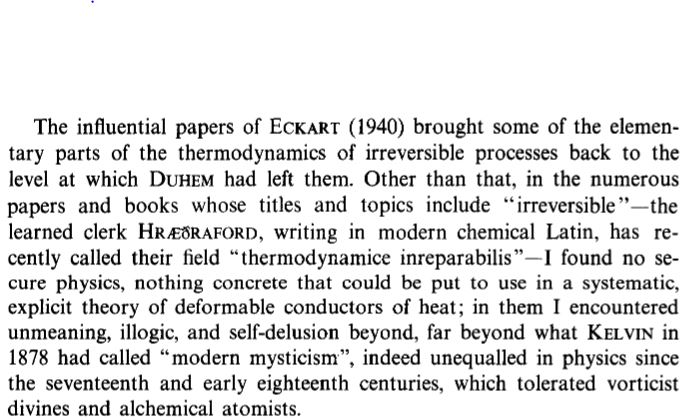 This is not exactly an answer, but too long for a comment. The quote, even in the attached context, is somewhat incomplete. It follows description of the few (including Duhem and Eckart), who in Truesdell's opinion positively contributed to thermodynamics after Gibbs. In other parts of the book he has pages long critique of what he calls "Onsagerism", i.e. Onsager's reciprocal relations in non-equilibrium (a.k.a. irreversible) thermodynamics. Actually, critique is too mild a word, one gets the idea from the second half of the displayed passage. "HRÆðRAFORD, writing in modern chemical Latin" refers not to Hraedraford, whoever he is, so writing (as I originally misread), but to Truesdell writing his name in "modern chemical Latin". The whole passage is dripping with sarcasm about Onsager's formalism and notation.

I was unable to find any references to this Hraedraford, but this is perhaps not so surprising because the only reason he is cited is for a Latin pun on "irreversible": "thermodynamice inreparabilis", the irreparable thermodynamics, which is what Onsager's formalism is in Truesdell's opinion. The "numerous papers and books" are not Hraedraford's either, so he is likely just some witty learned citizen who came up with a pun Truesdell liked. Interestingly, the introduction and Hraedraford in it only appear in the second 1984 edition of Rational Thermodaynamics, the first 1969 edition does not mention him despite already including a chapter long rage against the "Onsagerism" with an approving mention of Eckart.

Not the answer you're looking for? Browse other questions tagged chemistry thermodynamics or ask your own question.

13
Who invented the steam engine: Newcomen or Watt?
6
When were the modern notions of work and energy created
13
What was wrong with the caloric theory?
7
When were the abbreviations of chemical elements standardized?
8
Who invented the mole?
2
Who discovered the Virial Theorem?
6
What were the early uses of differential equations for modeling chemical reactions?
10
Who was the first to weigh chemical reaction products?