When were numbers first used for anything other than counting?

The most obvious occurrence of numbers in nature are the counting (natural) numbers, as they describe how many of something there are. It took a long time for people to even realize that the numbers extended to zero and the non-integers, and even longer for negative numbers, complex numbers, etc.

So if I'm correct in my assumption that numbers arose from people's need to count objects, what is the first recorded instance of numbers being used for any purpose other than counting objects? I'm guessing it was for establishing the geometrical concepts of length and area, but where and when did this first take place?

According to the legend, at some time in VI century BC Pythagoras visited a smith shop and discovered that musical intervals correspond to simple ratios of small numbers. This discovery impressed Pythagoras so much that he concluded that "universe is ruled by numbers". On my opinion, this can be considered the "birth of exact sciences".

Unfortunately, this legend comes from the authors who lived many centuries after Pythagoras and their accounts of what really happened in the smith shop are incorrect. (They did not really understand what they were talking about). Nevertheless we know that this discovery was made at some time very long ago, and this is reflected in the legend.

This is certainly a use of numbers "different from counting".

I am not sure that measuring length belongs to this category. At some later time, in V BC century, followers of Pythagoras made a fundamental and disturbing discovery that you cannot measure length with numbers. (In modern language: that the diagonal of a square is not commensurable with the side). This discovery led to a crisis not only in mathematics but in the whole worldview that "numbers rule the world". The crisis was resolved at the time of Euclid (III BC) in whose book we read "the theory of proportions" which is equivalent to the modern theory of real numbers, but exposed in purely geometric language.

Theory of proportions was used until 19 century. Notice for example, that Newton (and many physics books) do not state the gravity law or the second law of Newton or Hooke's law as a relation between numbers. They do not say that force equals to the product of such and such things divided by such and such things. They only say that something is "proportional" to something. This is a remainder of that epoch which still exists in some physics books.

Modern rigorous theories of real (and complex and other) numbers was created in the second half of 19-th century. They are certainly not designed for counting but for measuring. Certainly people used numbers for measuring in practice since the times immemorial, without any theory.

At least for the ancient Greek world, we can see the Pythagorean idea of the tetractys, the triangular figure made of pebbles, ordered in four rows to form a triangle, which add up to the perfect number ten.

The kernel of pythagorean wisdom is the "tetractys", or "four-group", made up of the numbers $1,2,3,4$ which add uo to $10$. They are representen in a pebble figure, in the form of a "perfect triangle".

It is clearly a way of conceiving of numbers as "real" objects with their own properties, and not only as a "counting device".

I assume that addition of numbers other than $n+1$ is not counting. The first evidence for this gives the famous Ishango bone.

It has three rows of numbers in unary notation which by turning act like a slide rule for addition in that additions like the following additions are solved: 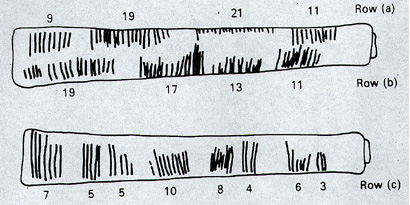 According to Wikipedia it has even been speculated that it works as a lunar calender and that the first mathematician was a woman, but that is not common consensus. Remarkable ist the complete set of prime numbers between 10 and 20 in row b.

Because this question is also semantically interesting, semiotic aspect should be considered as well.

Taken certain signs in the ancient human history were used for accounting, i.e. marking cycles and quantities of objects, same signs could have been used for "anything" else. There is nothing fundamental restricting that.

One can count or express quantity without a written sign, for example by fingers. This already suggests that any symbol one takes, it by default means also something else. A finger is one, one is a finger. When writing systems developed, that continued to apply. For example Egyptian symbols (3000 BC) denoting numerals also meant an heal, a rope, a lily, a frog, etc. In many semitic languages (for example in Hebrew), and others like Greek and Latin, alphabet signs were also numerals. And they still continue to be.

We can see by these examples that numbers, were they ordinal or cardinal, represented other things too from the very beginning. No matter if signs were simple notches made with a sharp object to the other object, or if signs were more sophisticated ideograms or pictograms.

So semantically answering to the question "When were numbers first used for anything other than counting?" I'd say that practice goes before writing systems were established. And it was other way around, abstract numbers came later. Special cases usually become before a general abstraction. But mental ability to abstract the usage of numbers purely as quantities probably evolved also before writing systems so it is hard to tell when it happened. On the other hand it is quite safe to assume that numbers as separate mental signs and entities were strongly evolved along with agriculture and colonization in the Near East between 10000 BC - 5000 BC. In the 4th and 3rd millennium BC Mesopotamia we can find a lot of metrological texts using numbers to purely denote quantities and measures like a length, a weight, and a capacity.

In Babylonian number systems two different strokes made with a wedge were strictly used to denote single digits and powers of ten. There might be an era, where accounting practice related to taxation forced to use numerals in a very strict sense. One can see a wavy tendence to use number symbols purely for quantities, closer we come to our age.

But as noted on other answers, even in 500 BC, Pythagoras promoted the idea of quality over quantity in numbers. So the number abstraction in the sense of strictly meaning only quantity or magnitude never broke totally thru, at least before the modern era. And actually in the modern mathematical notation we hardly ever use numbers, but variables and other abstract symbols instead.

Maybe the question could be elaborated a bit so that we would like to know, when numbers were either used operatively within formulas or grouped to characteristic sets rather than just as physical counter ticks similar to the Lebombo bone or the Ishango bone? We can try to deduce it from the cave paintings and built structures left from the ancient past. But surely we know it only from the written texts in the 4000 BC - 3000 BC that there is a hint of areas being calculated in Uruk [a]. Also big numbers exceeding tens of thousands and millions might suggest that some addition / multiplication operations has been done rather than counting objects one by one. Major corpus of mathematical texts, where numbers were used in complex equations, not just as counters, come from Mesopotamia and Egypt, 1800 BC [b].

a) Pyramids and Cones in Cuneiform and Other Mathematical Texts, Jöran Friberg (1997)

This is an interesting question and after researching this subject it gets even more interesting. First, as I expected the oldest mathematical artifact was found in Africa and you can read about this in detail at this link:

Later, I found some information that adds a twist to your question because their is proven research available that show the ability that animals possess to understand numbers. That being said, the origins of math could have possibly started with another species other than the human race. More information of this claim can be read here:

However, if we are just focusing on the human race, all evidence seems to point to Africa since the oldest bones and mathematical artifact were found there. As for the proof of establishing this research in relationship with geometrical concepts of length and area is debatable. Yet still, your question does hold some merit and notable points because the measurements of length and area are good examples of numbers being used for other purposes other than counting objects.

Not the answer you're looking for? Browse other questions tagged mathematics or ask your own question.

2
What are the earliest mentions of Prime Numbers?

15
Have numbering systems other than base ten ever been used or popular?
34
What is so mysterious about Archimedes' approximation of $\sqrt 3$?
8
What were Riemann's other two submissions for his habilitation?
5
When and by whom were the different symbols for multiplication used?
2
Mathematics development can sometimes **exceed** the practical needs, right?
5
When were polynomial equations first factored?
2
Material on the History of Mathematical Spaces
4
Has any large group of people used a base other than 10, 20 and 60 for ordinary purposes?
1
Who first used the Completeness Axiom for real numbers?