What is Ptolemy holding in this picture?

I would like to know the name of the device Ptolemy is holding in the following picture. 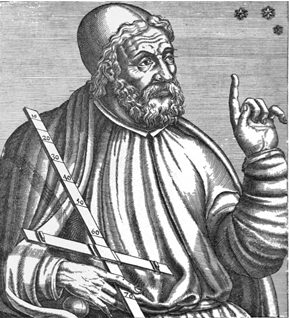 It is called "Jacob's staff". It was an old astronomical tool used for trigonometric purposes.

This device was invented by a Jewish Rabbi, Levi Ben Gershon. It was used to measure the angular distance between two stars or, in general, any pair of celestial bodies. Ptolemy lived 1000 years before the invention, so this is only the product of the artist’s fantasy.

And this tool has been known under many other latin names than baculus Jacob (or Jacob's staff): radius astronomicus (astronomic ray), crux geometrica (geometrical cross), revelatorem secretorum (secret decipherer). This one is the hand-held version, a mounted version exists.

A collection of studies on Gersonides (or Levi ben Gershon) is found in G. Freudenthal (ed.), Studies on Gersonides. A Fourteenth Century Jewish Philosopher. And in the more accessible 1981 paper by J. Roche, The radius astronomicus in England, Annals of Science, vol. 38:

Abstract: This survey traces the history of the astronomer's cross staff on the Continent from Levi ben Gerson to Gemma Frisius, in England from John Dee to John Greaves, and again on the Continent from Tycho Brahe to Adrian Metius. The emphasis throughout is on sources and influences, on distinguishing the various kinds of cross staff, and on clarifying terminology.

It has been used in navigation, perhaps as an upgraded version of the kamal, a rectangular wooden card combined with a string equiped with several equally spaced knots, a navigation device that determines latitude.

Not the answer you're looking for? Browse other questions tagged geometry ancient-greece antiquity ptolemy or ask your own question.

18
Did Archimedes use epicycles in his planetarium?
11
A knot cannot be tied in 4-dimensions, but when was this conjectured and proven?
2
How did Ptolemy calculate the distance to the Moon?
0
What is the story behind the recently discovered gear fragment of Olbia?
6
Where did Ptolemy compare the Earth to the distance of fixed stars?
6
Did Archimedes view fractions as "numbers"?
0
What happened to the original sources of Euclid's Elements?
4
What is the origin of the "problem of Brahmagupta" of constructing inscribed quadrangle with given sides?