Hippocrates was able to construct the quadrature of three different lunes. Euler found two more squarable lunes. Tschebatorew and Durodnow showed that these five are the only squarable lunes.

Although Archimedes quadrature of the parabolic segment uses the method of exhaustion, the resulting formula, $\frac43 T$, does enable the finite construction of the square, so I will assume that this is a legitimate Euclidean quadrature.

Q: In antiquity, did anyone manage to square any other curved figures in the plane using only a finite straightedge and compass construction?

The first such curve was known even earlier, the quadratrix. Originally it was devised to trisect angles, and termed the trisectrix, by Hippias (c. 450 BC), a sophist derided by Plato in his dialogues for excessive vanity. About a century later Dinostratus adapted it to squaring circles, and renamed it into the quadratrix, that is all we know of him. Since the quadratrix can be used to square circles, by design there are parts attached to it that can also be "squared with straightedge and compass".

On the other hand, Archimedes states in On Conoids and Spheroids that an ellipse is to the circle with its major axis for diameter, as its minor axis is to the diameter, which gives $\pi ab$ for semi-axes $a,b$ in formulaic modernization. But we would have to say that ellipse is not "squared with straightedge and compass", because the said circle can't be.

So we have a kind of hierarchy: lunes are both produced and squared by straightedge and compass, parabola must be drawn but can then be squared directly, quadratures of ellipse and spiral directly reduce only to the circle quadrature, but in the case of the spiral the circle can then be squared, if we are allowed to use it one more time. Parabola is a degenerate conic, circle and ellipse are non-degenerate ones, and Archimedean spiral and quadratrix are transcendental. But the pattern breaks down with hyperbola, areas under it require logarithms, and therefore do not reduce to the circle quadrature, see How did Saint Vincent prove the logarithmic property of areas under hyperbolas? Still, St. Vincent does prove the "logarithmic property" by Archimedean methods.

Greeks also knew some algebraic curves of degree higher than two, e.g. cubic cissoid of Diocles and quartic conchoid of Nicomedes, Newton's favorite, but those were only "squared" in modern times. For example, the area under the cissoid by Huygens and Wallis in 1658, even though like ellipse it reduces to circle quadrature. In modern terms, the "real" pattern is complicated not only by the structure of anti-derivatives of algebraic functions, but also because some definite integrals are expressible in square radicals even when anti-derivatives are not.

Andeans used this system since 5,000 y.a. diagonals were taken as geometric integers. It is present in Ancient Egypt and Caral. 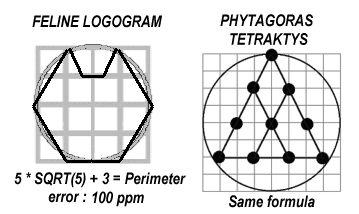 The feline was used in the Andeans and Egypt. Pythagoras used the same...

4
How did Saint Vincent prove the logarithmic property of areas under hyperbolas?

3
History of impact of non-Euclidean geometry on math, philosophy, and the public
3
What is the history of angle quintisection (division into five equal parts)?