How did USA become world leader in STEM?

Looking in the past we can easily see that it was Europe who made most of the discoveries in STEM but today USA triumphs in this area. So, how did this shift took place and what were the reasons for the emergence of USA as the pioneer in these fields leaving behind Europe and other countries?

interesting question for historians, a bit like "why did Rome fall?" my guess:

as for the future, who knows?

one more point: the cold war. the 50s and 60s saw a huge govt investment in universities and tech generally, mostly military-driven. today it's easy to overlook just how serious the cold war was back in the day. Think "Cuban missile crisis". The space program that put a man on the moon was largely driven by cold war fears of Soviet technical domination.

So, how did this shift took place and what were the reasons for the emergence of USA as the pioneer in these fields leaving behind Europe and other countries?

Other answers point to World War 2. The US's rise in science, technology, engineering, and mathematics started prior to WW2. I'll start with the pre-WW2 developments follow through to the end of the 20th century.

The US's rise in engineering started with the birth of the country. At the very start, American interests saw the advantage in interchangeable parts and its subsequent offspring, mechanization and the assembly line. This came to forefront in the late 1860s in the Chicago meatpacking industry and in multiple places that manufactured arms for the American Civil War. This dominance became apparent in 1913 with Henry Ford's Model T.

The US remained a backwater in the sciences until the mid 1930s. (The US did however produce some remarkable astronomers prior to this time.) What happened to the US in the 1930s was fascism in Europe. Germany was the world leader in much of the physical sciences throughout the 19th century and up until the mid 1930s. Fascist laws forced many of those European scientists to emigrate to the US. The list includes Hans Bethe, Albert Einstein, Enrico Fermi, John von Neumann, Leo Szilard, Edward Teller, Stanislaw Ulam, Eugene Wigner, and many others. It's dubious whether the US would have been able to build the bomb without those European scientists.

World War II was a great impetus to US dominance. American engineering helped build the massive amounts of machinery needed to sustain that war effort, and the European scientists helped build the two machines that ended that war. In the immediate aftermath of that war, the US extracted 1500 German scientists, engineers, and technicians via Operation Paperclip, including Wernher von Braun. It's dubious whether the US would have been able to send men to the Moon in the 1960s without the help of those German emigres.

In the meanwhile, WW2 devastated much of Europe. The US built machinery and technology while Europe struggled to rebuild its basic infrastructure. This advantage continued and grew for decades after WW2 ended.

The US developed the concept of the assembly line automobile manufacturing, enabling the US to dominate the automotive market for over half a century. That early dominance set the US back later on in the 20th century. Late 20th century American cars were nowhere close to best of class. Asian and European automobile manufacturers became better at making economical cars, luxury cars, and everything in-between compared to their American counterparts. So, yes, there's a precedence for a shift from the USA to elsewhere.

A big boost in activity for WWII, rolling over into massive government support in the cold war and then the concentration of US venture capital in Silicon Valley today.

Not necessarily clear that it is still as much a leader today or tomorrow. Don't have the statistics at hand but it may not be at the forefront of funding / numbers of students / number of papers etc today.

The shift to other countries being the STEM leaders these days is already happening.

China, by 2017, put in 49% of all patent applications of that year, but also more than every other country in most categories. Meanwhile, US dominance has never been as strong since at least 2000 with different fields generally dominated by different countries (incl. Germany, South Korea, and Japan). Of course, this doesn't mean there can't be reversions, but there is at least a trend for Asian countries to innovate more. [Patent Wars, Nikkei]

After analyzing patent application data in 10 categories, including artificial intelligence and quantum computing, Nikkei has concluded that China will reign supreme in nine categories. Chinese tech giants Baidu and Alibaba Group will be the major innovators. Meanwhile, 64 of the global top 100 companies in terms of patent quality will be American. 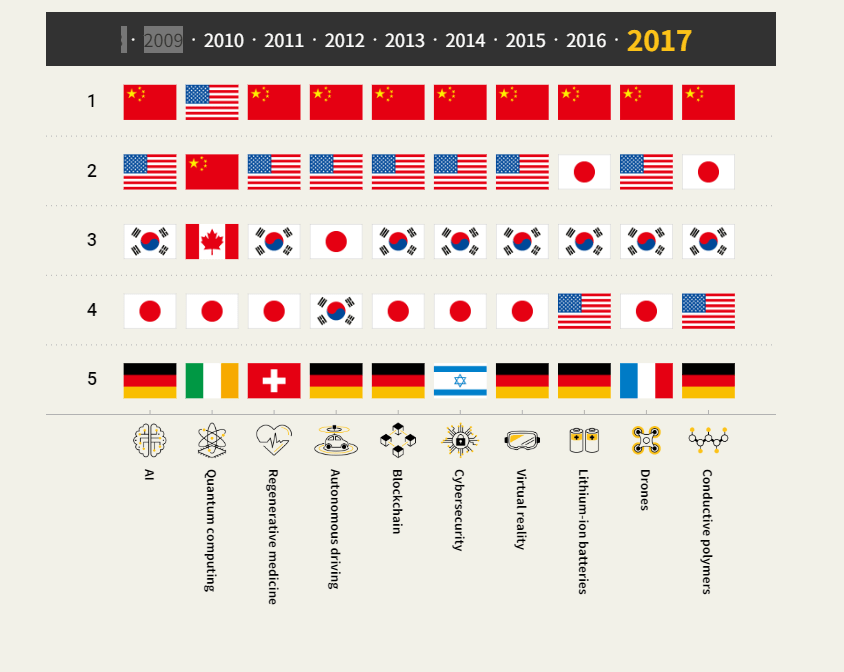 Not the answer you're looking for? Browse other questions tagged discoveries depiction-of-scientists academic-awards or ask your own question.

24
When did the names of scientists first become the names of scientific units?
22
How did Gauss become the "the prince of mathematicians"?
12
How did prisoners of war discover scientific breakthroughs while interned?
5
How long did it take to prove that the Earth revolves around the Sun?
4
How and when did we discover the role of the brain?
5
How did chemists figure out atomic weights, when hydrogen, etc., were first discovered?
7
When did architects first become aware of the usefulness of the catenary arch?
2
How did Ruffini discover his method of polynomial division?