According to what we read in footnote #2 of [I], no portrait of Christian Goldbach seems to be known. The author of the article under consideration even adds:

... Juskevič & Kopelevič's biography states that none exists [J&K, Christian Goldbach: 1690–1764 (translated from Russian to German by Annerose and Walter Purkert, Vita mathematica, Band 8). Basel: Birkhäuser Verlag, 1994, p. xi], also confirmed by Gerald Alexanderson (personal communication) and Goldbach conjecture expert Yuan Wang (personal communication), who explained that Goldbach was not famous at the time... But Goldbach did in fact eventually attain high rank in the Russian government, first as tutor to the crown prince, then later rising to privy councilor... He was also important for many years at the Petersburg Academy, which did include artists (including both Euler’s brother and the father of Euler’s wife). I therefore hope that a picture might yet be found, though perhaps in a government or art historical collection rather than in scholarly archives. As motivation, I hereby offer a bounty of $100 for the first authentic picture of Goldbach (or complete correct proof of the Goldbach conjecture) that I receive!

On the other hand, it is not rare to find web sites on the internet (e.g., 1) http://eljjdx.canalblog.com/archives/2012/08/05/24787409.html, 2) http://images.slideplayer.com.br/3/382572/slides/slide_5.jpg, 3) http://gaussianos.com/la-conjetura-debil-de-goldbach-coloquio-de-harald-helfgott-en-el-icmat/, 4) http://paginas.matem.unam.mx/cprieto/index.php/es/matematicos/matematicos-f/126-goldbach-christian, 5) http://www.alasayvan.com/bilim-adamlari/400020-christian-goldbach-kristiyan-goldbah-ve-matematige-katkilari.html) that imply that Christian Goldbach was this fellow: 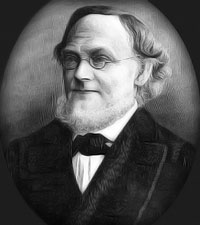 It follows that either Mr. Haas's sources are somewhat obsolete or the individual in the portrait is actually not Christian Goldbach.

What do you people know about this matter?

By the way, this theme has made me recall an amusing 2009 note in the Notices of the AMS about a similar situation related to a portrait that for many individuals in the past was A. M. Legendre's (cf. [II, pages 1440-1443]).

This image is certainly not of Christian Goldbach. It is attributed to Hermann Grassmann in all reliable sources I am aware of, and I see no reason to doubt that Grassmann is indeed the one pictured. The text From Past to Future: Graßmann's Work in Context uses it as a cover photo, as do many other texts on Grassmann. It seems to be taken from an 1874 xylograph after a photograph based on the attribution in that text.

There are several reasons we can tell it is not Goldbach. One is that photography was not even invented in Goldbach's time. The earliest attempts at photography were in the early 19th century, and the earliest known photographs are from the 1820s (It didn't become practical until around 1839). Goldbach died in 1764, long before even the earliest known photographs. But the image is quite clearly a photograph, rather than the work of an artist. In addition, the style of dress in the image is very much in the character of 19th century fashion, rather than 18th century. If that isn't enough, doing a Google reverse image search on the image gives the result of Grassmann; while that isn't an indication that the image is actually of Grassmann, it shows that the internet consensus points to him, casting further doubt onto the (relatively) few sources which identify this image as Goldbach.

I doubt any serious historians have bothered to investigate why the two men have been so confused on the internet or where the confusion started. It's likely this mistake has not made its way into the print literature at all, given how easy it is to disprove, but it continues to propagate on poor websites with flimsy fact-checking. It could easily be a case of some writer simply doing an image search for Goldbach, finding an image of Grassmann on some page which discussed both of them, and not bothering to check who was actually in the image (or indeed do any sanity-checking at all). One can find similar confusion today between Goldbach and this picture of Riemann (see here) as well as several images of Euler, and once one writer makes a mistake on the internet (or indeed anywhere), it tends to get copied among sources with weaker fact-checking. In any case, it certainly doesn't require serious research to falsify the claim that the image is of Goldbach; common sense does just fine here.

As for the question of whether images of Goldbach exist, I believe there is still no known image of him. However, this is based as much on a lack of evidence to the contrary as actual support. I'd imagine that if an image of Goldbach were found, it would be at least big enough news to get a news article or notice written somewhere. After reasonably extensive searching, I have found no such article. In fact, the fact that Google is still highly indexing images of other mathematicians on searching for Goldbach is reasonably strong evidence that no image of Goldbach is known to the internet at large.

Our recent edition of Christian Goldbach's correspondence with Leonhard Euler (Leonhardi Euleri Opera Omnia, series IVA, vol.4, Springer: Basel, 2015) has a short biography of Goldbach (Introduction 1.1, p.3-12); thus I had reason to check again whether an authentic portrait might exist.

I still haven't found one, but besides the Grassmann photograph - where the confusion seems to be due to an alphabetic list of mathematicians -, another spurious one has been published in the meantime: M.B.W. Tent's nice book on Leonhard Euler and the Bernoullis (A.K.Peters: Natick, Mass., 2009) shows on p.151 the reproduction of an engraving. However, the caption "Duque da Terceira" is even discernible on this image: indeed, the person depicted is the Portuguese general and statesman Antonio José de Sousa Manuel de Meneses Severim de Noronha, Duke of Terceira (1792-1860). In this case the misinterpretation is due to a Brazilian memorial website listing both persons under their common birthday, March 18th.

A little causerie I gave on the 250th anniversary of Goldbach's death - proposing, with a wink, yet another dubious likeness of the scholar from Königsberg - can be found (in German) on the website of the Bernoulli-Euler Center at Basel (https://bez.unibas.ch/dokumente/Mattmueller-Goldbach.pdf).

As a caution to anybody wishing to offer a prize for an authentic Goldbach portrait, I'd mention that a painting from 1776 portraying his colleague Daniel Bernoulli, thought to be lost for a long time, has recently been rediscovered at the Archangel'sk Museum of Fine Arts and used for the frontispiece of vol. IVA 3 of the Euler Opera which has just been published. There is currently also a rumour that a portrait of Euler's wife Katharina Gsell (1707-1773) has been identified. So there's reason never to be too positive about the non-existence of images or documents!

Not the answer you're looking for? Browse other questions tagged debunking depiction-of-scientists or ask your own question.