In (the AMS Chelsea Publishing version of) what is perhaps the first genuine textbook on graph theory ever, Dénes Kőnig on p. 28 gives the illustration 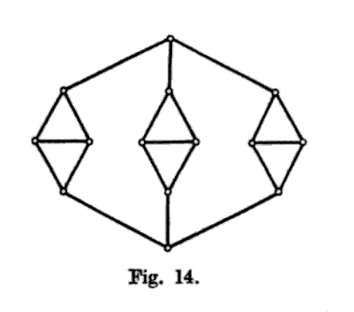 which when translated says

Since the graph in Fig. 14 can be drawn in the plane (on the 2-sphere), this graph constitutes a simple counterexample to a false claim that is frequently recurring in the literature on the Four Color Theorem, cf. e.g. as late as 1930: Jahresbericht der deutschen Mathematiker-Vereinigung, 39, S. $\textit{51}$.

Kőnig here is referencing the following text, which I take from this electronic version of the Jahresbericht der deutschen Mathematiker-Vereinigung (note that in those days this journal had what a model theorist may be tempted to call 'typed' or 'sorted' page numbers: there were upright page numbers, and there were pages numbers in italics, the latter were used for the appendix.

Schoblik's text is roughly of the genre 'research announcement' or rather 'extended abstract', and it was published as part of the proceedings of the annual meeting of the DMV in Prague, 16.-23. September 1929: 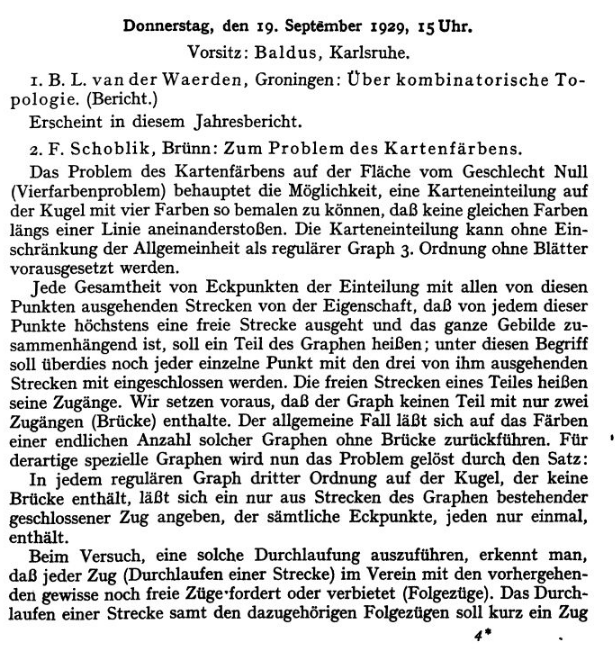 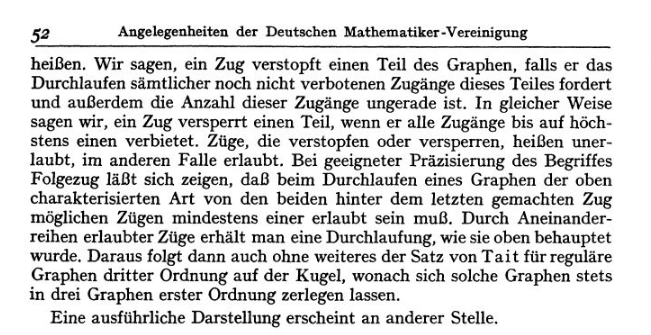 I now give a literal translation of Schoblik's extended abstract

F. Schoblik, Brünn: On the problem of coloring maps.

The problem of coloring maps on a surface of genus zero (Four Color Problem) asserts that it is possible to color a map on the 2-sphere with four colors in such a way that no two like colors abut along any line. One may assume without loss of generality that one is coloring a 3-regular graph without 'Blätter' [I do not know what Schoblik means here; literally 'Blätter' means 'leaves', which does not make sense if one would understand this in the contemporary graph-theoretic sense of 'leaves', since a 'leaf' is just a vertex of degree precisely one, of which a 3-regular graph does not have any]. Every set $S$ of vertices of the graph, together with all incident edges, which has the property that every vertex of $S$ is incident with at most one 'free' edge [I am not sure what Schoblik means here; presumably he means that every vertex of $S$ has at most one neighbor outside $S$], shall be called a part of the graph; moreover, each single vertex together with the three incident edges, shall be subsumed under the term 'part', too. The 'free' edges of a 'part' are called its accesses. We assume that the graph does not contain any 'part' with only two 'accesses' ('bridge'). [Schoblik's claim that 'bridgeless' were equivalent with non-existence of any part with two 'freie' edges seems wrong, unless I misunderstand his definition of 'freie' edges: a bridge in a graph may have any cardinality of 'freie' edges, if 'freie edges' is understood to mean 'edges incidence with the bridge]. The general case can be reduced to coloring a finite number of bridgless such graphs. For such special graphs, the problem is solved by the following theorem:

When trying to traverse such a sequence of edges it becomes apparent that every traversed edge, together with the preceding edges, requires-or rules out-certain edges among those which are still eligible (we call such edges 'successor edges') [I find it confusing that Schoblik seems to permit that a 'successor edge' may either be of type 'required edge' or of type 'ruled-out edge']. The traversal of an edge, together with all the accompanying 'successor edges' may briefly be called a 'walk'. We moreover say that a walk obstructs a 'part' of the graph if it 'requires' the traversal of all heretofore not forbidden 'accesses' of the relevant part, and if moreover the number of those [required-yet-not-yet-forbidden] 'accesses' is odd. Likewise, we say that a walk 'blocks' a 'part' if it 'forbids' all but at most one of the 'accesses' of the part. Walks which 'obstruct' or 'block' are called impermissible, otherwise, permissible. If the notion 'successor edge' is made suitably precise, the one can show that if a graph of the above-mentioned kind is traversed, then of the two possible edges after a single-edge-traversal, at least one must be permitted. By concatenating permitted edge-traversals one obtains a closed sequence of edges of the kind claimed above. This immediately implies the theorem of Tait for 3-regular graphs embedding in the 2-sphere, according to which any such graph can be decomposed into three 1-regular graphs [=matchings].

A detailed presentation will be published elsewhere.

whose publication was delayed until 1951 (when it was edited by Friedrich Lösch).

Apparently Schoblik in 1944,went missing in what (a search engine translation of) the biographic article cited above calls "the Eastern Front".

1 Yet evidently the graph in Fig. 14 is not vertex-3-connected, hence is not a polyhedral graph. In particular, what Schoblik claims is stronger than the also-wrong-but-disproved-ten-years-after-Kőnig's-footnote Tait's conjecture.

Browse other questions tagged mathematics biographical-details combinatorics or ask your own question.

5
Examples of abstract proofs that turned out to be false

11
How and when was Bolzano's proof of the Bolzano-Weierstrass theorem rediscovered?
6
Who discovered the topological proof of Nielsen-Schreier theorem?
8
On Einstein's proof of the so-called Pythagorean theorem
7
Diagrams in early Mathematical Paper Publication
7
Did Gauss know Jacobi's four squares theorem?
2
Reference - Schwarz's Proof of Clairaut's Theorem
5
Meaning of a cryptic sentence by Gauss on “the mobility of figures in the hyperbolic plane”
0
Was there a more intuitive early proof of the generalized mean value theorem?