Is it known where Eratosthenes first heard of the "well of Syene"?

Eratosthenes had heard from travelers about a well in Syene (now Aswan, Egypt) with an interesting property: at noon on the summer solstice, which occurs about June 21 every year, the sun illuminated the entire bottom of this well, without casting any shadows, indicating that the sun was directly overhead. Eratosthenes then measured the angle of a shadow cast by a stick at noon on the summer solstice in Alexandria, and found it made an angle of about 7.2 degrees, or about 1/50 of a complete circle. (emphasis added)

However in this small video clip titled Carl Sagan - How We Know The Earth Is Round, Prof. Sagan describes it differently. Here is a transcription of a small bit after the 01:00

He was also the chief librarian of the great library of Alexandria, and one day, while reading a papyrus book in the library, he came upon a curious account: Far to the south, he read, at the military outpost of Syene, something notable could be seen, on the longest day of the year. (emphasis added)

I understand there might not be certainty, but is there some general agreement if it was the words of travelers, or a book in the library where Eratosthenes first heard of the "well of Syene"? Of course, it's also possible that the book was written by travelers, and so the two descriptions are not necessarily contradictory. 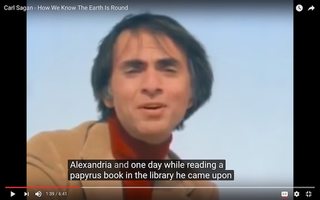 The earliest extant description of Erathostenes' method is found in a book by Cleomedes written in the 1st century BC, and no wells are mentioned at all, if it's true that it's stated that whenever the Sun, 'being in Crab at the summer solstice, the pointers of the sundials in Syene throw no shadows...'

Not the answer you're looking for? Browse other questions tagged astronomy measurement ancient-egypt or ask your own question.

20
Who first measured the distance to the Moon? How was it done?
5
Was the steam engine really known in ancient Egypt?
1
How and when did the Titius-Bode rule first become known as a "law"?
2
Where are the mirrors of the historic telescopes today?
8
How did Eratosthenes determine that Alexandria and Syene were on the same meridian?
2
Where to find some early discussions of the Equinox(es)?
3
When was the speed of a bullet or cannon ball first measured?
1
Where is the Troughton scale kept?