(bibliographic) Are there recommendable, preferably modern, detailed and technical discussions in the literature on the kind of consistency proofs that Otto Blumenthal mentions Hilbert proposed in 1904 in an address to the third ICM in Heidelberg?

(philosophical) Do you think it is meaningful to distinguish between the following three, given in chronological order, essentially different kinds of consistency proofs:

(mathematical) Do you know a specific mathematical reason for and/or discussion in the literature of Blumenthal's verdict "unzulänglich"? 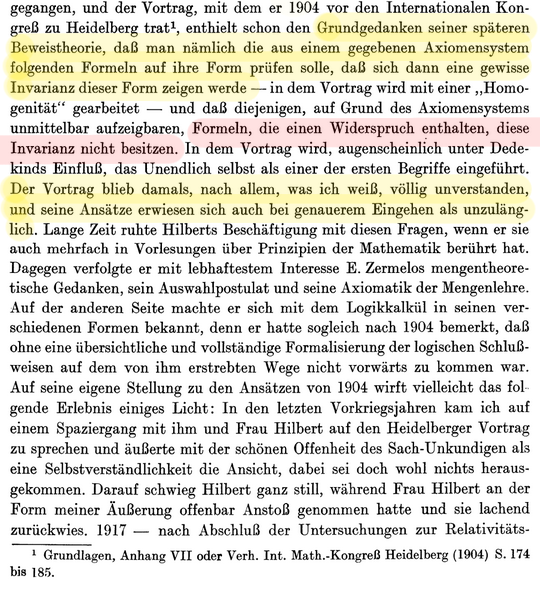 The highlighted passages can be translated thus

[...] basic idea of his later proof theory: that one should examine the form of the formulae that can be deduced from a given system of axioms, and that then a certain invariance of this form would become apparent [...] formulas which are contradictory do not exhibit this invariance [...] the talk remained, for all I know, completely ununderstood, and the approaches proposed in the talk turned out to be unsuitable upon a closer examination

Bibliographic remark. The published version of Hilbert's 1904 ICM talk at Heidelberg was published in the proceedings of the conference:

and there is at least one translated version:

1 This term is not attested and was invented for the present question.

In regards to your bibliographic question, I suggest the highly informative essay by Craig Smoryński, Hilbert's programme; he gives a highly compressed account of Hilbert's 1904 proof on pp.7-8 of the pdf file (pp. 9-10 of the paper), including some commentary on its limitations.

In regards to your "philosophical" question, first, note that, if Smoryński is right, then Hilbert's 1904 proof is not exactly like the idea you suggested, since there is no need to invoke group theoretic ideas. Rather, the "invariant property" claimed for the axioms and theorems is that of being homogeneous equations, that is, equations whose equated terms have the same number of symbols. And the proof here is a simple induction on the length of proofs: the axioms are all homogeneous equations, and the rules of inference also take homogeneous equations to homogeneous equations (this is immediate by inspection, if you look at the axioms and rules on p. 7 of the pdf). This shows that the the system is consistent because it's clear that, say, 0=S(0) is not homogeneous, so the system can't derive that particular equation. Although very primitive, this is essentially the idea behind Gentzen's consistency proof of the first-order sequent calculus: cut elimination shows that every canonical proof has the subformula property, and any purported derivation of a contradiction would not have this property (because a contradiction, in the sequent calculus, has no subformulas---unfortunately, as is well-known, this strategy won't work for Peano Arithmetic).

Not the answer you're looking for? Browse other questions tagged mathematics mathematical-logic or ask your own question.

3
Did Kronecker attribute immutable origin to the integers?