When and why did the 'spiky star' appear as an image in art and science?

Telescope images of stars look like crosses, although they are point sources of light. Featureless dots. Diffraction along the vanes of the support structure that holds up their secondary mirror is what causes this optical distortion. And makes the stars look as if they have these beautiful spikes, like a painted compass on an ancient map.

But why would anyone before Newton, who invented the refracting telescope, have perceived a star as having spikes? Did anyone? The spikes aren't visible by the naked eye, are they?

Were stars depicted as having spikes before Newton, or before any telescope?

Did astronomers, like Tycho Brahe, mark the location of a star on the sky map with a cross (an asterisk) for clarity, and did that "typographically" lead to the star shape we all use to celebrate Christmas?

Not to go into the specifics of this here, but to exemplify: What about the pre-Newton "star of David"? Was it originally really intended to depict a "star" as in an observable star on the sky? Or was it just a geometric figure, later called "a star"? And what about the pentagram of the Devil in Catholicism, was that originally in any way a star related symbol? And not the least the islamic star next to the new moon. Why is that spiky? Did these symbols really refer to a star in the sky when they were created? And if so why their spikes?

Here are some Roman Denari. Moon and stars. Looks like points on the stars. 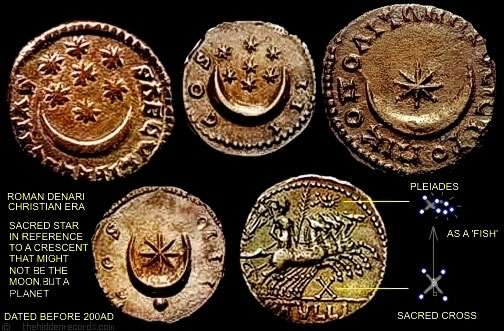 Not the answer you're looking for? Browse other questions tagged optics archaeoastronomy ancient or ask your own question.

5
When was the optical effects of air pollution first measured, and by whom?
4
Why did the ancients believe celestial matter was of a different type than terrestrial matter?
5
Who was first to observe or detect photons in the double slit experiment, and how did they do that?
3
How did Gauss overcome the problem of curvature of sunlight rays when he developed his heliotrope?
9
When did people realize that the eye was a lens?
1
When and how was it discovered that the sun was in different positions depending upon longitude?
4
When did the Notion of "Limit" Arise and for What Purpose?